The new Spider-Man movie hits theaters on July 3rd, and despite Toby Maguire’s incarnation occurring just 10 years ago, the series will once again start from scratch. This weekend is the perfect opportunity to catch up on your spidey knowledge, and what better way to prep for a movie series that is currently getting a fresh start than with the comic book that did the same?

Spider-Man is a very difficult super hero to jump into. Unlike many other titles that often get their own special projects dedicated to them like Batman or Superman, Spider-Man has managed to run as a single title for decades without ever recieving much outside attention. Although he does often appear in larger team-ups, he tends to be a peripheral character or at least not the star of the show. Thus, the only way to read spiderman is to start at the beginning. And if you want to do that, you have to dredge through 50 years of back issues to play catch-up.

Luckily in 2000, Marvel finally figured out that their comic books were becoming too inaccessible for readers who wanted to start right now. The arcs were convoluted, the stories difficult to navigate, and most importantly, the comics were getting harder and harder to find. In order to solve the problem, they decided to start from scratch; and so Ultimate Spider-Man was bitten.

Ultimate Spider-Man starts off exactly where you want to begin your exploration into wall climbing and web swinging; when Peter Parker is nothing more than an average kid. From there, we run into all the classic characters as well as the villians that have come to define the series. However, there are some minor detail changes (for instance, Parker is a high school student), but the overall message of the book holds true to the original. One of the highlights of this “Ultimate” rendition are the new looks and costumes for many familiar characters; old and retro is traded in for an updated 21st century sleek kind of evil, as well as great artwork to match. For example, here is the Bagley’s take on the classic villain “The Green Goblin”: 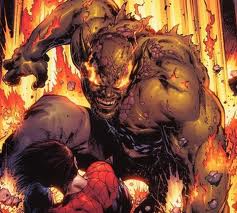 Don’t worry, this isn’t just some lame quick-shot series trying to drag in new readers with a do-over. Since it’s creation, writer Brian Michael Bendis has led Ultimate Spider-Man to some pretty impressive recognition. He received the Eisner for best writer in 2002 and 2003 and was selected as the writer of the year by Wizard Magazine from 2000-2004. The comic is illustrated by Mark Bagley who does a great job of modernizing Spider-Man and dragging him out of the golden ages. Bagley has a stylish look to his work that is so light and easy to read that it accentuates the story being presented by Bendis. The two play off each others strengths to make Ultimate Spider-Man a new standard that appeals to both fans of the original series and those looking to start fresh with the web crawler.

Additional Notes
Ultimate Spider-Man is dirt cheap (usually $10-$15 per graphic novel) and can also be purchased in larger omni-bus editions. It is a standard shelf item in any comic book shop and is very easy to get your hands on.

Bagley left after issue #133 and was replaced by David Lafuente, but this was short lived (the series was cancelled roughly 30 issues later). If you end up getting this deep into the series, I would recommend calling it quits when Bagley does – there is usually a reason a writer who has worked on a project for 9 years would jump ship. Still, there’s plenty of reading to do before then, walls to be climbed, and responsibility to be mulled over by your friendly neighborhood Spider-Man.

The Amazing Spider-Man
Last but not least, here is the newest trailer for the upcoming film The Amazing Spider-Man, featuring Andrew Garfield as spidey and Emma Stone as Gwen Stacy. Let’s just hope it isn’t as bad as Spider-Man 3 (which includes a full-on jazz club scene reminiscent of Anchorman), although i’m not sure that is even possible. And judging by the latest movies Marvel has been producing such as The Avengers and Iron Man, that is probably the least of our worries. Dr.Conner aka “the Lizard” on the other hand, now THAT is something worth losing sleep over.