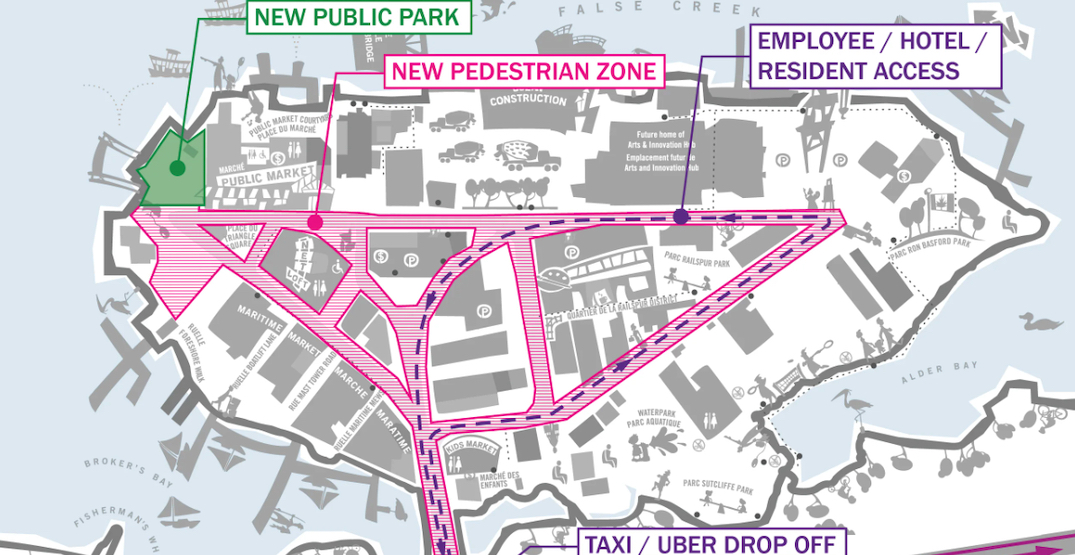 Option 1 of a full car closure on Granville Island for pedestrians. (SaveGranvilleIsland/Reddit)

Would a car-free Granville Island make the crowded attraction a more pleasant experience that also supports the vitality of businesses, especially during the busy summer peak season for local visitors and tourism?

This new idea being floated on Reddit by a new user, aptly named SaveGranvilleIsland, is attracting much attention, complete with thoughtful explanations of the approach and even semi-professional diagrams.

Such a configuration would be temporary, on weekends only, for the reason that it can be very easily and cheaply implemented, requiring traffic barriers and traffic guards, security or police directing traffic.

A permanent change is deemed to be much more complex, given that Granville Island is home to the Ocean Concrete plant, some homes, and businesses, including hotels.

The first option would be turning Granville Island into a full pedestrian zone on weekends, with no cars permitted on the island past the “Granville Island” sign on Anderson Street access road underneath the Granville Street Bridge. But there would be exceptions for workers, hotel guests, and residents.

A taxi, rideshare, and accessible drop-off loop would be created on Anderson Street, where the street is blocked off. 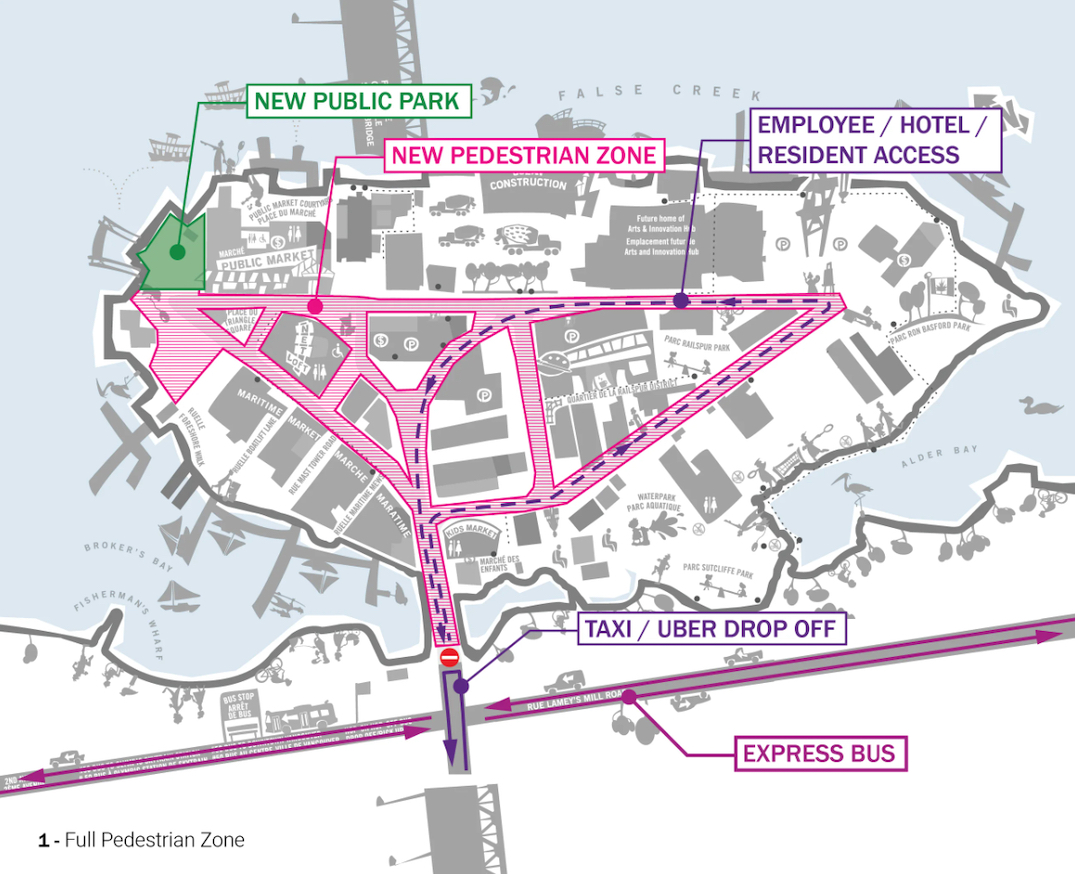 Option 1 of a full car closure on Granville Island for pedestrians. (SaveGranvilleIsland/Reddit) 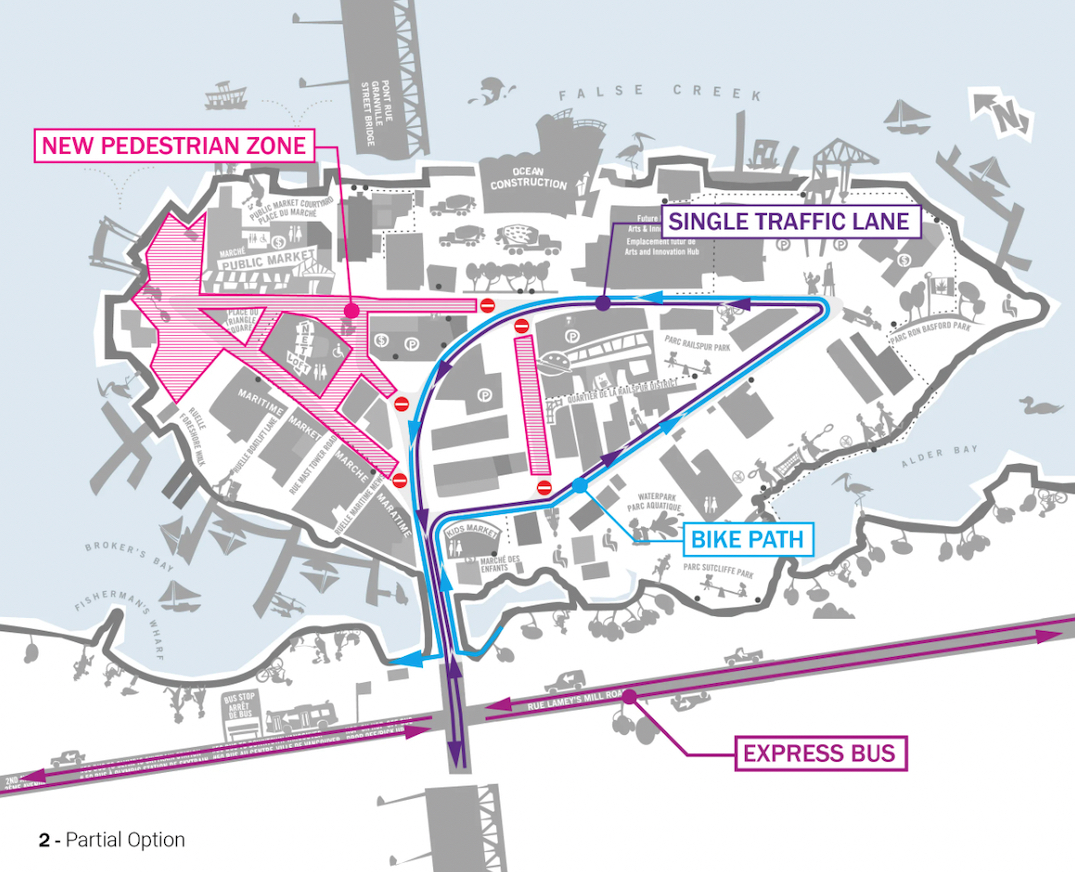 Option 2 of a partial car closure on Granville Island for pedestrians. (SaveGranvilleIsland/Reddit)

To mitigate the lost access for vehicles, it is proposed that both options could consider a frequent, express bus reaching Granville Island from SkyTrain’s Waterfront Station and Olympic Village Station, such as upgrading TransLink’s No. 50 Waterfront Station/False Creek South route. Anyone arriving by vehicle could park near Olympic Village Station.

Artistic rendering of a park replacing a surface parking lot on the west side of Granville Island, near the Public Market. (SaveGranvilleIsland/Reddit)

Granville Island is owned and operated by federal crown corporation, Canada Mortgage and Housing Corporation (CMHC). In 2019, CMHC established the Granville Island Council, which is a board that gives locals more decision-making powers and influence over the strategic direction of the island, including budgeting, planning, and long-term strategy.

The ideas outlined by SaveGranvilleIsland are already part of CMHC’s 2017-created Granville Island 2040 vision, which has improving access and public spaces as two of its four pillars. But the vision is not associated with funding, and much of it relies on third parties, including TransLink and the City of Vancouver.

For instance, the vision highlights the benefits of bringing back the Olympic Line Streetcar that was temporary installed during the 2010 Olympics along the railway right-of-way in False Creek South between Olympic Village Station and Granville Island.

The City of Vancouver has a long-term vision of reinstating a downtown Vancouver, False Creek, and Arbutus Greenway streetcar network, with the False Creek South leg running from near Senakw and Granville Island to at least Olympic Village Station and potentially Main Street-Science World Station, although it could potentially continue into the downtown peninsula as well.

There would also be a new pedestrian and cycling bridge across Alder Bay between the False Creek South seawall and the southeast corner of Granville Island, which would increase foot traffic on the eastern side of the attraction. 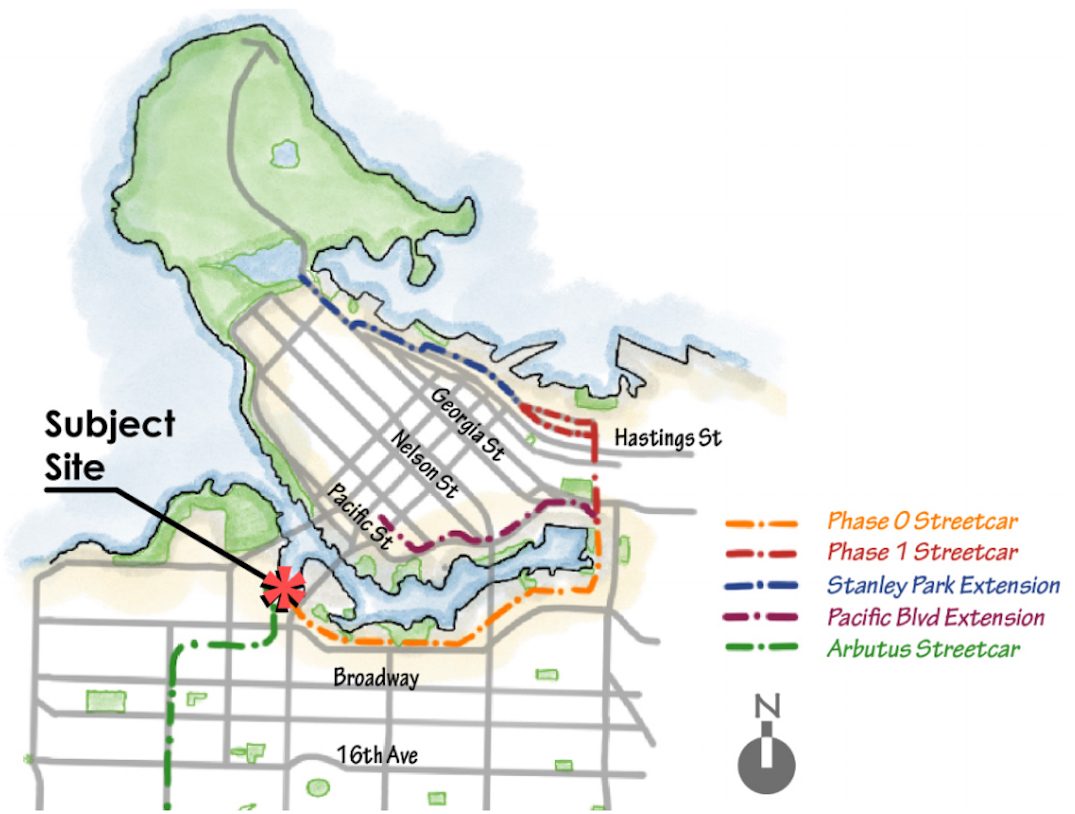 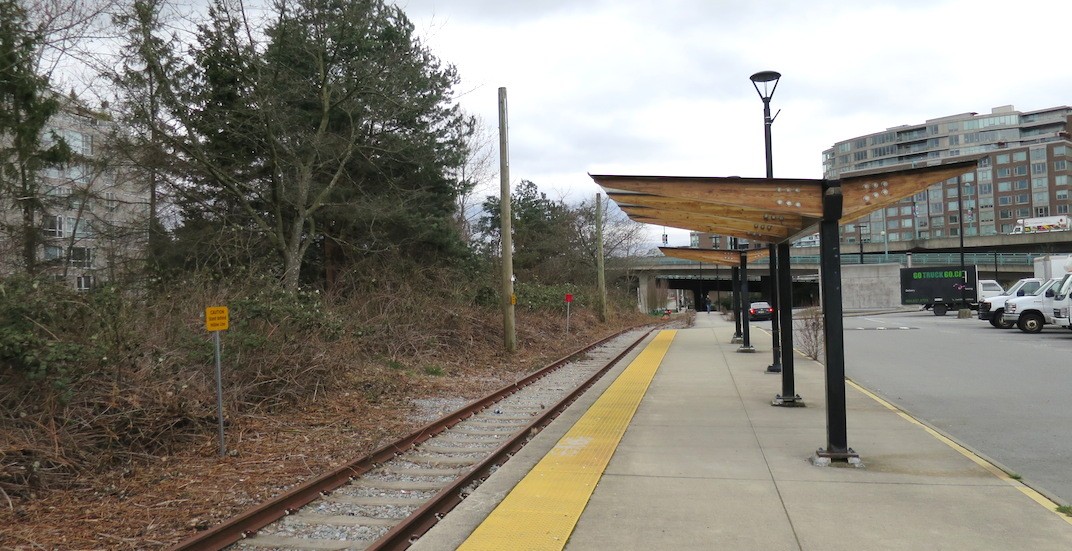 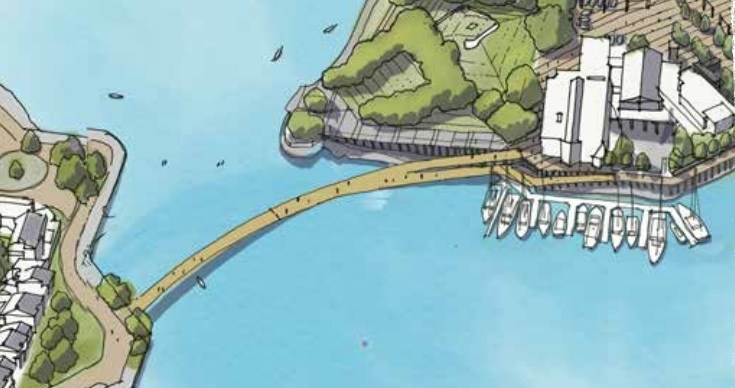 Conceptual artistic rendering of the new Alder Bay bridge for pedestrians and cyclists on the east end of Granville Island. (CMHC) 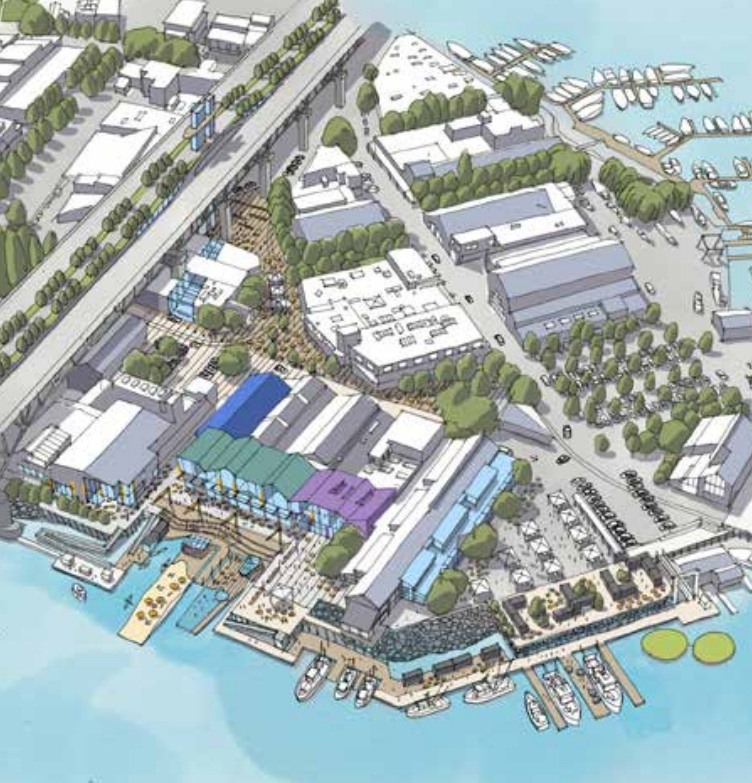 Possible location options for the elevator and staircase tower between Granville Island and the Granville Bridge deck. (City of Vancouver)

Additionally, an elevator and staircase tower is envisioned from the core of Granville Island — near the Public Market — to reach the City of Vancouver’s new pedestrian and cycling pathway on the Granville Street Bridge. A bus stop would be placed on the bridge deck, next to the tower, to provide passengers on the bridge’s north-south bus routes with a more convenient way to access Granville Island below.

While the streetcar and elevator/staircase tower were included in Granville Island’s pitch to TransLink for the Transport 2050 plan, they were ultimately not included in the final 30-year regional transportation strategy. 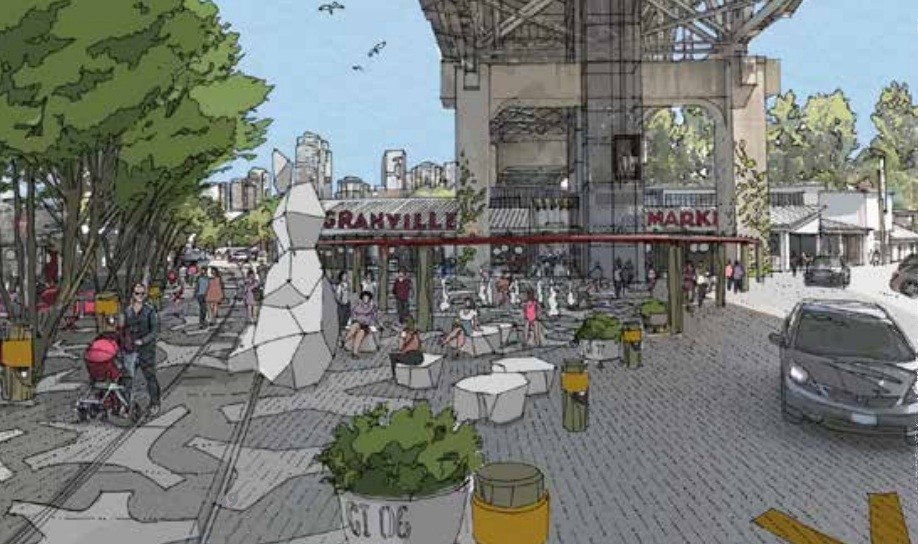 Conceptual artistic rendering of a large central plaza near the Public Market on Granville Island. (CMHC)

To date, Granville Island’s implementation of access improvements from its long-term vision has largely been limited to developing a parking management strategy, which began in 2019 with the start of pay parking during some periods of the day.

When there is a reduced need for on-island parking, the vision calls for creating a large central plaza in the core of the island, replacing parking facilities, and reallocating surface parking on the west and east ends of the island with pedestrian-oriented public spaces. There would also be improved access to waterfront areas.

Over the next few decades, Granville Island’s businesses and arts and cultural attractions will benefit from significant increases in the area’s population. Just to the west, the Senakw redevelopment will create homes for as many as 9,000 people by the early 2030s. And the overall Broadway Plan — which does not include Senakw — is targeted to add 50,000 residents and 40,000 jobs over the next 30 years.