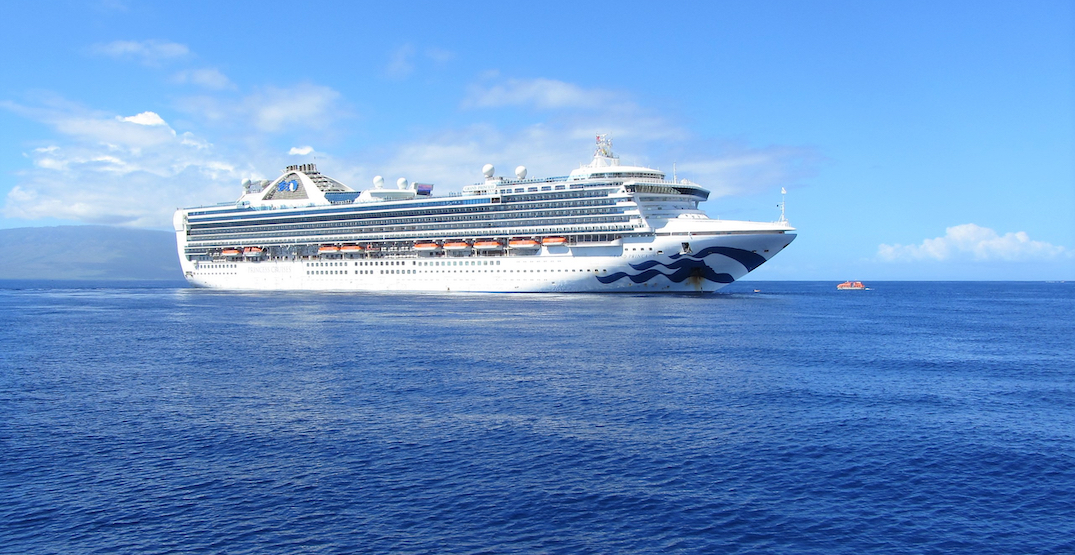 As of today, the coronavirus-stricken Grand Princess cruise ship is still scheduled to be the inaugural sailing of Vancouver’s 2020 cruise season.

Industry and port itineraries show Princess Cruise Line’s Grand Princess is set to arrive at the Canada Place cruise ship terminal in downtown Vancouver at 8 am on April 2 and depart at 10 pm on the same day, as a stopover during a West Coast round-trip sailing from San Francisco. It will arrive in Victoria the next day at 7 am.

The situation onboard the Grand Princess continues to evolve, with the ship finally docking in Oakland today after being forced to remain at sea for days off the coast of California.

At least 21 people onboard have tested positive for COVID-19, including 19 crew members.

It will take several days for the vessel to disembark; the vessel is carrying 2,421 passengers and 1,113 crew members, with American passengers transferred to screening, quarantine, and treatment facilities on land.

The Government of Canada has chartered a plane to repatriate 237 Canadian passengers. The operation of bringing these citizens home involves flying them to Canadian Forces Base in Trenton, Ontario, where they will undergo a 14-day quarantine before being allowed to return home.

A number of disembarked passengers of varying nationalities from previous sailings on the Grand Princess have also tested positive for the illness, including two BC residents in their 60s who were aboard the vessel for a sailing that ended February 21. An elderly Californian passenger with underlying conditions from the same sailing died last week after contracting the coronavirus.

“It’s just an environment where people cannot separate sufficiently from each other to prevent transmission… and with the ongoing outbreak that we’re having around the world right now, there’s really no way to effectively screen people out of cruise ships,” said BC provincial health officer Bonnie Henry, adding that going on a cruise “is really taking a chance on your health at the moment.”

The Grand Princess is supposed to call Vancouver its homeport this summer, starting on May 9, when it begins the first of a dozen seven-day and 14-day excursions to Alaska. Its last sailing from Vancouver this season is on October 17, when it begins a repositioning sailing to San Francisco and Los Angeles.

“We are in discussions with our cruise line partners to understand any changes in passenger numbers, changes to itineraries and updated protocols and procedures in place in preparation for the upcoming cruise season,” said Port of Vancouver spokesperson Danielle Jang in a statement to Daily Hive.

Given the trajectory of the global crisis, it is certain that cruise passenger numbers at Canada Place will fall significantly this season, but the Port was unable to provide a passenger traffic forecast at this time.

Canada Place experienced consecutive record cruise passenger traffic volumes in recent years, with the 2019 cruise season seeing approximately 1.1 million passengers on 290 ship calls across 41 ships. The impact is expected to trickle down to Vancouver’s tourism and hotel industry, which sees a substantial portion of its peak tourist season business from the influx of cruise ship passengers.

There have been industry reports of mounting cancellations from booked passengers and half-empty ships. Cancellations amongst Canadian passengers are expected to accelerate, after the federal government today advised against all travel on cruise ships until further notice.

“There are a number of different agencies who play a role and are involved in these discussions, including Canada Border Services Agency, Transport Canada and Health Canada, Cruise Lines International Association, and others,” continued Jang.

“Health Canada is the lead organization that all agencies will be looking to for guidance and direction, which we expect to be informed of soon.”

Within BC, there are currently 32 cases of COVID-19, including five new cases announced today. One infected resident of the outbreak at Lynn Valley Care Centre in North Vancouver has passed away.