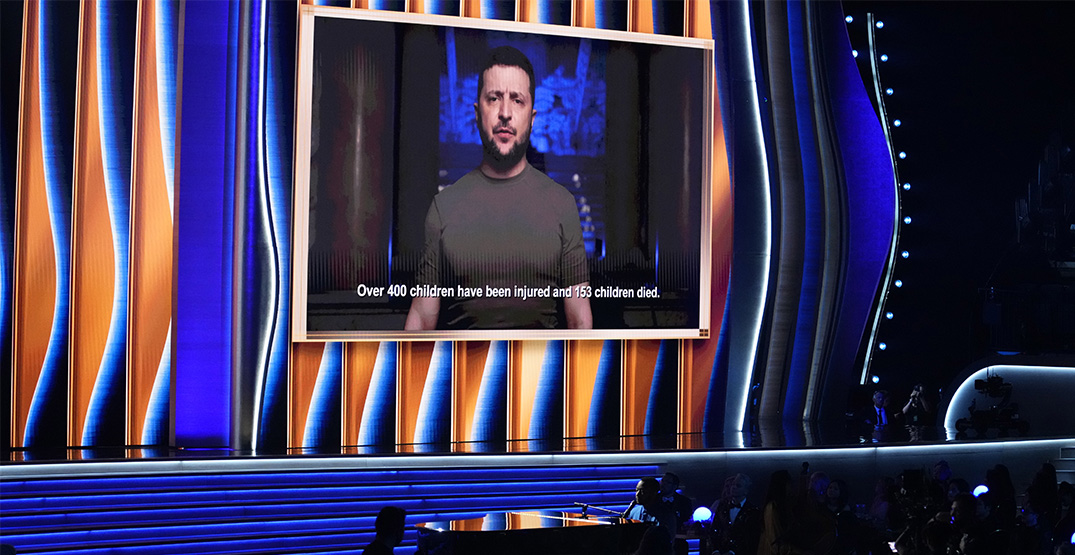 In a pre-recorded video address, the president asked for support from the room filled with North America’s most celebrated musicians and performers like Justin Bieber, Olivia Rodrigo, BTS and Doja Cat.

He painted a vivid picture for the artists, putting them in the shoes of musicians living through Russia’s war on Ukraine.

“Our musicians wear body armour instead of tuxedo,” said Zelenskyy at the 64th Grammy Awards. “They sing to the wounded in hospitals, even to those who can’t hear them, but the music will break through anyway.”

Here is Ukrainian President Volodymyr Zelenskyy’s pre-taped speech at the #Grammys, introducing a performance for Ukraine from John Legend: “Our musicians wear body armor instead of tuxedos. They sing to the wounded in hospitals.” https://t.co/rjX2S54hkr pic.twitter.com/43fcZTrjQK

According to Variety, the president filmed the video message within 48 hours before the awards in a bunker in Kyiv. He continued the address, urging the audience to support Ukraine loudly by sharing “the truth about the war” on social media and TV.

“The world doesn’t let us choose who survives and who stays in internal silence,” said Zelenskyy. “We are fighting Russia, which brings horrible silence with its bombs. The dead silence. Fill the silence with your music! Fill it today to tell our story.”

He closed out the message listing some of the cities that have been destroyed by the war — Chernihiv, Kharkiv, Volnovakha, and Mariupol — calling them “legends already.”

“But I have a dream of them living and free — free like you on the Grammy stage,” said the president.

The speech was followed by a performance by John Legend and Ukrainian musicians Siuzanna Iglidan and Mika Newton, and poet Lyuba Yakimchuk. They performed Legend’s song “Free,” which was accompanied by images from the war shown on screens.

The Recording Academy also partnered with Global Citizen on a social media campaign raising funds for refugee relief in Ukraine.