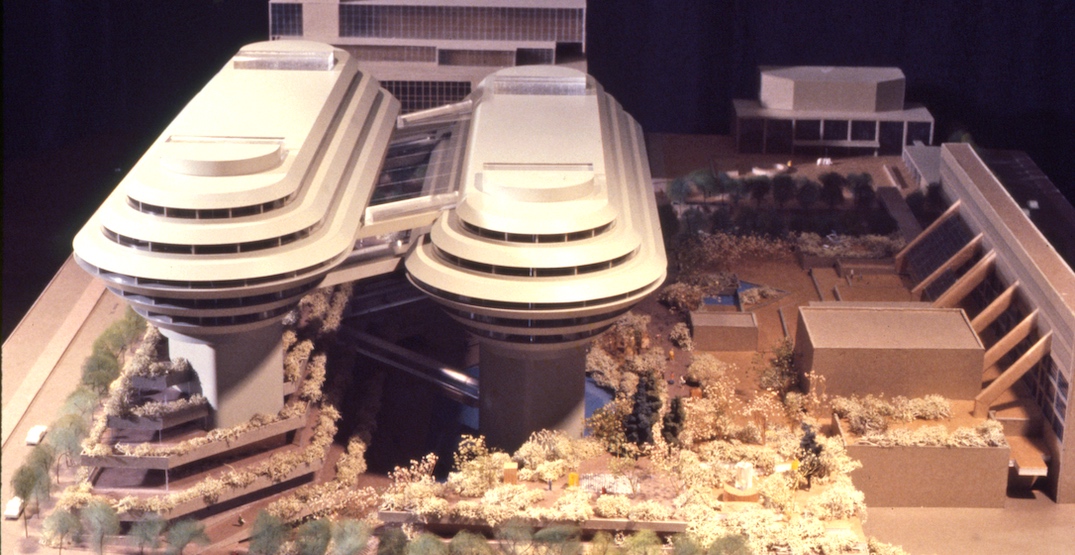 More than a decade after Arthur Erickson’s passing, his namesake foundation and family are looking to build on his storied legacy by bringing to light some of his never-built designs.

This week, the public is invited to learn more about Erickson’s never-built designs by attending Unbuilt Erickson, a free video presentation highlighting his unbuilt designs in his hometown and around the world. This multi-media show, organized by the Erickson Family Collection, runs from 8 am to 4 pm in the Great Hall of the Law Courts at 800 Smithe Street from July 4 to 7, 2022.

One of Erickson’s most significant unbuilt designs was his concept for a major Government of Canada office complex in downtown Vancouver that was far from being a conventional tower design.

She worked for Erickson between 1974 and 1984, and was a project architect for the firm’s work on designing both the Government of Canada complex and the BC provincial government’s Law Courts and Robson Square complex.

The selected Government of Canada complex location, she says, was strategically near Queen Elizabeth Theatre, the Canada Post complex, and the CBC Regional Broadcast Centre — which had been completed just two years earlier — to further establish a strong precinct of cultural and federal institutions.

The federal government assumed the design requirement of 500,000 sq ft of office space would be a typical tall box tower, but Erickson had a completely different idea in mind.

Just like the BC Law Courts, he placed the Government of Canada office tower on its side, and there would be a massive public space component.

The concept was to build four big legs, with each pair of legs supporting one of the two oval-shaped “spaceship” office volumes. She says the firm internally referred these as “spaceships passing in the night.” 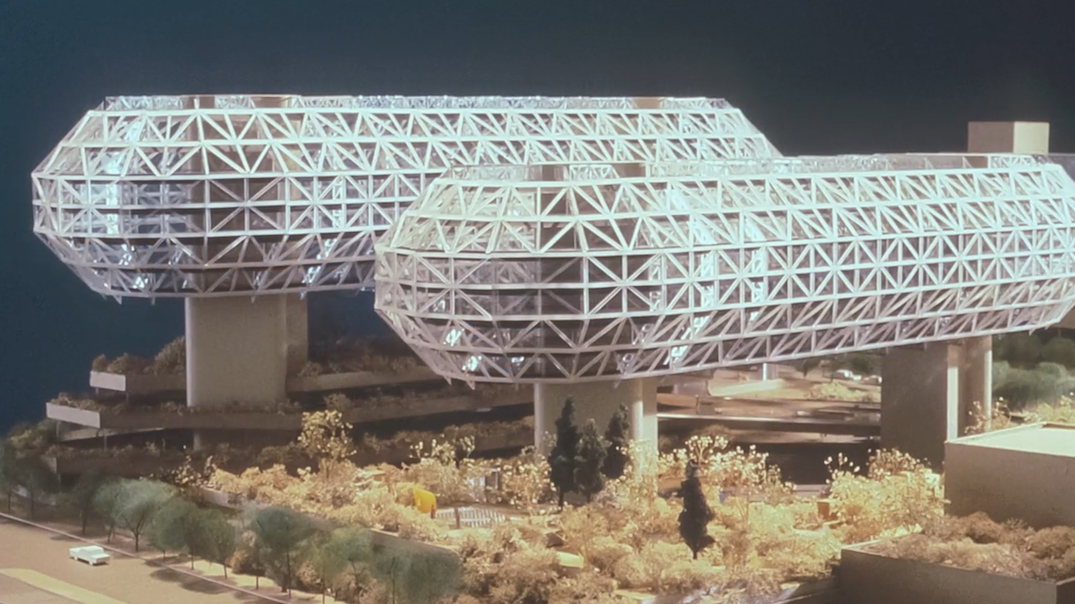 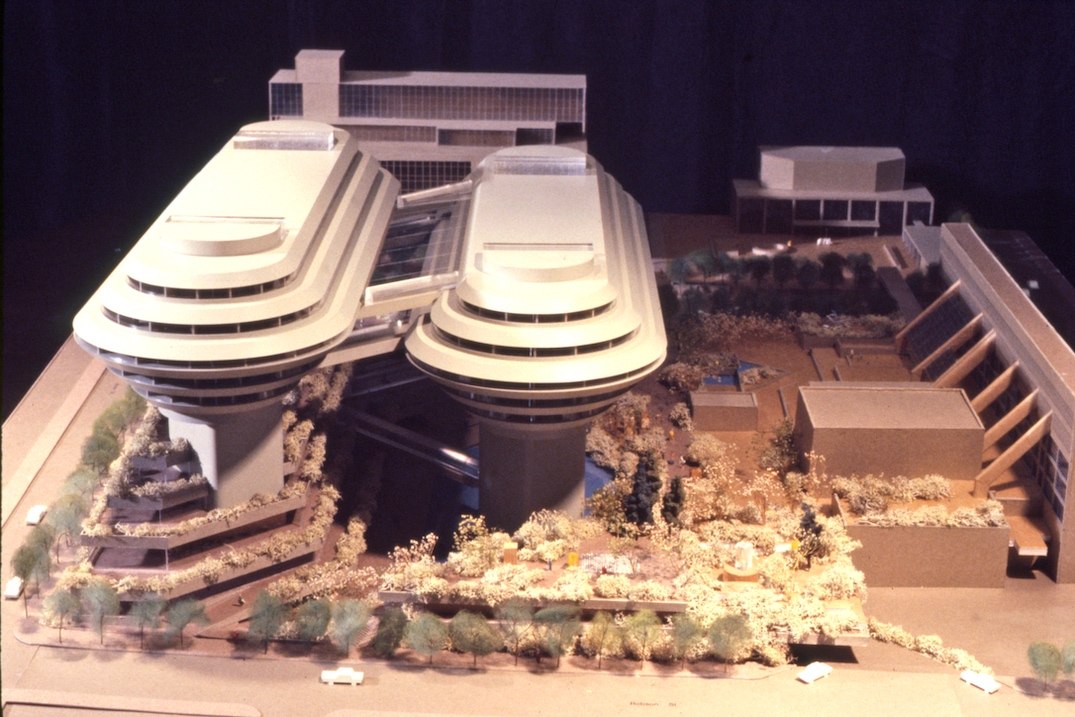 The blimp-like spaceships had rounded ends with steel trusses on the exterior. Each spaceship containing the office space was six storeys high, and 10 storeys above ground level. Both spaceships are linked together by overhead enclosed foot bridges.

“That was the idea that the federal government would have a unique presence,” she said.

Down below at ground level, there would be public park and plaza space across the entire site, along with a children’s museum, information centre, and an exhibition hall — all contained within a terraced structure with landscaping under the west spaceship on the Homer Street side of the block.

The segment of Hamilton Street between Robson and West Georgia streets would also be closed an extension of the public spaces, creating a continuous public realm concept between the area under the east spaceship and the CBC complex.

While Erickson’s concept was never realized, the City of Vancouver’s Library Square concept — designed by Moshe Safdie — that was ultimately built would include a 21-storey tower with its 270,000 sq ft of office space dedicated to the federal government. 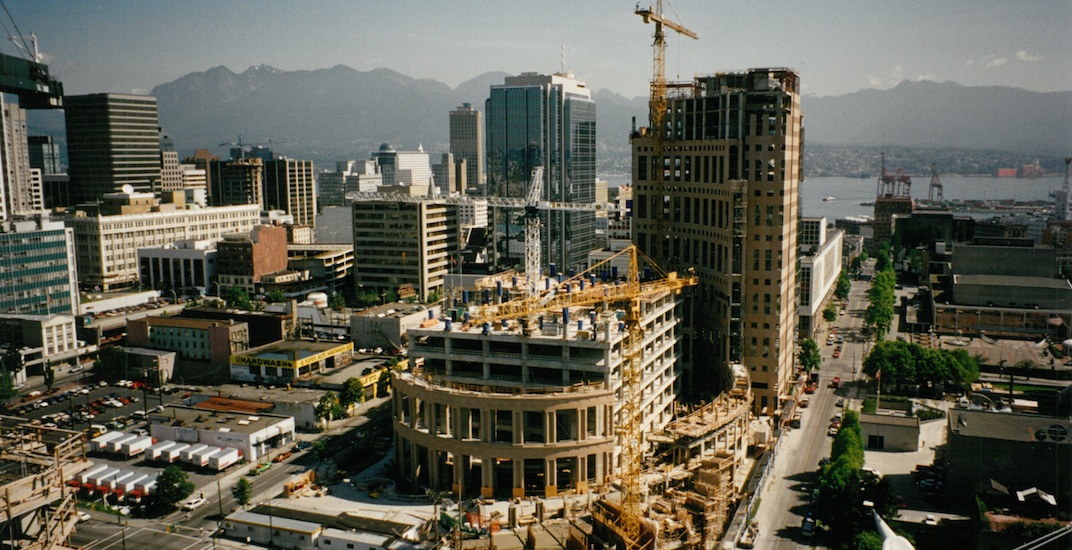 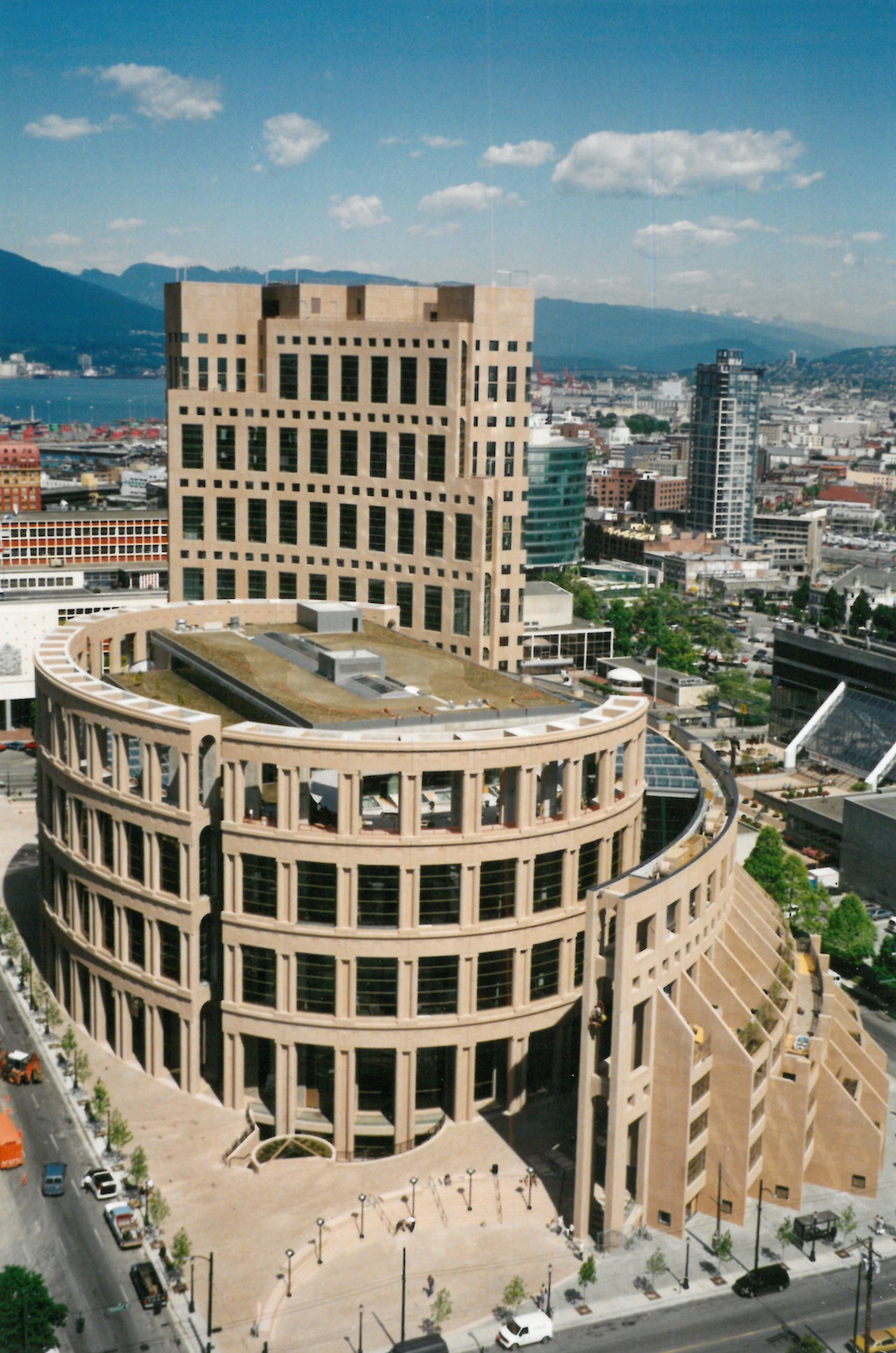 In the 2000s, Bing Thom, who worked for Erickson between 1972 and 1981, created an arts complex concept that clearly carried flairs of inspiration of the unsuccessful Government of Canada complex. The arts complex site was eyed just kitty corner from Library Square — hovering above the Queen Elizabeth Theatre plaza and the entire Larwill parking lot.

Thom’s idea was to place the Vancouver Art Gallery (VAG), a new concert hall for the Vancouver Symphony Orchestra, a National Gallery of Aboriginal Art, and an Asian art centre within a massive suspended volume that would be supported by columns.

But according to the Vancouver Sun, the leadership of the Vancouver Art Gallery at the time wanted their own new standalone home, despite the federal government’s real interest then in contributing $500 million towards building a landmark project in time for the 2010 Olympics. Thom suddenly passed away in 2016.

The VAG’s plan to build itself a standalone complex at the city-owned Larwill block is now showing real momentum. Last week, the federal government announced a funding contribution of $29.3 million towards the project’s Passive House green building design, which brings the VAG’s raised total to about $270 million. The project is expected to carry a total cost of $400 million, with construction potentially beginning later this year for a completion in 2027.

Not entirely dissimilar to Erickson’s Government of Canada complex and Thom’s arts complex designs, the new VAG building concept by Herzog & de Meuron and Perkins & Will is also a structure supported by pillars to create a significant public plaza beneath the new art gallery space.

By the end of this decade, the federal government is aiming to build a significant office space expansion for its Sinclair Centre complex, which would centralize some of the federal offices and services found in the city. Construction on an office tower addition to increase the complex’s floor area to up to one million sq ft could begin in 2024. 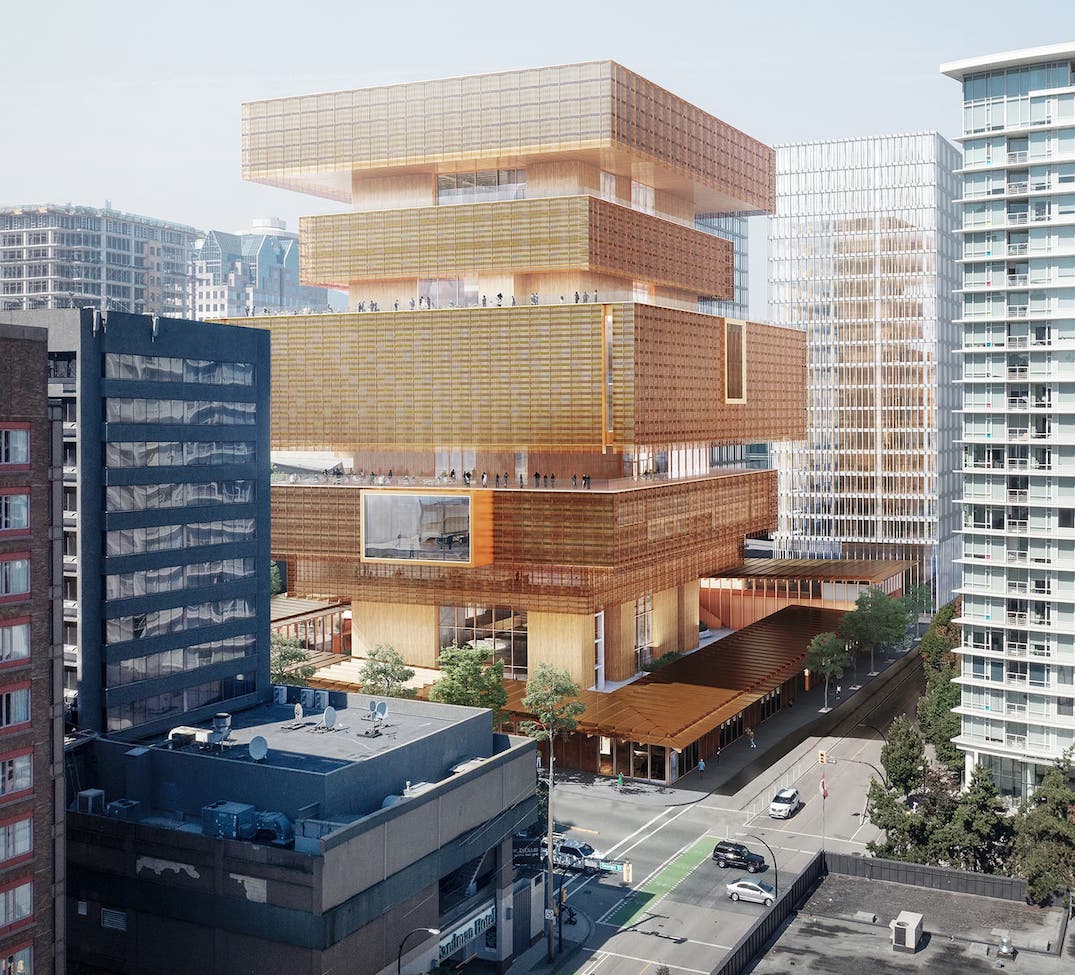