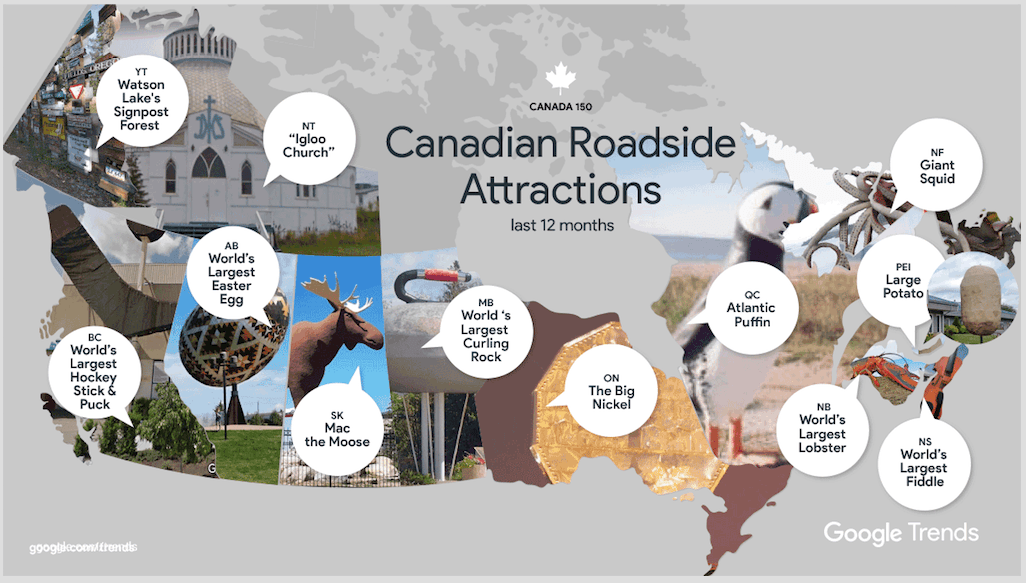 And as the celebrations continue Google Canada looked at some of the giant roadside attractions that our country has to offer.

Being such a huge country, we seem to like our attractions to be extra large in size. These big attractions are part of our heritage and culture, and are must sees along the way on any Canadian road trip.

So what’s Canada got in terms of roadside attractions? Anything from a giant lobster to a massive curling rock, and everything in between.

Google Canada took at a look at some of the giant roadside attractions our nation has to offer via Street View. Go big or go home for Canada’s 150th!

This 205-foot hockey stick built at the Cowichan Community Centre on Vancouver Island is made from Douglas Fir wooden beams. The world’s largest hockey stick and puck is reinforced with steel and weighs in at a staggering 61,000 pounds.

One of the top tourist attractions on the Trans Canada Yellowhead Highway, the world’s largest Easter egg or Ukrainian ‘Pysanka,’ was constructed in 1975 in honour of the early Ukrainian settlements east of Edmonton. This colourful marvel contains 524 star patterns, 3,512 facets, 2,206 equilateral triangles, 6,978 nuts and bolts, and 177 internal struts.

At 32 feet (9.8 m) tall and a weight of 10 tons, Mac the Moose is reportedly the largest moose on Earth. Saskatoon artist Don Foulds created Mac as the official representative of Moose Jaw, watching over the Trans-Canada Highway in all his glory. Mac’s body is constructed from a heavy metal pipe framework. Thinner pipes and metal strips prop up the frame and the body is covered with metal mesh. The base that holds him is covered with three coats of cement. Mac was completed in May 1984. He is named after the late Alderman Les McKenzie, a well-known citizen of Moose Jaw.

The Sign Post Forest is Watson Lake’s most famous attraction. Travellers from around the world have been bringing signposts from their hometowns to the Sign Post Forest since 1942, when U.S. soldier Carl K. Lindley spent time in Watson Lake recovering from an injury. Today, there are over 77,000 signs in the forest, and the number grows each year as visitors contribute signs and continue the tradition.

Possibly the North’s most iconic, most photographed structure, the Our Lady of Victory church in downtown Inuvik is a bleach-white cylinder capped by a silvery dome, imitating the Inuvialuit snow-houses of old. The inside features paintings by local artist Mona Thrasher.

At nine metres tall, Sudbury Ontario’s Big Nickel is the largest coin in the world weighing close to 13,000 kilograms (about 64,607,747 times the size of a real Canadian nickel). Built in 1964, the twelve-sided monument is located at the Dynamic Earth science centre, on a small hill overlooking the town.

Arborg, Manitoba is home to the world’s largest curling rock. Located just outside the Arborg-Bifrost Curling Club, the rock measures 4.2 m (13.78 feet) across and 2.1 m (6 ft 10.68 in) tall. This 1.5 tonne curling rock is made of steel, foam and fibreglass and sits atop steel support beams.

Icon of the Montreal landscape, this reservoir of water in the form of a bottle of milk, was built in 1930 by the dairy Guaranteed Pure Milk. Approximately ten meters high and made of riveted steel, this giant tank can hold nearly 250,000 liters. A legendary symbol of the agri-food industry in the heart of the city, Héritage Montréal launched Operation Sauvons la Pinte in 2009, which resulted in the complete restoration of the pint and its original inscription.

In 1878, fishermen near Glovers Harbour, N.L. caught themselves a whopper. They landed a giant squid that was 16.7 metres (55 feet) long, and was recognized by the Guinness Book of Records as the biggest squid in the world. In 2001, to mark the occasion and increase tourism to the tiny Newfoundland hamlet, a replica was commissioned and built near the site of the squid’s capture.

Located at The Prince Edward Island Potato Museum in O’Leary and surrounded by fertile potato growing fields, this giant potato sculpture guards the entrance to the museum. Made of fibreglass and standing 4.3 metres high and 2.1 metres in diameter, this spectacular spud has mashed its way into many a tourists’ snapshot.

Shediac, New Brunswick is recognized internationally as “The Lobster Capital of the World” for its lobster fishing industry. For that reason, in 1989 the Shediac Rotary Club thought it fitting to erect a monument in tribute of the delectable crustacean and promote its role in the development of the community. The late Winston Bronnum from Penobquis, New Brunswick, was commissioned to create this magnificent showpiece which stands at 11 m (35 ft.) in length, 5 m (16 ft.) in width and 5 m (16 ft.) in height, weighing 90 tonnes.

So, what’s your next Canadian roadside destination? 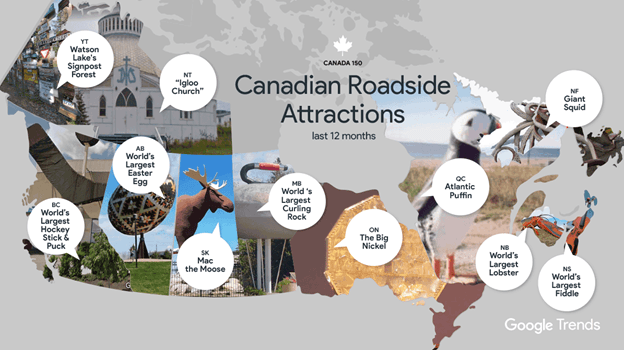