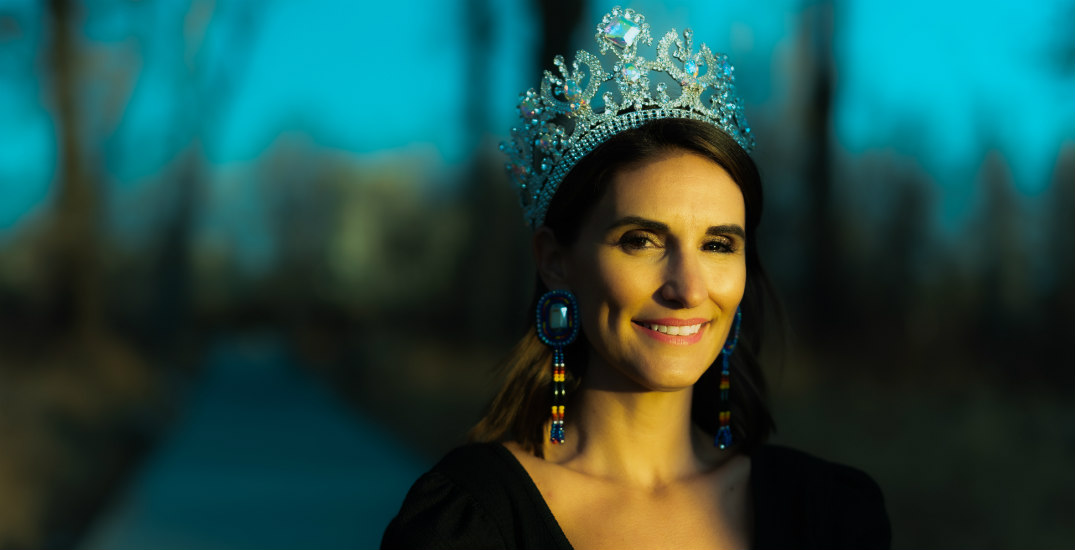 Written for Daily Hive by Brandi Morin, an award-winning Cree/Mohawk/French journalist based in Alberta.

In November 2020, Lorelei Higgins, 40, travelled from her home in Calgary, Alberta to Las Vegas, Nevada to compete in the Mrs. Globe Canada pageant. Her goal was to utilize the platform of an international stage to grow her vision of peace building, elevate women’s voices and showcase her culture as a Métis woman. But shock, then elation hit her when she won the title of Mrs. Canada Globe, she told the Daily Hive in late May.

“I barely had words. I was funneling. My crown was crooked,” she laughs while describing her crowning moment.

But behind this climactic scene the reminder of Lorelei’s arduous journey uncovering her identity and Métis culture strengthened her drive to inspire others to come into their own.

She didn’t meet her biological father until her early twenties, but says she always had an inkling she was Indigenous.

“I always knew I was Indigenous in my heart, but it was something we never talked about in my family.”

After working up the “courage” to ask her mother about her biological father one day, Lorelei was met with a door slammed in her face. She had just returned from an internship with the Canadian Department of Foreign Affairs and International Trade, Ghost River Rediscovery in Bolivia, working closely with Indigenous community members there. The project focused around leadership, Indigenous human rights and cultural rediscovery. More and more she felt the nudge to discover her own heritage.

Meanwhile, Lorelei was building relationships with local Métis elders and participated in ceremonies like sweat lodges. The elders, she says, embraced her as one of their own. One elder gave her a Métis sash and said, “Welcome to the family. She said, ‘Lorelei, you’re Métis, and she also said ‘I suspect you’re Ojibwe, but I’m not sure about the rest’. But by this point we had no confirmation that I was Métis.”

A few weeks later her mother called her from Winnipeg.

“She goes, ‘I’m sitting here with your dad. Would you like to talk to him?’’ Her mother had tracked down Lorelei’s father and the two formed an instant bond.

Not long after Lorelei went to Winnipeg to meet him. He waited at the airport with a bouquet of roses. She remembers it being “so obvious” she was his daughter; they had the same bone structure and eyes. 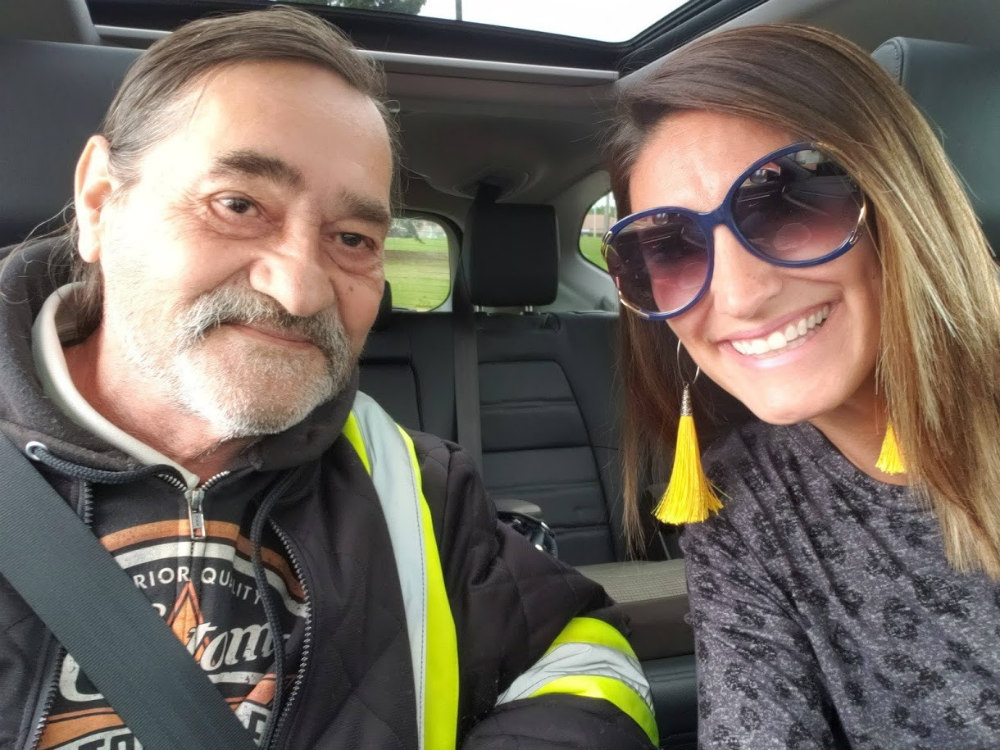 During a dinner conversation later, Lorelei says her father leaned in to let her know he had something to tell her that “might change her perception of us.”

Her father was initially shocked by her excitement. He had suppressed his Indigenous identity of being Cree and Ojibwe for most of his life at the direction of his mother who was threatened by racism, discrimination and feared her children would be taken by child welfare authorities.

“So, he grew up with the idea that at any point he could be taken away…my grandmother would say things like, never tell anyone, because they’ll take you away from me.”

Since then, the generational stigmas that plagued her father’s Red River Métis family are fading, adds Lorelei.

“I feel like it’s finally healing-like one of the most important things I do is to bring truth and courage to talk about it.”

Before she decided to vie for the Mrs. Canada Globe title, she consulted her elders who encouraged her to go for it.

“They said, ‘Lorelei, you can talk about Murdered and Missing Indigenous Women and Girls. You can talk about the 60s scoop. You can talk about residential schools. I mean, think about all the things you can do with this platform and for the good.’ And then they said, like, ‘we would just have a couple of stipulations, like wear your Métis sash, whenever you can and speak your language.’” 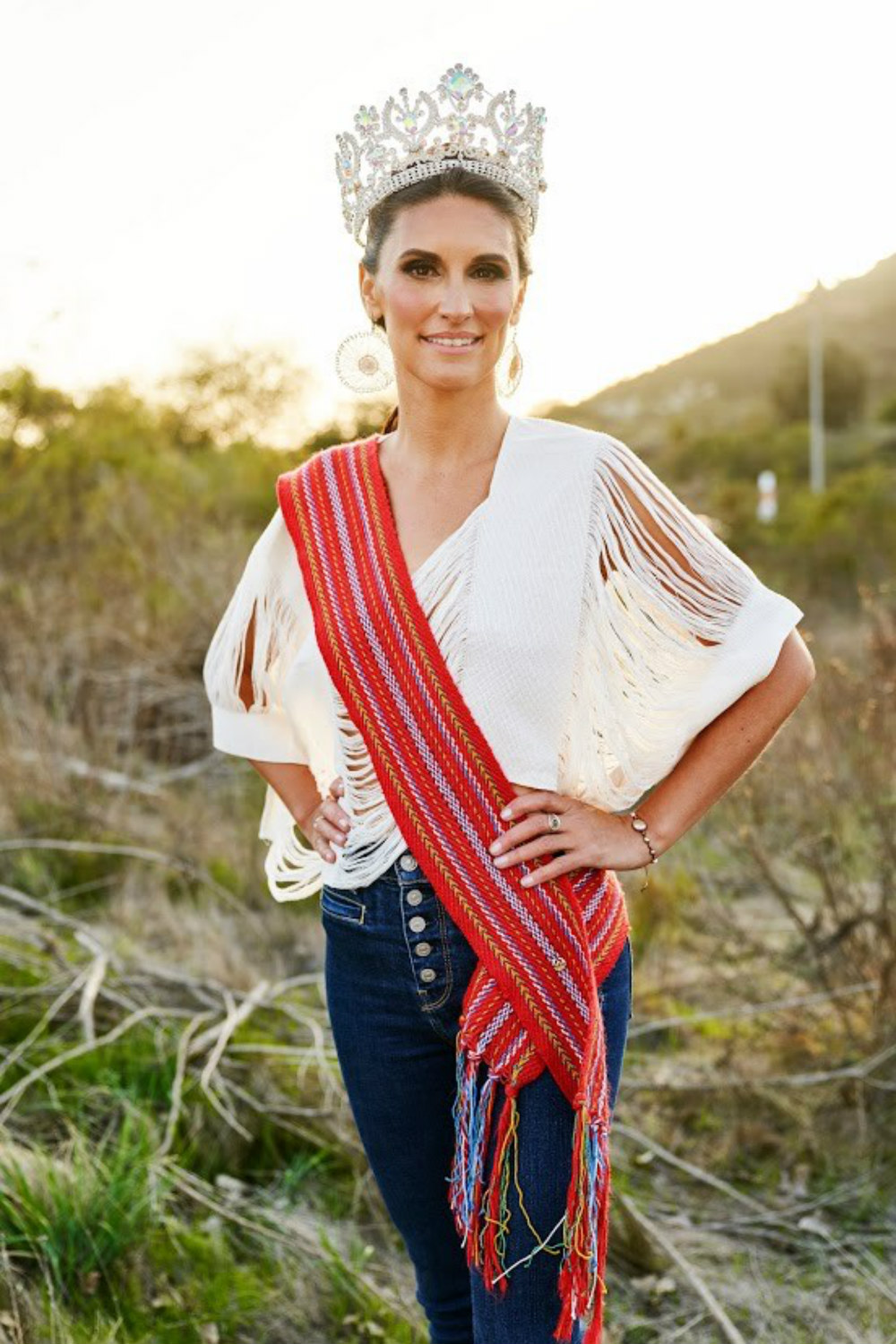 When not meeting with international organizations like the United Nations or promoting world peace in her new role, Lorelei is a wife and mother of two young children.

She also works with the City of Calgary helping to establish an Indigenous Relations office.

“The Indigenous Relations office is a hundred percent peacebuilding. It’s good relations. And figuring out how do you actually have good relationships? And that is the core of building. Of honouring the Treaties.”

Ultimately, she is proud to freely showcase her Indigenous identity to the world, passionate about supporting women, and practicing leadership through peace building.

Her advice to others who are struggling with identity or purpose is to “not live in fear.”

“Don’t be afraid to ask hard questions. And don’t do it alone! Find other women who are somewhere on this journey. Ones that can support you, mentor, listen to you, aren’t competing with you but there to truly support you as female energy. There’s no formula-don’t let the world tell you what you should be.”

Both her parents are thrilled with her accomplishments, she adds. Her mother carries around laminated cards to share with people that her daughter is Mrs. Canada Globe.

“My mom, she’s always telling people. I think out of everyone, my mom has really surprised me. And she tells me, ‘I’m so proud of you and it takes courage’.”