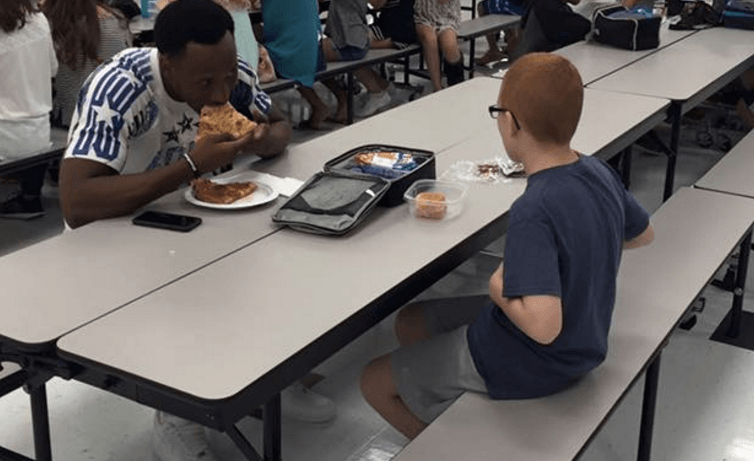 1. Entire class gets A on chemistry test thanks to winning shot

Chemistry professor Dr. Christopher Callem promised his entire class an A on their upcoming test if a student could land a faraway shot into a trash can at the front of the lecture hall. Vinney Forte took Callem up on the offer and scored this impossible shot. The class went wild and they all ended up with As thanks to Forte’s Steph Curry-like skills.

A very tiny puppy is safe after firefighters rescued it from a house fire. Firefighters were called to the scene at a Fort Lauderdale home and did a search. They found the puppy at the back of a room and safely got him out of the burning room. The puppy is doing well and is expected to fully recover.

Ross Kelly is a sixth-grader in Australia who recently won a humanity award for simply being a good friend. Kelly learned sign language to communicate with his pal Isam Gurung, who transferred from a school for the hearing impaired. At first, the friends passed notes to communicate with each other, but eventually Kelly decided to learn Auslan (Australian sign language) so he could he could translate for Gurung.

Dashcam footage shot in Austin, Texas caught a kindhearted motorist stopping on the freeway to save a kitten stuck on the road.

5. Teen and grandfather go to college together

It’s NEVER too late to learn, even for her grandpa. #YouBelong https://t.co/grYFf9ic8a

Eighteen-year-old Melanie Salazar will be starting university with her 82-year-old best friend. That is because Salazar and her grandfather Rene Neira will be taking classes together. Neira has been enrolled in economics at Palo Alto College in San Antonio for several years and this semester he will be receiving his associate’s degree.

“It really inspires me and keeps me determined,” said Salazar. “I want to be like my grandpa and be determined to find what I love and get a degree.”

Alabama’s Birmingham Police Department is going above and beyond to help citizens. Three Birmingham police officers were on patrol when they spotted an elderly woman struggling to mow her front lawn. Officers Erik Henderson, Robert Lewis, and Ivy Nicole Jackson decided to help the woman out by cutting her grass for her. “A lot of people don’t like us but we’re here to help,” Henderson said.

Rescue workers were able to save a dog trapped under the rubble from Italy’s 6.2 magnitude earthquake. The rescuers heard barking coming from the wreckage of a destroyed home. Romeo the golden retriever was freed after being stuck for nine days. His owners cheered with joy after they were reunited with their beloved pet.

8. Football player joins boy with autism for lunch after seeing him sit alone

The Florida State University football team was paying a visit to a local middle school last week when a player named Travis Rudolph noticed a boy sitting alone at the cafeteria lunch table. Rudolph decided to join the boy whose name is Bo. What Rudolph didn’t know is that Bo is autistic and usually sits alone at lunch.

Rudolph says he did not even know Bo had autism and just wanted to keep him company. “It’s just heartbreaking that he’s in that situation, but I’m praying for him. He’s a great kid overall. I would love to hang out with him anytime,” he said.

A photo of Rudolph and Bo sitting together has been shared thousands of times on social media. According to Bo’s mother Leah Paske, he no longer sits alone at lunch.

9. Puppy pretends not to be guilty

This little guy is too cute to get mad at.