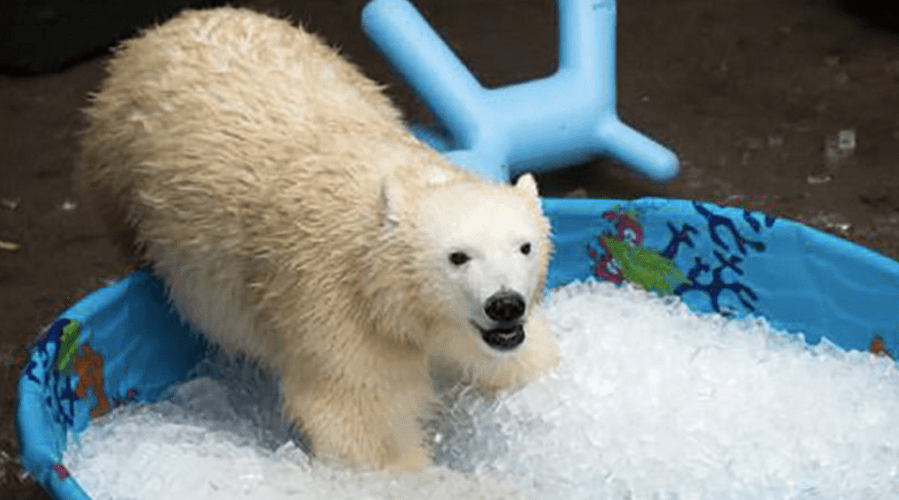 A baby humpback whale came to the rescue after its mother got stranded on a sandbank in North Stradbroke Island, Australia.

The calf swam to action, trying to push the mother back into the ocean. After 40 minutes, the mother whale was able to free herself with help from her baby.

Five-year-old Lylah is training to be the next American Ninja Warrior. For those unfamiliar with the show, it is an obstacle course competition where contestants must battle through extreme challenges that test their physical strength. Lylah’s dad, Gavin MacCall is a fan of the show and decided to build an American Ninja Warrior-inspired course for his daughter. Turns out Lylah is actually a pro and is a Ninja Warrior in the making.

3. Texas man uses Twitter to save brother and dog from North Carolina flood

Chris Williams was trapped in his North Carolina home with his dog with no way to escape. The flooding for Hurricane Matthew was surrounding his home and Williams— a Navy veteran—did not know what to do. Chris’s brother Craig was thousands of miles away in Texas, worrying. Craig was on social media when he saw a drone picture of a home submerged by water in North Carolina.

He sent a screenshot of the picture to Chris, hoping to cheer him up and teased him to feel grateful that wasn’t his home in the picture. Chris did not reply cheerfully and told Craig that was his home. Craig became extremely worried and managed to contact the person who Tweeted out the drone picture. The man behind the drone is named Quavus Hart. Once Hart got that message from Craig, he stopped everything his was doing and used his drone to direct a FEMA crew to Chris’ house. The crew followed the drone’s directions and were able to get Chris and his dog safely out of the home.

4. Rescuer reunites with baby he saved from bombed house

Rescuer’s emotional reunion with baby he pulled from rubble of bombed house https://t.co/0beTHqRQ4y

A rescue worker who dragged a baby to safety after an explosion in Syria was reunited with the infant. Abu Kifah, 22, saved one-month-old Wahida Ma’artouk a few weeks ago when she became trapped in the rubble following an airstrike. The emotional rescue brought Kifah to tears, but he recently got to see Ma’artouk in a happy reunion. The baby girl is now safe and healthy. “I carried her in my arms again and the night of the rescue came back to me. But I did not cry again!” said Kifah, according to Metro UK.

5. Students sing to choir director before she dies of cancer

Mariana Walker got a very heartwarming send-off from her students before she passed away from cancer. Walker was the long-time choir director at Alvin Junior Hig School. She had to leave her job after being diagnosed with cancer and her illness quickly progressed. Her students loved her very much and they accepted that she was terminally ill. But the students wanted to do one last special thing for their teacher. They went to her home and managed to serenade her moments before she passed away.

Nora the baby polar bear had a blast in this kiddie pool filled with ice cubes. The staff at the Oregon Zoo captured the priceless moment and Nora has since become an internet sensation.

An elderly couple was on the Barcelona Metro last week when they broke out into a dance-off. It was adorable and the moment was caught on camera.

Family members of 87-year-old Florida grandmother Claire Olsen grew worried when they did not hear from her after Hurricane Matthew passed through the south-eastern state on Saturday. Her grandson, Eric Olson, lives in Nebraska told ABC news he did not know what to do after numerous attempts of trying to get in touch with his grandmother failed. So, Olsen got creative and decided to order his grandmother a pizza. He gave the pizza delivery person special instructions to check on his grandmother and turns out she was safe and sound. “Police and fire couldn’t do it, but Papa John’s got there in 30 minutes and put the cellphone to her ear,” Olsen told ABC News.

9.  This puppy and baby will make your day

A puppy and a baby. What else would you possibly need to make your day?