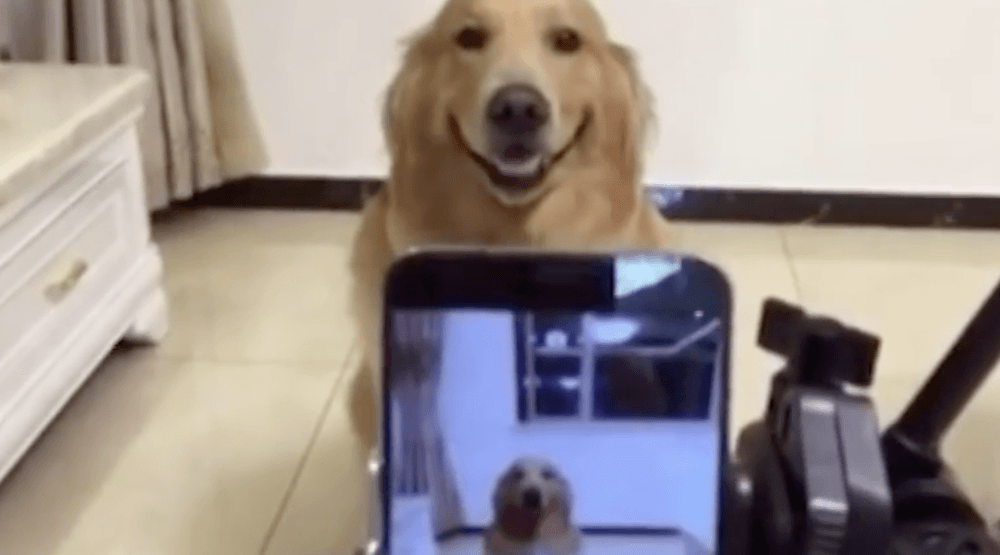 It was January in Toronto, and it was cold. When the rescuers arrived, they found a puppy tied in a bag, “discarded like garbage” behind a building. The pup also had a birth defect, and was missing his two front legs. His loving personality won over the rescuers, who named him Cupid.

It wasn’t long before Toronto company PawsAbility stepped in to help Cupid. He was fitted for new front legs, and his new life ahead of him.

Within weeks, the little puppy was healthier, playful, and doing well in the hands of a foster family.

Cupid’s new legs arrived, and he began using them. He took his first steps in what the dog rescuers are calling “training wheels”. He’s being trained for the next while to use his muscles, and he just keeps getting more and more adorable.

Pearl the rescue goat lives at an animal sanctuary in Tennessee. Every day, Pearl goes out to greet the farm’s UPS delivery man and waits for him to get out of the vehicle so she can say hello.

“The UPS man loves Pearl too, and has told us that no matter what kind of day he is having, when he sees Pearl run to greet him everything is better,” said the sanctuary on their Facebook page. Sometimes, friendship is found in the most unusual places.

3. Dog learns how to smile for the camera

This Golden Retriever has been trained to smile for the camera, and it’s pretty darn cute. Talk about talent.

4. 5th graders get a surprise when teacher proposes to fellow teacher in front of class

These fifth graders got an unexpected surprise when their science teacher proposed to their math teacher on Valentine’s Day. Jason Seifert proposed to Ally Barker in front of their elementary students in Ohio and the kids’ reaction was priceless.

Dogs at the Scottish SPCA (SSPCA) are getting some new threads. Caretakers at the SSPCA are knitting colourful sweaters for dogs with darker coats.

According to the SSPCA, dogs with darker coats are not adopted as frequently as dogs with lighter coats. In order to make the dogs more noticeable, SSPCA employees have been stitching together colourful sweaters for the darker dogs to wear so they can be noticed by potential owners.

A WestJet pilot came to the rescue with pizza after Air Canada passengers were stranded in Fredericton, New Brunswick.

The flight departed from Toronto and was headed to St. John’s, Newfoundland, but could not land due to bad weather. The passengers were stuck at the airport and asked an Air Canada employee if they could get food. They were told that it was too late and nothing was available.

Then, out of nowhere, a WestJet pilot appeared and said, “Hey … I am from WestJet and we do things differently. Who wants pizza?” In 20 minutes, all of the hungry passengers received a warm slice.

7. Puppy gets very confused when it sees reflection

This puppy was amazed when it saw its reflection in the mirror, making for a very adorable moment.

8. Dancing dads in tutus steal the show at ballet class

Teachers at the Philadelphia Dance Centre invited students to bring their parents to class this week, and some dancing dads stole the show. Dressed in tutus, these dads showed off their skills, making for a hilarious performance.

9. This might be the most Canadian highway closure photo ever taken

This is clearly another ‘Only in Canada’ moment.

On Thursday, hundreds of vehicles on the Coquihalla Highway, from the Lower Mainland to the BC Interior, became stranded when the provincial government shut down the route due to poor road conditions from heavy snowfall.

Delays on the high-elevation mountain highway lasted overnight, forcing many drivers and their passengers to sleep in their vehicles overnight.

As for the daytime, it is a different story. While many in a similar situation would opt to stay inside their cars to watch movies, karaoke, listen to music, play video games, swap stories, or even simply to stay warm, a group of men decided it would be an opportune time to play a game of road hockey.

Naturally, many of them were traveling with hockey sticks. Bonus points for wearing flannel.