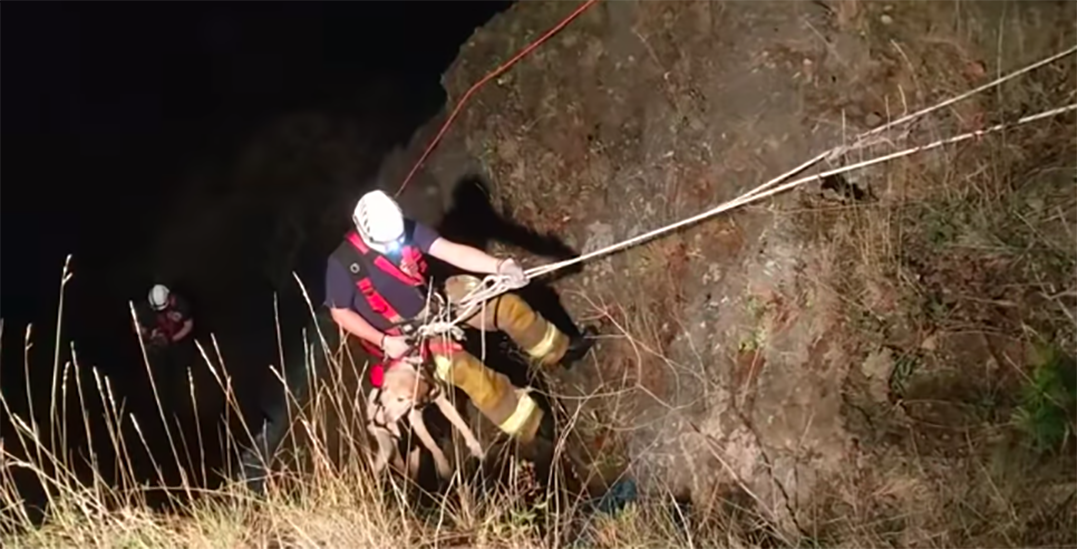 A pair of volunteer firefighters from the San Juan Island Fire Department are being praised for their rescue of a hearing and sight-impaired senior Golden Retriever.

The rescue happened on Monday on the west side of San Juan Island, just across the waters of Haro Strait from Vancouver Island. A call came in at 8:30 pm, reporting a dog that had gone off the steep bluff of a cliff.

“Fortunately, we were in the middle of training, so we had lots of people ready to go,” says Lieutenant Michael Henderson.

They found the dog 40 feet below from the cliff and were faced with a rising tide and challenging rescue conditions.

“He was all the way down at the water line,” comments Lt. Henderson. “He had tried to move and find his own way up, but he was exhausted at this point.”

The video, which was uploaded to Youtube shortly after the rescue, shows two members of the fire department using a twin tension rope system, dropped down the side of a cliff.

One crew member begins to scale up the side of the wall with the Golden Retriever, harnessed to his side.

The dog, who is hearing and sight-impaired, can be seen squirming and wailing in fear. Finally, the firefighter makes his way back up the cliff.

“We brought in a fireboat as well, we really just weren’t sure of what approach to use cause of the tide,” said Henderson. “The dog had no major injuries either, just a little banged up and tired out.”