The Canucks and Sharks played their first preseason game of the season on Monday night on Vancouver Island as part of North Saanich winning Kraft Hockeyville.

Kraft Hockeyville is a Canada-wide competition that has been going on since 2006. It shines light on small hockey mad towns across Canada, ultimately rewarding one community with $100,000 in arena upgrades and an NHL preseason game.

In order to help launch their new Gold Campaign, KD asked me to take care of the prestigious KD Golden Noodle. So I took it to Hockeyville.

The golden noodle is a one-pound, 24K gold noodle(!) that fans in Canada will have the chance to win, with the purchase of KD. Enter the pin code found on KD cheese packets online for your chance to win the golden noodle for yourself. The noodle is worth approximately $30,000 CAD. There are also over 500 other instant prizes, including anything from gold-plated KD cuff links, to sunglasses to flip-flops.

But for one night, the gold was mine, all mine.

This was a true community event, held in a rink with a capacity of approximately 2,400. It didn’t feel like I was heading to an NHL game, which was really neat. 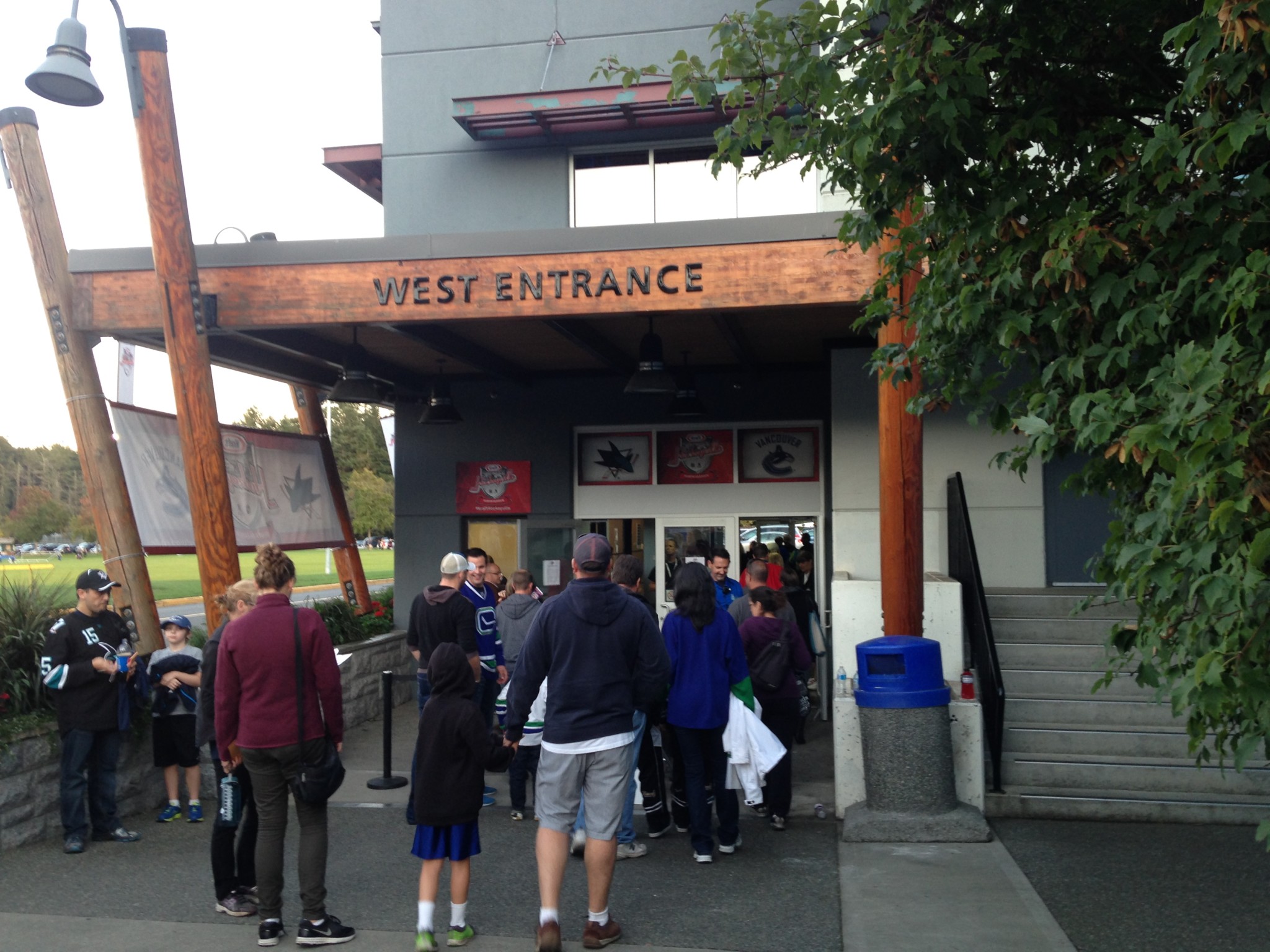 This was also the first NHL game I have ever attended where the parking was free. Can we do this every year?

Walking to the Q-Centre, I was greeted by the local Liberal candidate looking for my vote in the federal election, which was a good idea because I think all of North Saanich was at the arena on this night. When I stepped into the rink it was nice to see how excited everyone was to have NHL hockey in their community. The rink was filled with families attending the game together.

The game on the ice wasn’t exactly an instant classic. The Canucks and Sharks remained tied 0-0 for the entirety of regulation. Fans did get a thrill during the first intermission when Don Cherry and Ron MacLean took to the ice for Coach’s Corner. Cherry played to the crowd, telling everyone that local boy Jamie Benn was his favourite player.  Meanwhile, Ron MacLean told everyone that orcas are not whales like we all thought, but in fact they are dolphins (mind = blown).

The good thing to come of the 0-0 score at the end of regulation was that we would get our first look at 3-on-3 overtime (the Q-Centre will be an answer to an extremely obscure trivia question one day). In a storybook ending of sorts, local boy Adam Cracknell channeled the power of the golden noodle and scored the winner for the Canucks.

The power of the golden noodle is real.

Cracknell received the loudest ovation of any player at the beginning of the game, ahead of players like Alex Edler and Chris Tanev, when the starting lineups were announced.

Post-game, the players lined up on their respective blue lines and were handed Hockeyville jerseys to give to some local children. Jannik Hansen took initiative and led his Canucks teammates to toss the jerseys to kids in the crowd. Most of the Sharks players followed as well… And then 40 kids walked onto the ice for the jerseys they were promised. Something was lost in translation I guess. Whoops. 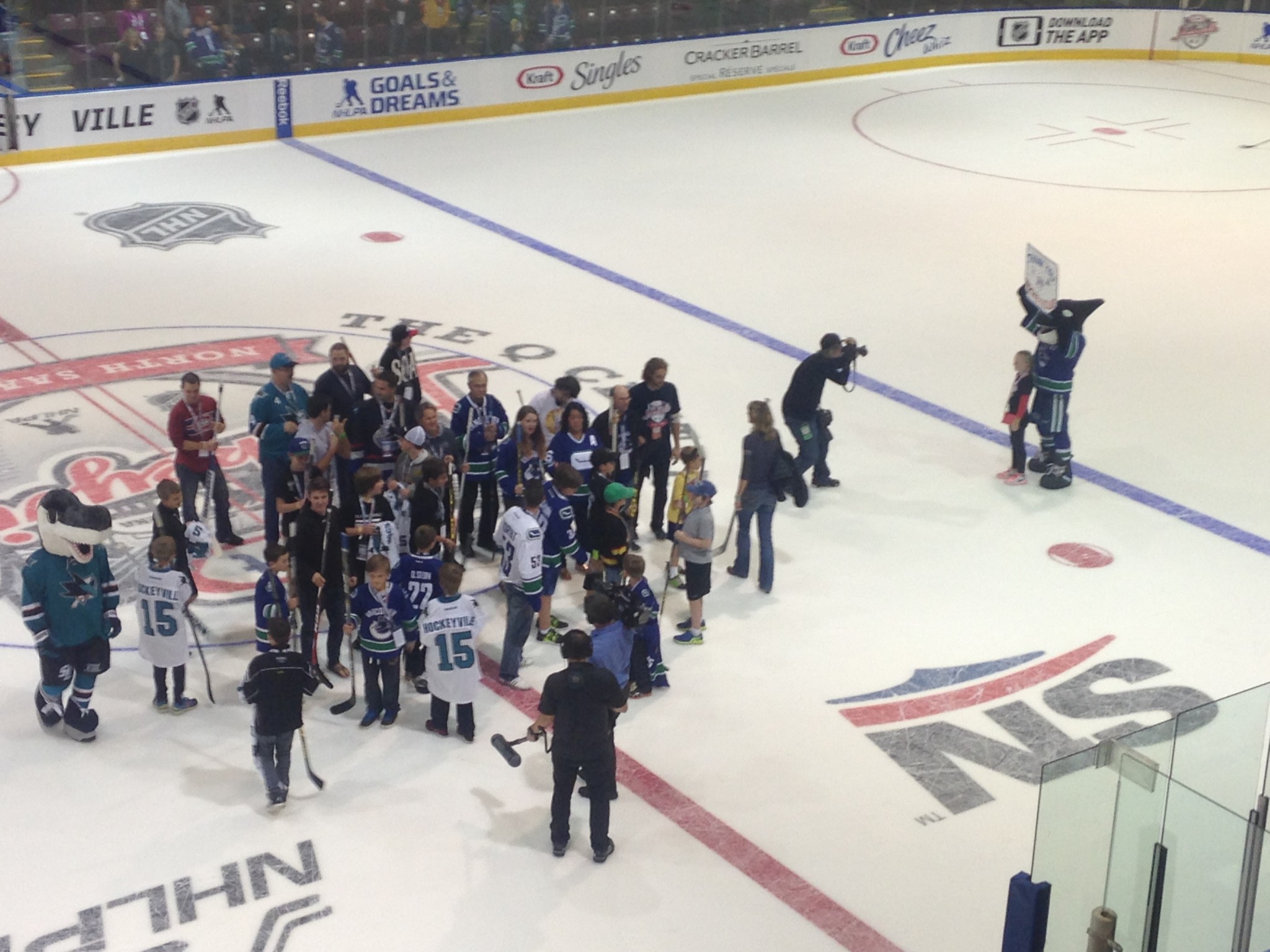 But not to worry! All of the kids on the ice received game-used hockey stick instead, which pleased them just fine.

Everyone goes home a winner.

From now until October 5th KD is giving you the chance to win this 24k Gold Noodle. To find out how you can win head to www.kdgold.ca.