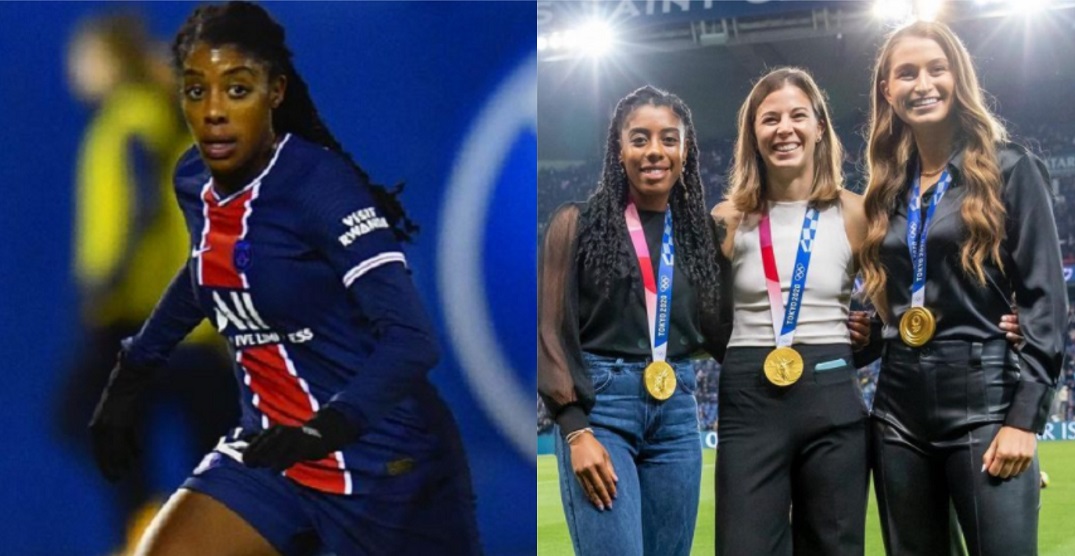 Canadian soccer star Ashley Lawrence hit the pinnacle of her international career thus far with a gold medal this summer at the Tokyo Olympics.

With shootout wins against Brazil in the quarterfinal and Sweden in the final (as well as a one-goal win over the US in the semi-final), Canada definitely didn’t make it easy for themselves or their fans’ heart rates.

But now in her sixth season of playing for Paris St-Germain, the pressure hasn’t exactly let up for the Toronto native.

“I feel like every week [playing in France] is pretty much like a final,” Lawrence said in an interview with Daily Hive. “Every game we have to win three points… that could be the difference of us winning the league or not. It’s not that it’s more of a challenge [than the Olympics], but it’s a different challenge.”

Last year, PSG won their first title after being runners-up in each of the last three seasons, finishing the year with a record of 20 wins, two draws, and no losses. Lyon finished just one point behind them, with PSG’s 1-0 home win over their rivals essentially proving to be the difference.

In an effort to repeat their title, PSG has put up a remarkable Ligue 1 campaign thus far: seven wins, seven matches, with 23 goals scored and zero goals against.

“It’s important to have that mindset of gratitude to look back at the moments of success, but not lose sight of that next task or that next goal,” Lawrence said.

Lawrence, 26, first moved to France in 2017, followed by fellow Canadians Jordyn Huitema in 2019, and Stephanie Labbe this summer. Lawrence said she’s embracing the opportunity to place alongside two of her national teammates.

“I definitely take on that role as an older sister [to Huitema]. And I think sometimes you forget even her age because she’s been on the national team for so long,” Lawrence said of playing with the 20-year-old, who first made the national team at age 16. “But she has a long career ahead of her, and I’m always looking to help that next generation coming through in any way that I can.”

Lawrence made sure to properly celebrate her gold medal this past summer, with a return visit home to see friends and family following the Games. Lawrence said in the past, her accomplishments and awards had sometimes gotten stored away, but she’s got it proudly hanging in her Paris apartment.

“It’s important to have it somewhere where it’s visible,” Lawrence said. “I can see it and just have that little reminder and kind of just put a smile on my face.”

For now, the Canadians’ current challenge is the UEFA Champions League looking to crown the best team in Europe.

Currently 2-0 through their first two of six group games, PSG is set for a back-to-back matchup with legendary Spanish club Real Madrid on November 9 and November 18.

In between the two Real Madrid games, it’s a major clash lined up with Lyon that could have major implications for the final standings.

Ahead of the matchups, Lawrence has teamed up with broadcaster DAZN as an ambassador, which will be showing the Champions League games on their website as well as for free on the platform’s YouTube Channel.

Lawrence hopes that Canadians who enjoyed watching the Olympic experience can tune in to check out PSG’s Champions League run. DAZN and Lawrence are hoping the partnership can help close the sports coverage and viewership gap that exists.

“I want to use my voice to continue to push and use my platform and speak on my experiences and just provide ways on how we can continue to grow the game,” Lawrence said.

“Just the visibility, I think that was kind of the missing piece,” Lawrence added. “Hopefully [this partnership] is a spiral effect to have more investment and help elevate the women’s game. Hopefully there’s a lot of people tuning in and they’re going to be able to experience these top performances.”