Last week on May 16, Godzilla director Gareth Edwards released a new set video and photo to update fans on the film’s status and to mark the one-year countdown to its 2014 release. The latest Godzilla filming location in the city is BC Place Stadium, converted into a FEMA emergency shelter for the monster attack victims.

Godzilla has been filming across British Columbia since March, including at the Vancouver Convention Centre, Nanaimo, the B.C. interior and Steveston. The film has a budget that reportedly exceeds $100-million and it stars Bryan Cranston (Malcolm In The Middle, Breaking Bad), Aaron Taylor-Johnson (Kick-Ass), and Ken Wattanabe (Letters from Iwo Jima, The Last Samurai, Inception).

VIDEO: Director Gareth Edwards speaking on location at BC Place:

Sidenote: thanks to BC Place’s recent major renovations which included seismic upgrades, the stadium is now capable of being the region’s emergency shelter in the event of a natural disaster.

Bonus photo from Twitter’s @iPhilFlash of what looks to be a military beach landing craft at the film set in Steveston: 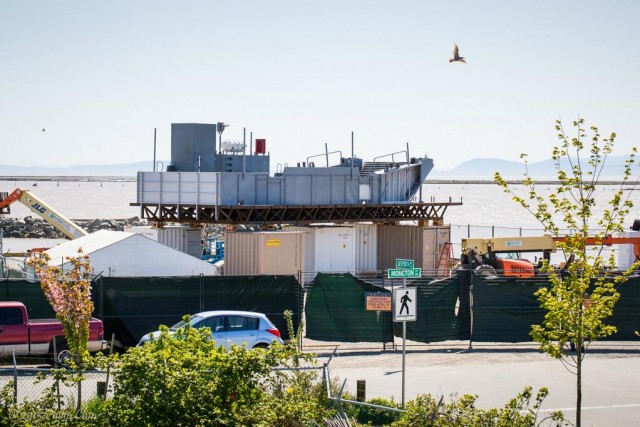