The plan for a 22 floor office building adjacent to GM Place, which was put on hold in 2008 amidst the credit crisis, is once again back on the table and ready to proceed.  It is rumoured that two large companies are interested in the space. Lululemon perhaps? Vancouver’s office market as a whole has seen significant interest of late and is a great sign for the city in attracting more business.

The project is ready to break ground in September as all approvals necessary are for the most part in place. This would make it the first significant office only building to be developed in the downtown core since Bentall 5. That is not to say no other office space has been built during the last boom, however most of it went unnoticed as it came in the form of mixed-use buildings dominated by its residential counterparts.

The notion that large companies are fleeing to the burbs is thrown out there often (mainly by suburban politicians) but proven to be unrealistic, just ask Surrey. Even companies looking for lower class office space are now looking in East Vancouver’s Broadway Tech Centre or on the Broadway corridor both of which will see further development in the future. Another example is when Richmond lost Nintendo of Canada, which now has leased space in East Vancouver’s Tech Centre.Microsoft was also looking at Vancouver, but at the time there was no suitable inventory.

Other office towers being proposed are the 15 floor building at Cambie and Marine and the 25 floor Bentall 6 tower at the corner of Alberini and Thurlow (across the Shangri-La). It should be noted that both The Jameson and the Private Residences at Hotel Georgia developments also have significant portions allocated towards office space. Anyway you slice it, this is excellent news for Vancouver and like I said before, that area will be unrecognizable once the BC Place roof/casino developement is done and the 20 towers of Concord Pacific are developed. 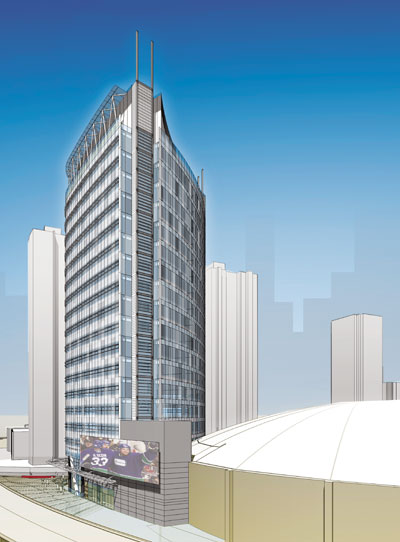