If you ask the closest gluten-free person to you what it is that they miss the most by giving up wheat, 9 out of 10 will reply, “beer.”

Gluten-free beer is a relatively new phenomenon in the marketplace. Many of the first ones to be launched are made of sorghum, a gluten-free grain that’s grown primarily in the deep south. The problem with brewing with sorghum is that it’s difficult to infuse it with hops, therefore giving it that traditional beer taste that many people appreciate. Other beers are made in traditional ways, but then are treated with an enzyme to have the gluten removed from them, making them not entirely gluten-free, but low in gluten. 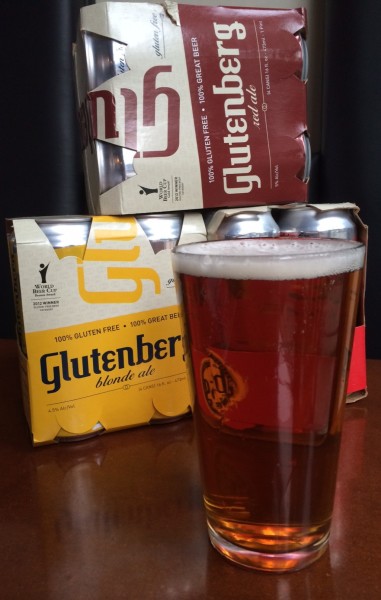 Glutenberg is a new Canadian gluten-free beer, brewed out of a craft brewery in Quebec, offers a fully gluten-free experience, and a very tasty beer to boot!

The brewery got its start through social media. One of the owners of the company was gluten-free, and he launched a Facebook campaign looking for the best gluten-free brewer. He found Gabriel Charbonneau, and then the three of them spent the next year and a half playing with recipes and experimenting with gluten-free grains like millet, quinoa, buckwheat and corn. Everything is brewed from scratch, using organic ingredients where possible, in a certified gluten-free facility.

Meanwhile, back in Vancouver, Cris and Ben, a couple of local guys who were passionate about craft beers and ciders decided to start an agency and import their favourites. They called themselves Untapped Craft Imports, and started looking for a gluten-free option to add to their roster. One sip of Glutenberg, and they were ready to strike a deal.

“Beer needs to taste good,” says Ben on a Tuesday afternoon at the Alibi Room, over a pint of Glutenberg’s Red Ale (where they serve it on tap). “It’s our mission to bring back the love of beer to people who are gluten-free. We’ve been doing tastings all over, and ultimately, people can’t tell that the beer is gluten-free. It’s just really good beer.”

The American Pale Ale is Glutenberg’s flagship beer, and is brewed with millet, buckwheat, corn, candy syrup, demerara sugar, quinoa, hops, and yeast. It’s the hoppiest of the three, and stands up to being paired with stronger flavours, like curry and saffron.

The Red Ale is the darkest of the three, heavier-bodied, and deeper in flavour. It won the gold award (Glutenberg swept the awards in this category, winning gold, silver and bronze) at the World Beer Cup in 2012. Chestnuts help to deepen the colour of this beer, and it pairs well with pub-food. I tried cooking with in in a Gluten-free Beer Mac ‘n’ Cheese, with delicious results.

Blonde was the most drinkable of all three, for me. A light beer, with a citrusy finish, this is the perfect beer for warm, patio-drinking weather. It’s the least complicated of the three brews, as well, containing only water, millet, corn, demerara sugar, hops, and yeast. It’s also their best-seller.

If you want to try Glutenberg for yourself (or with your gluten-free friends!), you can do so at many of the better private liquor stores in Vancouver, like Legacy, Darby’s, Cross Town, or Park Royal. You can also enjoy a pint on tap from The Naam, Edible Canada, Biercraft, Rouge Kitchen and Wetbar, and, of course, The Alibi Room.