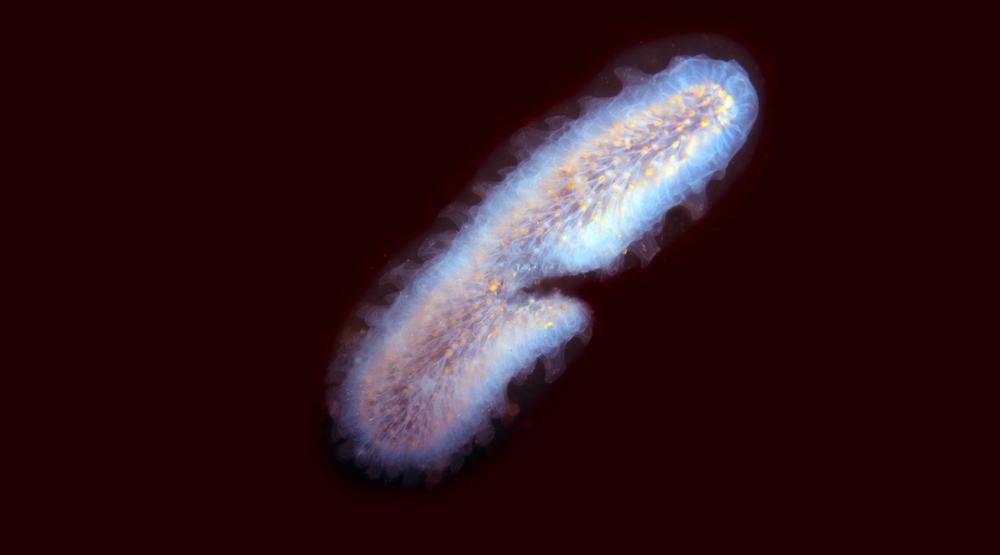 Pyrosomes are “mysterious as they are strange,” and they’re showing up in droves in the waters of the Pacific Northwest.

The jelly-like organisms, which glow in the dark and are typically found in more tropical waters, have “exploded in number” closer to home in recent months.

Each pyrosome is made up of small, multicellular organisms – linked together to form a tube-like colony that is closed on one end.

They are filter feeders and use cilia to draw plankton into their mucous filter.

“I have been working here about 30 years now, and had never seen a pyrosome until 2014 when I saw a few in southern Oregon,” said Ric Brodeur, with the Northwest Fisheries Science Center’s (NWFSC) research station in Newport, Oregon.

We’re switching from launch to recovery to troubleshoot ROV cam. In the meantime, enjoy another pyrosome party near the surface! #ONCabyss pic.twitter.com/BP6Ihar6LL

In fact, a five-minute midwater tow of a research net off the Columbia River in late May brought up approximately 60,000 pyrosomes.

Scientists then “spent hours” sorting through the massive catch to find the rare fish they were targeting.

“We don’t know the exact reason why they are here as they are generally found offshore and at more tropical latitudes,” Brodeur said.

However, he speculated that warm conditions off the West Coast during the last three years and relaxed upwelling “may have allowed offshore water to come onto the shelf.”

Upwelling is a process in which deep, cold water rises toward the surface.

But regardless of the reason for the increase in pyrosomes, “they are causing a lot of problems for the salmon and shrimp fisheries,” Brodeur noted.

“They are filter feeders, their main prey are any items are phytoplankton, the base of the food web,” elaborated Moira Galbraith, a Zooplankton Taxonomist in Sidney, BC.

Galbraith told Daily Hive that “basically they would be in direct competition with other filter feeders that rely on phytoplankton for their food source.”

The main problem, Galbraith said, is that the creatures are simply “in the wrong place.”

Pyrosomes have no natural predators in the region, meaning they “could well be eating all the food that would normally go to larval crustaceans and fish.”

Another issue, she explained, “is that if the waters that they are swimming in now, cools off, it may lead to a mass death where all these colonies fall to the bottom making a layer of decomposing bodies thick enough to rob surrounding waters of oxygen leading to an anoxic event.”