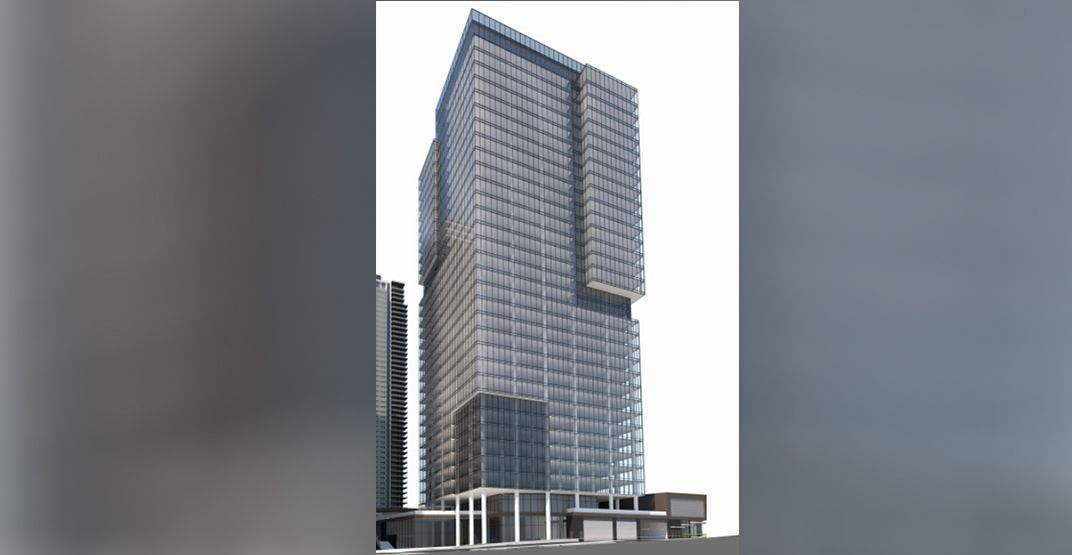 Artistic rendering of the office tower at the Gilmore Place redevelopment in Burnaby. (Onni Group)

Burnaby’s largest office tower has been proposed for the new Gilmore Place redevelopment in the Brentwood Town Centre area.

Local developer Onni Group has submitted a rezoning application to the City of Burnaby for the planned office tower at 4161 Dawson Street, within the 12.3-acre redevelopment’s second phase, located just east of SkyTrain’s Gilmore Station.

The proposal calls for a 37-storey office tower with 695,614 sq. ft. of premium office space, plus a three-storey podium with retail space. This building will have a floor area ratio density of 7.1 times the size of its lot. 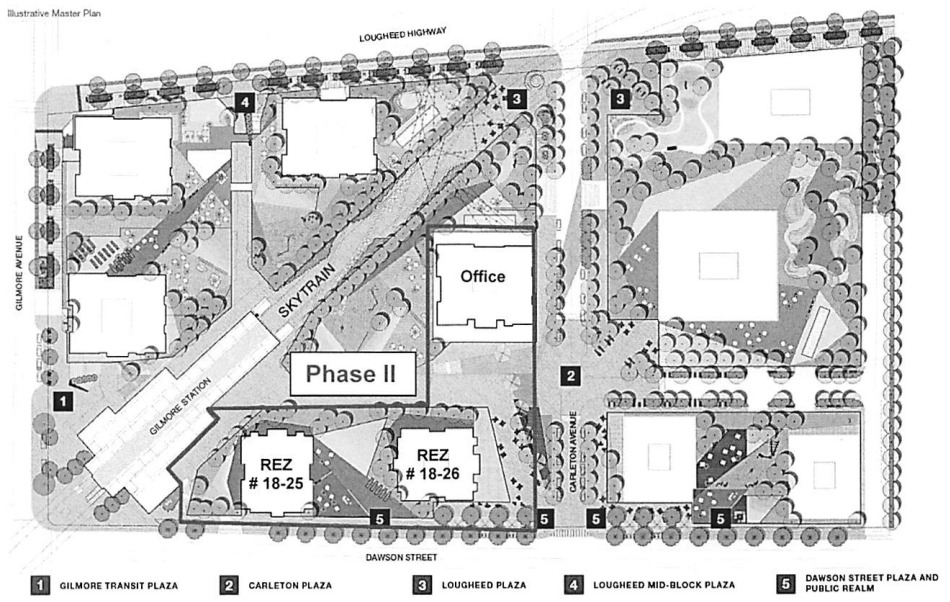 “A major focus of the development is the creation of significant office space with large floor plates that can be demised to appeal to many organizations offering a multitude of business and job opportunities,” reads a city staff report.

When combined with the existing 165,000 sq. ft. of office space already found on the site, the total amount of future office space at Gilmore Place could provide employment for over 4,000 people. 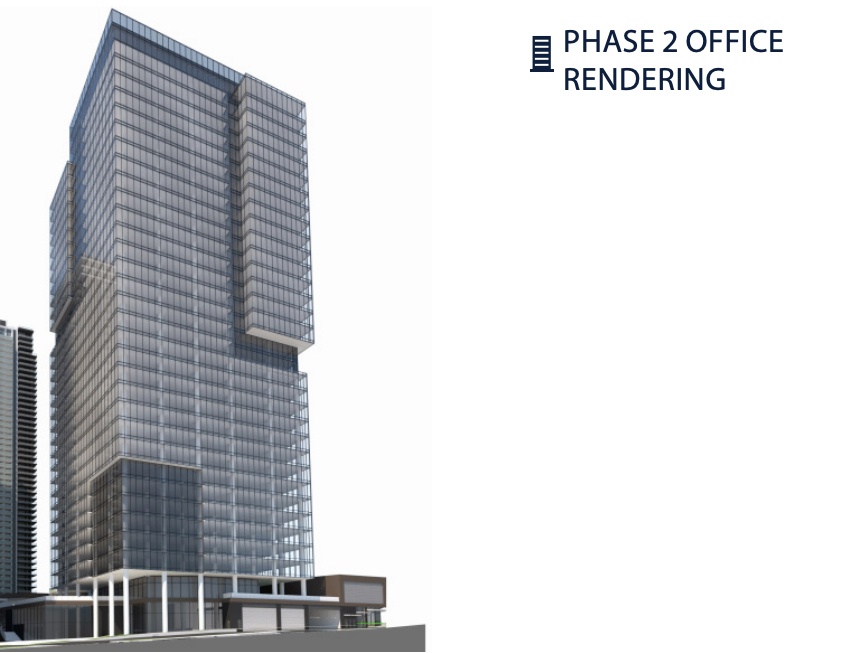 Artistic rendering of the office tower at the Gilmore Place redevelopment in Burnaby. (Onni Group)

The total floor area of this office tower will be comparable to the largest office buildings in downtown Vancouver, and just slightly larger than the 684,000 sq. ft. within the Brian Canfield Centre (aka The Boot), which is fully leased to TELUS until 2026.

Other significant office buildings in Burnaby include Electronic Arts’ Burnaby campus has about 450,000 sq. ft., the first two Metrotowers have a combined 616,000 sq. ft., and the recently completed Metrotower III — owned by Metro Vancouver Regional District — has 414,000 sq. ft.

As well, this office tower is, at the moment, the second largest office building proposed or under construction in the region, coming just after the 1.13 million sq. ft. of office space being built within the Canada Post redevelopment in downtown.

Site preparation is currently underway for the first phase on a parcel immediately adjacent to the SkyTrain station, on the westernmost end of the redevelopment site. It will include Metro Vancouver’s tallest office tower — a 700-ft-tall, 64-storey landmark tower, significantly taller than any building in downtown Vancouver, with 643 homes.

Two other phase one towers, a 51-storey tower and 43-storey tower, will have 920 homes combined. 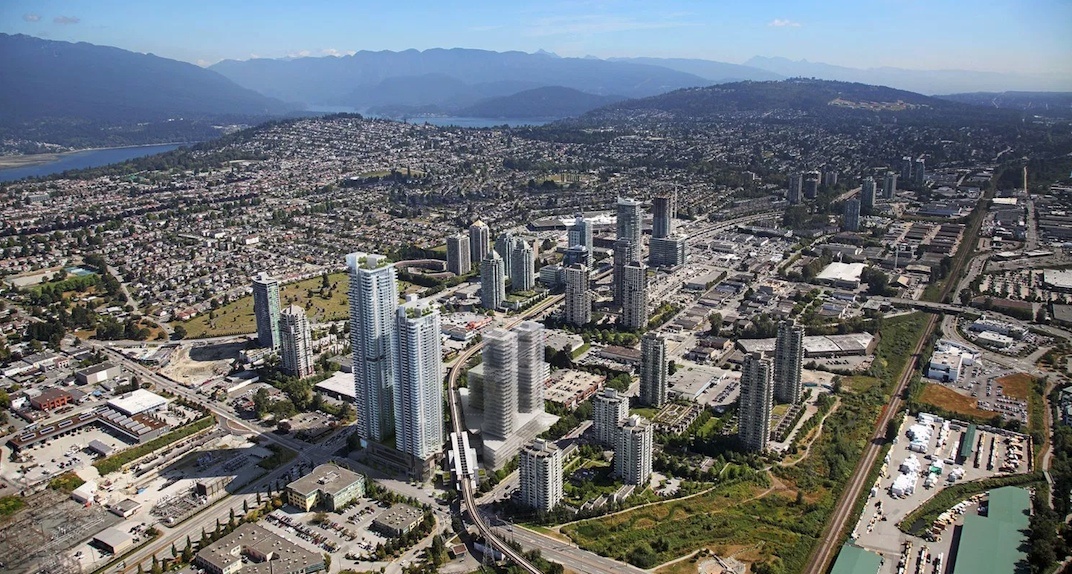 Once all of the phases of the redevelopment are complete, Gilmore Place will have about 3,500 homes spread over 2.7 million sq. ft. of residential floor area and 450,000 sq. ft. of retail space within a total of seven towers.

The entire redevelopment will have an interconnected public realm of public plazas, open spaces, covered connections, and new pedestrian-only streets, including a city street extension through the site. There will be 1,453 vehicle parking stalls, including 787 stalls as a result of the second phase. 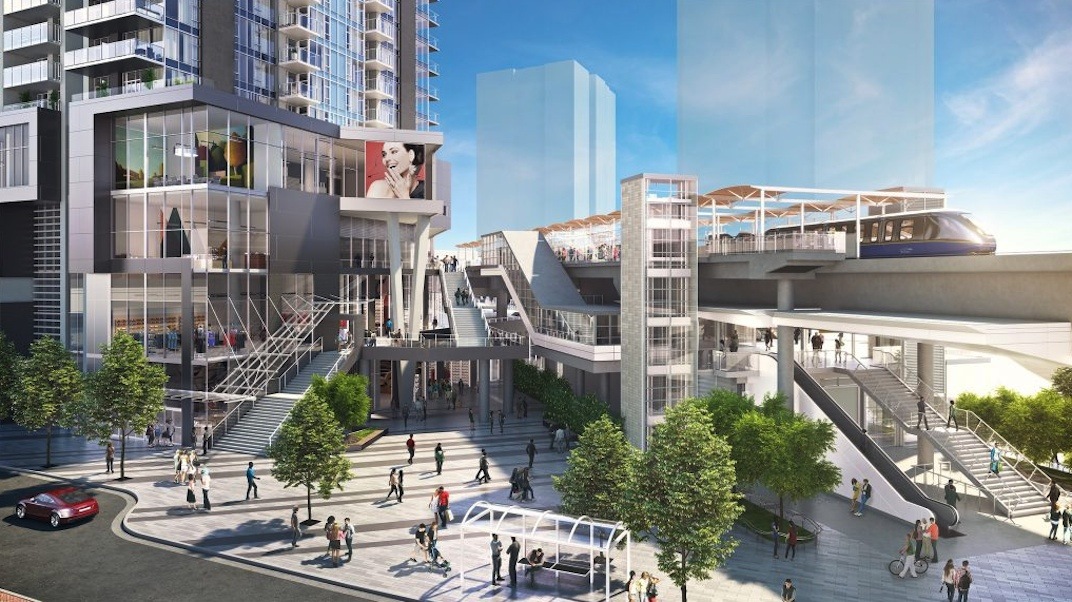