A new game is afoot from one of Vancouver’s independent game dev companies, Kerberos Productions!  A new Kickstarter campaign has been launched today for a game about mad scientists, mayhem, and GIANT MONSTERS. It’s called Kaiju-a-Gogo.

Kaiju-a-Gogo is a hybrid of light strategy and action genres, with gameplay that the developers describe as “Evil X-Com Meets Evil Genius.” The player takes on the role of a fledgling Mad Scientist who has built the first human-controlled Kaiju in the world. While your rivals race to catch up with your genius and build their own Kaiju, you have a five-year-window to use your Kaiju to achieve TOTAL WORLD DOMINATION. 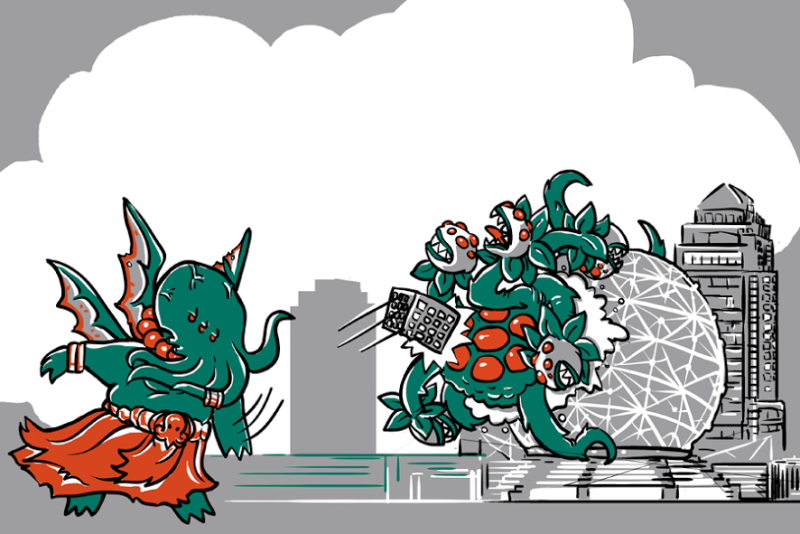 Start the game by choosing one of three monsters and its associated Mad Scientist character. You will then begin play at your Secret Lair and launch your first attacks upon the unsuspecting world. As you crush city after city, the resistance of the people in that region will weaken, until eventually they bow to your Kaiju and admit that you’re in charge. When you have conquered all of the regions on the globe, you win! You are the world’s Supreme Dictator and Number One Monkey. Simple as that!

Kaiju-a-Gogo is the third crowd-funding campaign for Kerberos since they went full-indie in October 2012. The first successful campaign for the Vancouver-based developers produced “Sword of the Stars: The Pit”, a science-fiction Roguelike which has since become a cult hit and generated three DLC expansions, the most recent (Pilgrim) released for Easter 2014. The team’s second campaign produced the turn-based strategy wargame Ground Pounders, already available for PC, Mac, Linux and Android in Early Access on Steam. Kaiju-a-Gogo will also be a multi-platform release, with support for PC, Android, Mac, Linux and iOS .

The Kickstarter campaign for Kaiju-a-Gogo is now live, with a modest funding goal of $50,000. The team is working on a short development cycle, and proposes to deliver the finished game by Thanksgiving 2014.

You can check out the Kickstarter campaign here: https://www.kickstarter.com/projects/kerberosproductions/kaiju-a-gogo