Gerald Auger is a man who wears many hats. After being discovered in Grande Prairie, Alberta in the nineties, the actor quickly rose to fame, starring in notable works like the Emmy Award-winning film Dreamkeeper and the Steven Spielberg-produced miniseries Into the West. Auger also produces, writes, and directs his own pieces, including the documentary Honour Thy Father, which won Best Film Representing Cultural Diversity at the Alberta Motion Picture Industry Awards in 2009. He helms a production house, Black Eagle Entertainment; in 2016, he’ll appear alongside Edward Norton in the forthcoming HBO series Lewis and Clark.

There is something, however, that sets Auger apart from most of his Hollywood colleagues — his values. As a Woodland Cree raised in Alberta, Auger keeps his culture and its teachings close to his heart, using the words of his elders and his Creator as both his ground and his guide. One of his strongest principles? Honouring women. “If it wasn’t for the woman, we as human beings wouldn’t be,” Auger states. “We as men are strong physically, but the woman is way more powerful emotionally, mentally, physically, and spiritually because she gives life.”

This foundation is the connecting thread between the three films Auger has lined up for release next year. In Lost Face, which is based on a collection of short stories by iconic author Jack London, women can be seen as a driving force, particularly in The Wit of Porportuk. Here Auger portrays Makamuk, a fierce warrior who steps up as chief of his tribe against Russian fur thieves.

Bohemian Blood, which Auger completed for Alberta’s Frightening 48 Hour Film Challenge (an intense competition where teams are assigned a character, prop, and line then have two days to write and shoot), was inspired by missing and murdered Aboriginal women. “It’s all about these women that kill these Johns because of what happened in their life,” Auger explains. “So honestly, the whole time that we were doing this, I kept getting these flashes of the missing and murdered Aboriginal women in Canada. The lifestyles that these women had led or were living at that time.”

The third film, Petersburg. A Selfie, is a collection of seven stories told from the perspective of seven women. In “Anichkov Bridge,” one of the tales from the series, Auger plays a Native American spirit who helps a woman love her life again. 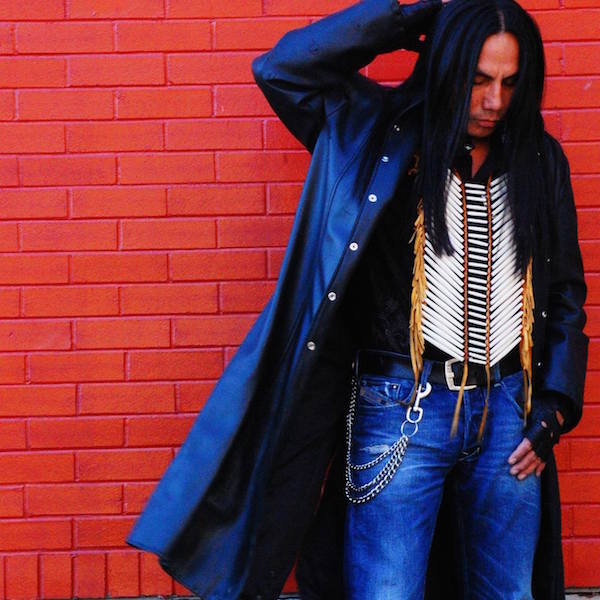 As a figure who has delivered motivational speeches, conducted sweat lodges, and shared his stories with other Canadian communities — work he’s received both the Rotary International Integrity Award for the Avenue of Nations in Alberta and National Native Role Model by the Governor General of Canada for — this role of empowerment is one quite familiar to Auger himself.

“One of the things that I’ve learnt is that there’s not much love left in this world,” he says. “There’s not that many real human beings left in this world — real human beings in a sense who understand love, kindness, and compassion. Everything happens for a reason and works for a purpose. It’s up to us to choose everything that happens to us in life. If it’s a good thing, give thanks. If it’s a bad thing, learn from it to become a better human being.”

“We need to understand that Mother Earth — who brings life to us everyday — we need to honour her for what she brings, because if it wasn’t for Mother Earth, we wouldn’t exist as humanity. Just like as a woman, in that sense. If humanity doesn’t understand and treat a woman for who they are — the most powerful and most sacred beings in this world — we wouldn’t have humanity. So, it’s going back to that original truth, to those original teachings of understanding that life is what you make it.”

For Auger, working as an actor has given him an opportunity to not only share his wisdom, but to honour his people and, in turn, debunk cultural stereotypes that they’ve faced. This, he maintains, is his life’s purpose and film is the platform that his Creator has provided for him to fulfill it.

“If something is given to me, the first thing I look at is ‘does this speak to me spiritually? And is it going to help humanity in terms of what I need to do with this film?’ That’s the first place I go,” he explains. “The second place I go is that if it’s stereotypical, then I don’t want to be part of it…. We need to back to that place, to understanding that there is only one race. The human race.”