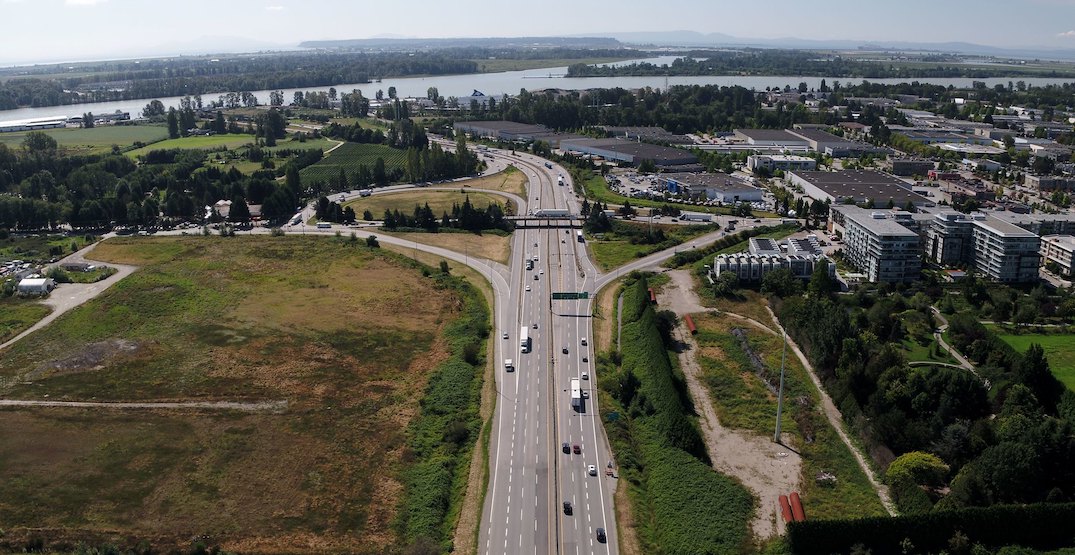 Aerial of the Steveston interchange for Highway 99. (Government of BC)

Downsized components of the Highway 99 upgrades that were planned for the previously cancelled George Massey bridge project are being advanced starting this year.

The provincial government announced this week it will be making improvements to the highway in Richmond and Delta over the coming years, before construction begins on a replacement crossing for the aging tunnel.

This new interchange at Steveston will also see upgrades to transit bus stops and connections for pedestrians and cyclists across Highway 99.

South of the tunnel, the bus-only lanes on the shoulder along Highway 99 will be extended in both directions.

Highway 99 southbound will see its shoulder widened over a distance of 2.5 km for a bus-only lane between the Highway 17A (72nd Street structure) and Highway 17 interchanges.

The shoulder over a 3.4 km span from Highway 17 to Ladner Trunk Road will also be widened for a bus-only lane.

A northbound bus-only lane on Highway 99 will be added by widening the shoulder for 3.5 km from north of Ladner Trunk Road to the existing start of the highway’s HOV lane.

Cycling infrastructure improvements will be incorporated into these works, including a new multi-use pathway from the Oak Street Bridge into Richmond, and upgrades to cycling facilities along Highway 17A.

However, these Highway 99 corridor improvements differentiate from those that were proposed for the previously cancelled project, which called for a Highway 99 widening for purpose-built HOV and bus-only lanes instead of using the shoulder, and a new significant three-level interchange at Steveston that incorporates a bus transit exchange.

For the current downsized plans, the provincial government plans to begin the procurement process this week for the Highway 99 bus-only lanes on the shoulders and transit and cycling upgrades. Construction will begin this fall.

The procurement process began yesterday for the Steveston interchange replacement, with construction expected to begin in 2022 for completion in 2025.

“Work is starting this year on improvements to Highway 99 for transit users and cyclists, and a new Steveston interchange will be welcome news for commuters frustrated with that bottleneck,” said Rob Fleming, BC Minister of Transportation and Infrastructure, in a statement.

“With these improvements, and a new crossing to replace the old George Massey Tunnel, we’ll improve safety, reliability and connectivity on the Highway 99 corridor on both sides of the Fraser River.”

The provincial government previously suggested the replacement to the 1959-built, four-lane tunnel could be a new eight-lane immersed tunnel, but this has yet to be finalized. A business case for the new crossing is still in the process of being reviewed.

A replacement tunnel or bridge is not expected to be ready until towards the end of this decade at the earliest.

Earlier this year, the provincial government completed $40 million in interim safety and systems upgrades to the existing tunnel, such as new LED lighting, and upgrades to ventilation and electrical systems, and tunnel drainage.

The previous project for a 10-lane replacement bridge with 24 km of Highway 99 improvements was slated to cost $3.5 billion, with construction beginning in late 2017 for completion in 2022.