Who will prevail in this most epic debate, the geeks or nerds? Geeks Versus Nerds Vancouver returns Saturday, October 24 for their next debate: “Would you rather be a were-teen or a witch for prom?”

Geeks Versus Nerds Vancouver, as the name suggests, is a comedic live debate that celebrates ‘nerdiness’ and ‘geekiness’. The focus of the show is to keep the audience laughing as the debaters vouch for why their ‘side’ is better.

This is the 26th instalment of this hilarious event, also known as ‘Cutting Class,’ which has a new home at the Seven Dining Lounge (53 W Broadway, Vancouver) for its latest outing. In the new venue, the first debate will be Sabrina the Teenage Witch Vs. Teen Wolf (whose powers make high school cooler?) and Hannibal Lecter Vs. The Joker (who is the most nightmare-inducing serial killer?). 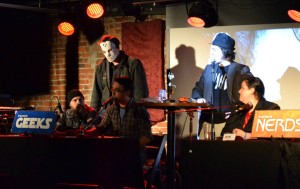 The night is packed full of nerdy and geeky fun, and the best part about attending the debate? The audience gets to decide live who wins and loses. There’s also two costume contests that evening, a ‘debate-related costume’ prize as well as a special ‘all Halloween costumes’ prize. 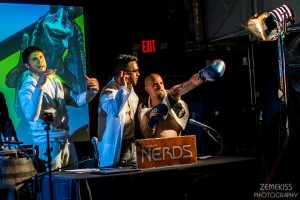 Can’t make the show? No problem. After the show ends, it will be posted as videos and podcasts online for anyone and everyone to enjoy, whether it’s for the first time or the fifth.

Geeks Versus Nerds Vancouver is chock full of local talent (the debaters) and is a deliciously nerdy/geeky night out sure to inspire laughs with some good, clean, comedic competition.

Geeks Versus Nerds  is a one-night only event on October 24 at 7 P.M. at the Seven Dining Lounge (53 W Broadway, Vancouver). You can buy tickets here.