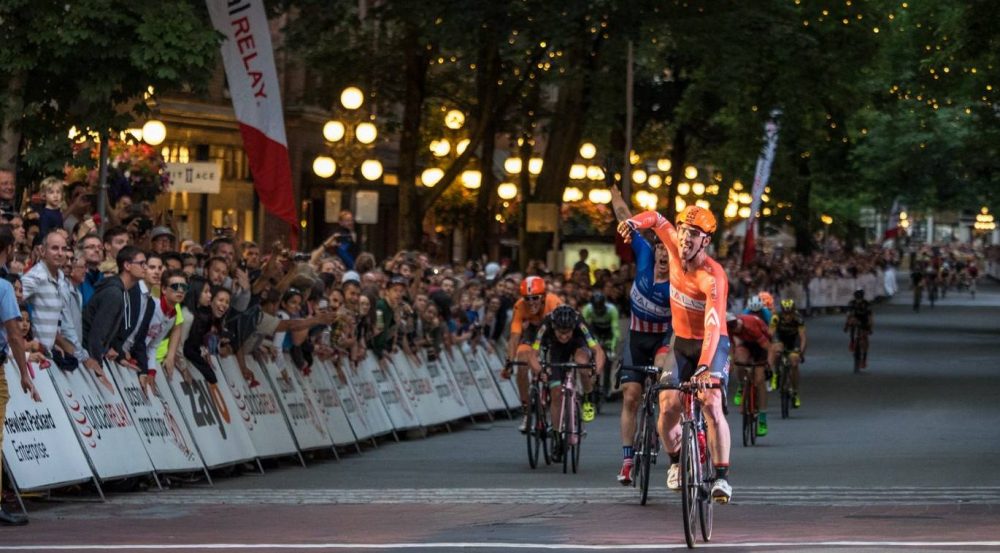 In his ‘Fun Facts’ section of Eric Young’s bio on the Rally Pro Cycling website, he states the racing obstacle he overcame was beating teammate Brad Huff in criteriums. Whether he’s joking or not, Young overcame that obstacle once again and beat Huff on Thursday night to claim the $12,000 Global Relay Gastown Grand Prix.

The race was shortened by ten laps due to nightfall after a fire truck tending to an alarm on Water Street not far from the start-finish line delayed the beginning by thirty minutes. The riders didn’t show any rust though once things got going, with the racing aggressive right off the start of the 1.2 kilometre circuit.

“It was a race from the beginning, the Cylance team had control, they were strong, they were the dominant team of the day, and they showed it,” said Huff, who is the reigning U.S. National Criterium Champion and was fourth in Friday’s MK Delta Lands Criterium. “We’re just happy we were able to execute our plan at three and a half to go to get up there. It got a little crazy on the final two laps with guys coming up, we were really battling Silber with Eric, and they got in our train a few times, but we’re all professionals – we respect Silber, Silber respects us, so we were able to have a clean finish, I was just happy to be able to take Eric to the line. He’s obviously the fastest sprinter in North America, he proved it today.”

The camaraderie among the Rally team is clear, with Young willing to give just as much credit to Huff and his teammates for the win.

“The team did an amazing job being super patient. Incycle was being super aggressive, just totally controlling the front with the Australian guys, and they did a good job of that. So we just had to be really patient, not blow any matches getting frustrated,” the 27-year-old from Geneva, Illinois said. “We waited until about three or four to go, went by them with a great job by Shane (Klime) and Tom (Soladay), my teammates, and then on the last lap, Kris Dahl had a good little attack into two corners to go, he came in third wheel right behind Brad. We just yelled at him out of the last corner, ‘Go with everything!’ and he knows what to do when that happens, 100 metres to go, we just let loose and I couldn’t see anything behind me so with about ten feet to go, I knew I’d gotten it.”

Young’s been racing at the Global Relay Gastown Grand Prix for three years, and after top ten finishes in 2013 and 2014, he came in 16th last year. Huff and the rest of the riders are well aware of the prestige of the Gastown race, but are also thrilled by the hospitality of the BC Superweek communities.

“This is a great race, it’s been going on for over 40 years, this is one of the best crits in North America, we’re just happy to be here, the whole town supports us,” he said. “Every rider here is probably in a host house, and to come here and win with a former two-time national criterium champion, Eric deserves the win. It’s great!”

Third place went to Aussie Michael Rice, who made his second appearance on the podium at BC Superweek. He was third at the MK Delta Lands Criterium last Friday. The 20-year-old had a pretty good idea during the last few laps, which team’s wheel he wanted to be on

“I knew Rally was going to be the team to beat with such a strong criterium squad here. I really wanted to have their wheel going into the last three laps, full credit to Garneau-Quebecor, they set me up really nicely,” said Rice. “I had a bit too much work to do on the last two laps, but I did the best that I could and I’m happy to get third.”

During her 20 year professional cycling career, Tina Pic has won a lot of races, including six U.S. National Criterium titles, but after sprinting to the finish at the 2016 Global Relay Gastown Grand Prix, even she admitted she’s never won a race like this.

“Oh yeah, this is awesome… all these people, and my old teammates are here and it’s just great, the crowds are so fun! I mean, we don’t have a huge team here and we’re really excited!” the 50-year-old from Bountiful, Utah said.

The former four-time USA Cycling National Racing Calendar Points champion is a legend in cycling world and now she earns her place alongside legends like Alison Sydor, Gina Grain, and Verna Buhler as winners in Gastown.

The Happy Tooth Pro Cycling rider unretired from the sport in 2012 and has shown to be just as strong as riders more than half her age. And now she has a $12,000 prize to go along with it.

“A race like this just makes it all worth it, it’s just so fun to come out here and have such big crowds, it’s great!” she said.

Pic was third in Friday’s MK Delta Lands Criterium to kick off BC Superweek and had four top ten finishes at the series in 2015, including fourth at the Global Relay Gastown Grand Prix and the Giro di Burnaby.

Australian riders took the second and third spots on the podium under two very different circumstances. Second place finisher Kimberley Wells rode with one of the biggest teams registered for the race, Colavita | Bianchi out of New Jersey, while third place rider Kendelle Hodges rode without a team, competing independently.

Wells, who was the 2013 and 2015 Australian National Criterium Champion, had the support of her Colavita | Bianchi teammates, including Lauretta Hanson, a fellow Aussie who finished sixth in Gastown a year ago. That said, it was hard for the teams to strategize due to the roar of close to 30,000 spectators in attendance.

“We could barely hear anything out there because these crowds were so loud. Ideally, I wanted to be third or fourth wheel through that final corner, but just the way it played out, I had to jump people before the corner and came through it first, which is a bit of a bridesmaid’s position on this kind of course. It’s a slight uphill and a very slight headwind on the finish straight, so usually people come from behind on the last 50 metres,” the 30-year-old explained. “Just given the way the race played out, I was just going to try to roll those dice and go for the win and risk losing it. Congratulations to Tina Pic, she’s certainly got some speed, so well done to that team.”

Hodges rides for the High5 Dream Team, a professional team from Australia, but is the only member of her team participating in BC Superweek. During the final lap on Wednesday night, she was part of the pack, looking to go for a bunch sprint at the finish.

“I was waiting for the bunch sprint, there are some teams with big numbers and I knew the girls from Australia, Kimberley and Lauretta, would want it to be a sprint. Kimberley went a bit early on that last corner, but it was a good wheel to follow and I knew it would be quick,” she said. “I’m not a pure sprinter, I was just in a good position and made the most of it. It helped there was a bit of an uphill drag, that was good.”

Only 40 of the 76 registered riders finished the 35 lap, 42 kilometre race. The top Canadian was Sara Bergen of Vancouver, who rides for the local Trek Red Truck p/b Mosaic Homes team.

BC Superweek continues Thursday night with the Giro di Burnaby p/b Appia Development in the historic Heights neighbourhood of Burnaby. The youth race starts at 5:30 pm, the pro women at 6 pm, and the pro men at 7:15 pm.