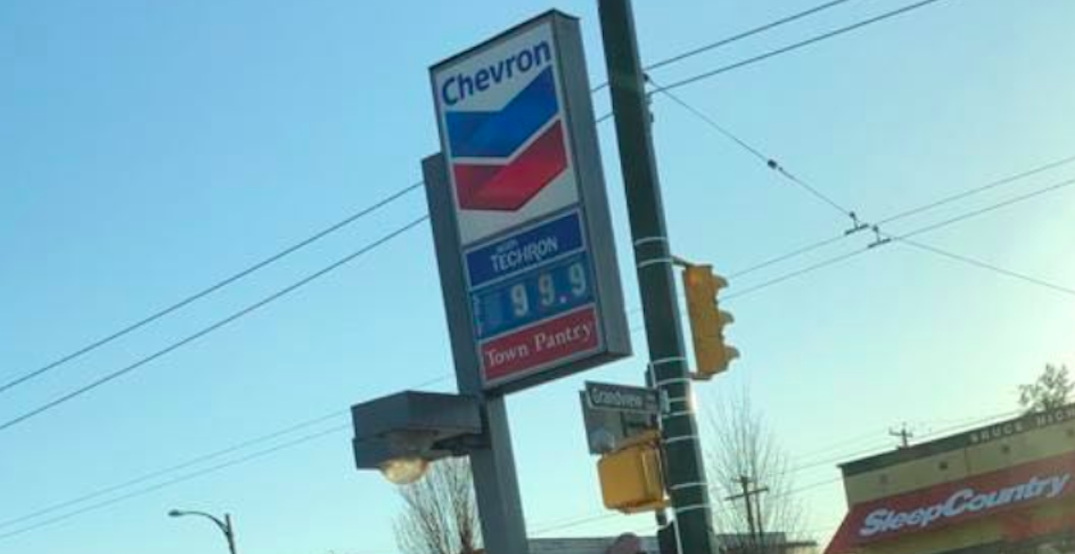 Metro Vancouver gas prices have reached a milestone not seen in years, according to industry experts.

On Friday night, gas stations in the region were posting gas prices of less than $1/ litre.

And while prices were largely above the $1 mark on Saturday, industry experts are predicting the majority of gas stations will drop blow their prices below that threshold as of this Sunday.

⛽️ Price ⚠️: Vancouver and Lower Mainland #gasprices to FALL 4 cent a litre on Sunday March 22 to a high of only 106.9 cents a litre, with many stations offering gas for under 99 cents a litre … a first since January 2008

McTeague also hinted in a tweet that these types of prices are here to stay.

Under $1 will be the new normal in Vancouver Catherine 👍 https://t.co/P5dzMQbdmD

According to Patrick DeHaan, Head of Petroleum Analysis at GasBuddy, the reason for the decline in pump prices primarily has to do with the coronavirus pandemic.

“Back in January, coronavirus started to affect China first, we saw them start to lock down areas of their country, flights started to be cancelled, China started to lock people into cities, schools, businesses, even Apple shut down in China,” he said

These actions contributed to “a huge reduction in oil demand in China, and of course, it didn’t stop there. Now we’re talking about the virus almost worldwide.”

And now with people in Canada and around the world being ordered to stay home as a result, the demand for oil has “plummeted,” said DeHaan.

And when the demand for oil goes down, so do the prices, he added.

When the prices first started falling, it got the attention of OPEC, “who started discussing what they could do to stop this,” DeHaan furthered. “Saudi Arabia-led OPEC invited Russia to talks with them, but “it didn’t work out so well.”

In the end, said DeHaan, Russia and Saudi Arabia “had a bit of a falling out, and that caused both countries to say ‘hey, forget it, we’re going to pump as much oil as we can,’ and that accelerated the downward move.”

Beyond just Metro Vancouver though, the price of gas is falling across the country. In Alberta, prices for a barrel of Alberta oil have dropped below $10.

And in Ontario, prices have fallen to below 77 cents a litre – the lowest in over a decade, with prices expected to go even lower.