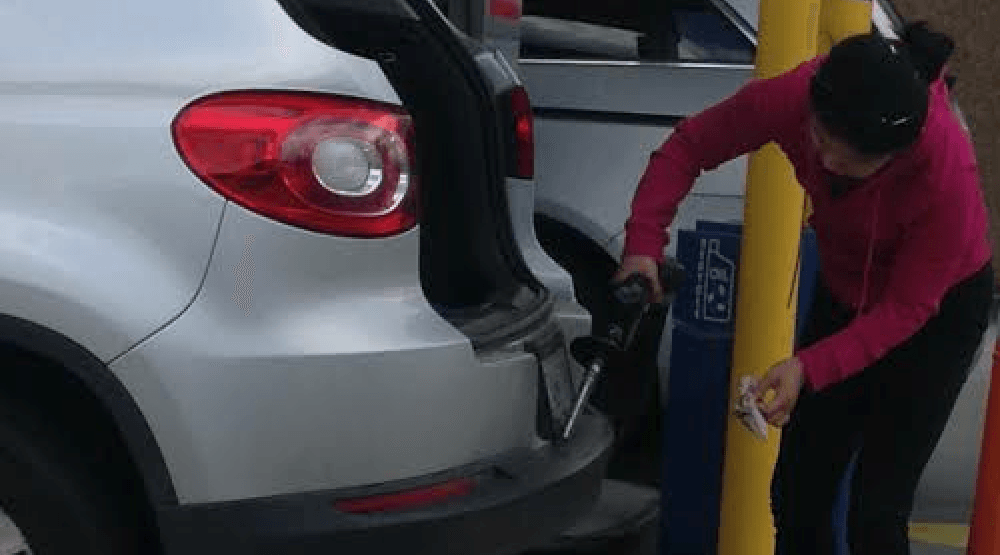 It was a sight Natalie Shantz won’t soon forget.

Shantz was shopping at the Real Canadian Superstore on No. 3 Road in Richmond recently, when a “perplexing” situation caught her eye.

“I had pulled out of the covered parkade and [was] almost immediately stopped in standstill traffic for some time,” she said.

Shantz told Daily Hive that while waiting to make a right turn, she glanced over at the Superstore’s gas station and was baffled by what she saw.

“A lady at the trunk of her car with the pump,” she said. “She was very clearly pumping small bursts of gasoline onto her bumper and wiping it with her tissue.”

The woman did this “a few times” and then “began scraping at the resistant substance with the nozzle itself,” said Shantz.

She initially thought the woman might be filling a small gas container in her “wide open” SUV trunk. “I was in my car at a fair distance,” Shantz explained. “The posted photo doesn’t reveal that I would be possibly 30 feet from her.”

She snapped a picture of the incident and then made her way home.

Upon arriving home, Shantz thought more about what she had seen and simply couldn’t believe it.

Admittedly, the mother of two is “not much of a contributor to social media,” but said she decided to share the photo on Reddit to get some “anonymous validation to the situation.”

Nearly 2,000 comments and more than 400,000 views later, Shantz “didn’t realize the post would get the attention it did.”

Although she said the lady in the photo wasn’t thinking clearly, Shantz does “not wish her to get a negative response that would compromise her at all. That was never my intent.”

Still, Shantz is glad people are talking about the situation. “I don’t believe people consider how unsafe their actions could be and hopefully it can be a photo of warning.”

And when it comes to getting dirt and grime off her own car, Shantz said, “I’ll use the squeegee… just saying.”