Gas companies in BC will now be required to make their wholesale prices public as the province pushes for more transparency in its fuel industry.

On Friday, the Fuel Price Transparency Act (FPTA) came into effect after being passed last fall. Targeting the wholesale market, any company that imports, purchases, stores, and distributes gasoline and diesel products intended for sale at retail stations will need to make regular reports starting for the month of October to the BC Utilities Commission (BCUC).

“For years, British Columbians have felt like they are getting gouged when they fill up at the pump. That’s why our government asked our independent energy watchdog to do an investigation into gas prices,” Bruce Ralston, Minister of Energy, Mines, and Petroleum Resources, said in a release. “The British Columbia Utilities Commission’s (BCUC) inquiry found a lack of competition and significant markups in the BC market, including a 13 cent per-litre premium being charged to drivers that industry was unable to explain. This results in British Columbians paying an extra $490 million per year.” 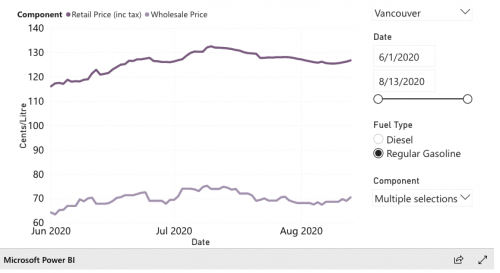 In March, the BCUC was given the authority to act as administrator of the FPTA and will be collecting and publishing data on fuel pricing. The public can view this information online, and the website includes charts that easily allow comparison between wholesale and retail prices, city-by-city comparisons, and detailed information about how the FPTA works.