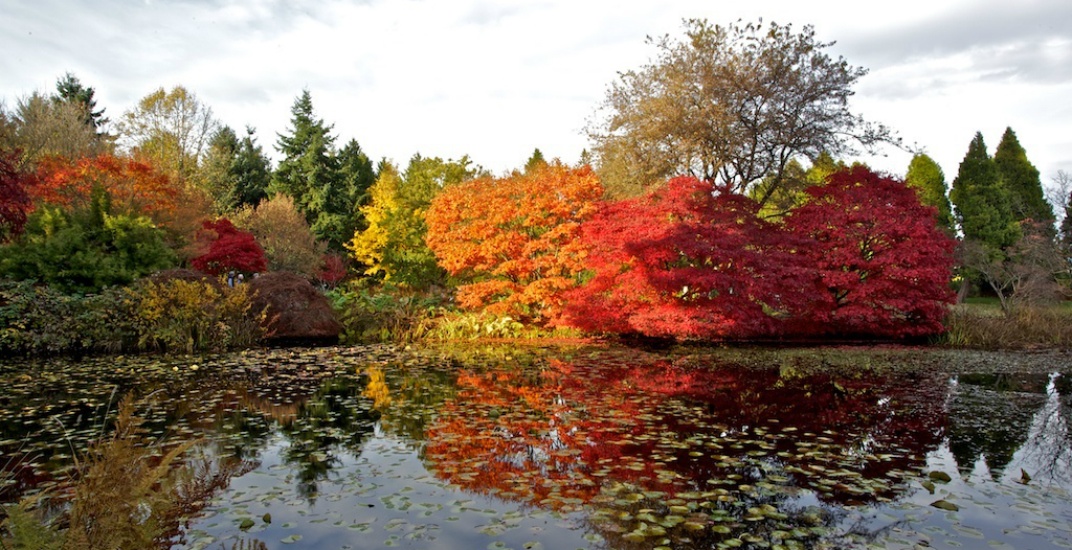 Written by Scott McDonald, provided by Gardens BC

As warm summer evenings give way to the cool and frosty nights of autumn in British Columbia, the leaves of broad leaf maple, oak, poplar, dogwood, liquidambar, alder, and various ornamentals turn to the browns, golds, russets, and deep crimson reds that define Canadian autumn foliage.

Unlike the vast maple forests of eastern Canada, British Columbia’s fall colours appear unevenly, though intensely, so it’s best to know where the reliable hot spots are, as well as the local gems.

By early October, The Butchart Gardens in the heart of the Saanich peninsula on Vancouver Island is home to a parade of red, russet, and golden maples. 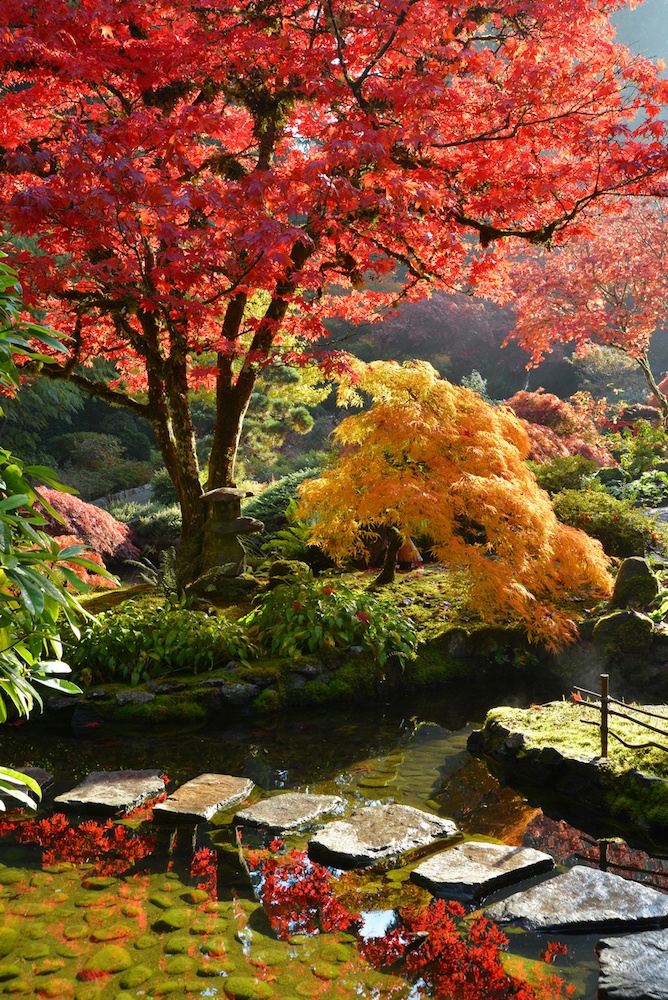 In the Japanese garden, expect a stunning display of colour, predominantly made up of different varieties of Japanese maples, along with ferns and ornamental trees such as variegated dogwoods, topiary evergreens, and pines. 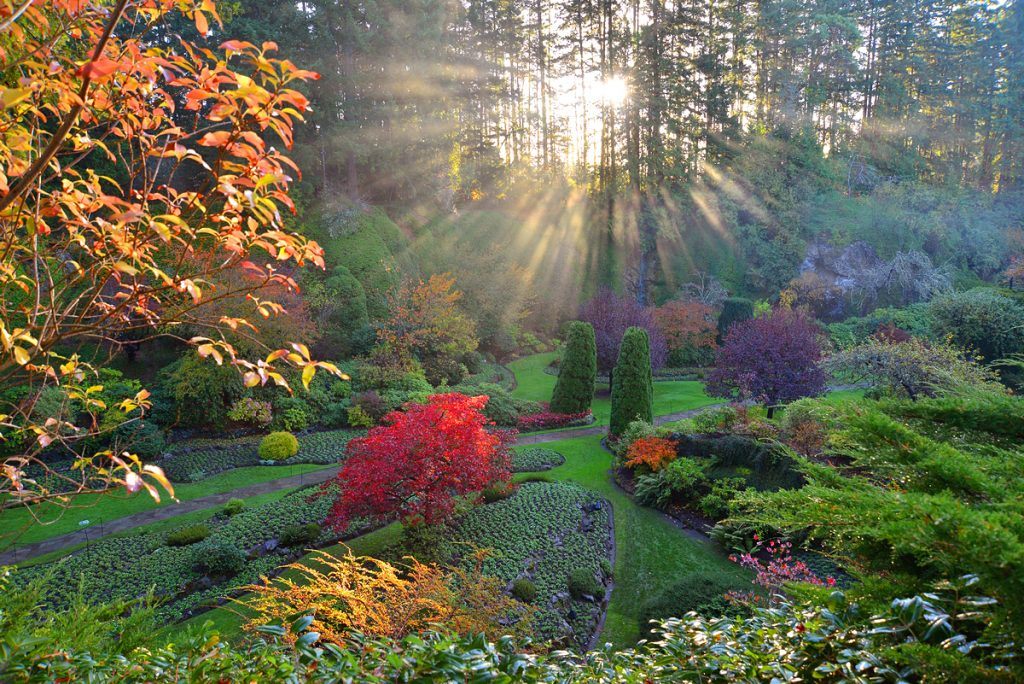 In the Sunken Garden, experience the morning light that defines fall as it shines through the vibrant leaves. Follow The Butchart Gardens blog to see which trees and shrubs will be in full colour and which flowers might still be in bloom during your visit. 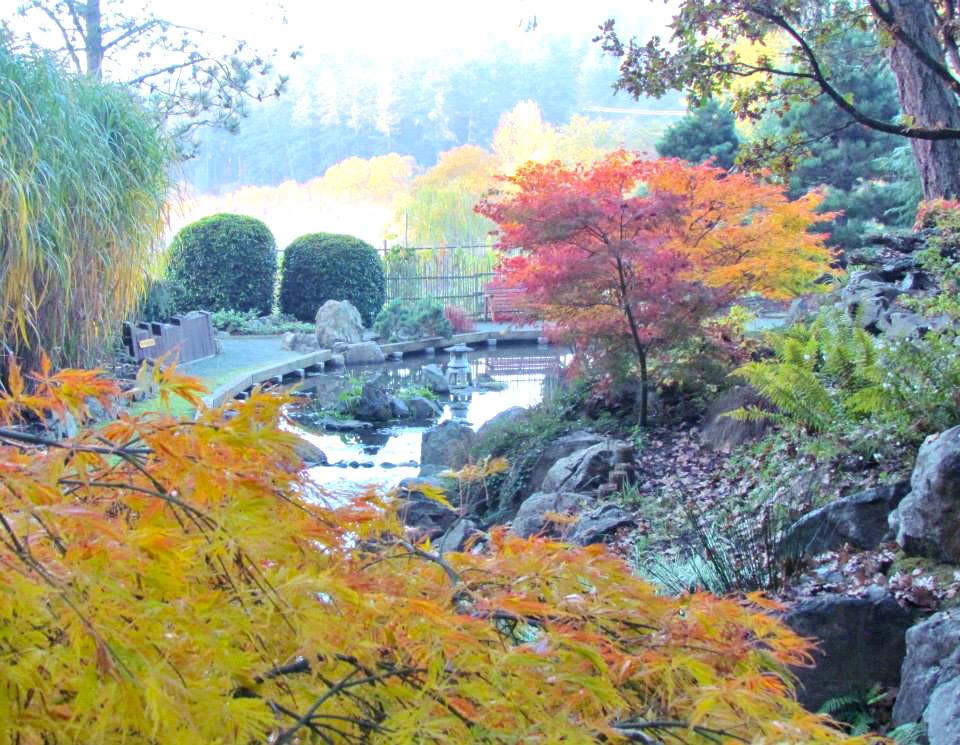 Gardens at HCP/Gardens of BC

Just down the road are The Gardens at HCP (Horticultural Centre of the Pacific), a botanical tour de force. Check out the Japanese garden with Canada’s largest collection of bonsai. The maples are particularly colourful, but so are the ginkgos and ornamentals. On October 4, the Gardens at HCP will receive a spectacular piece of BC history—a tree propagated from the original Golden Spruce from Haida Gwaii will be planted in the garden during a dedication ceremony. Pick up a copy of The Golden Spruce: A True Story of Myth, Madness, and Greed by John Vaillant in the gift shop. 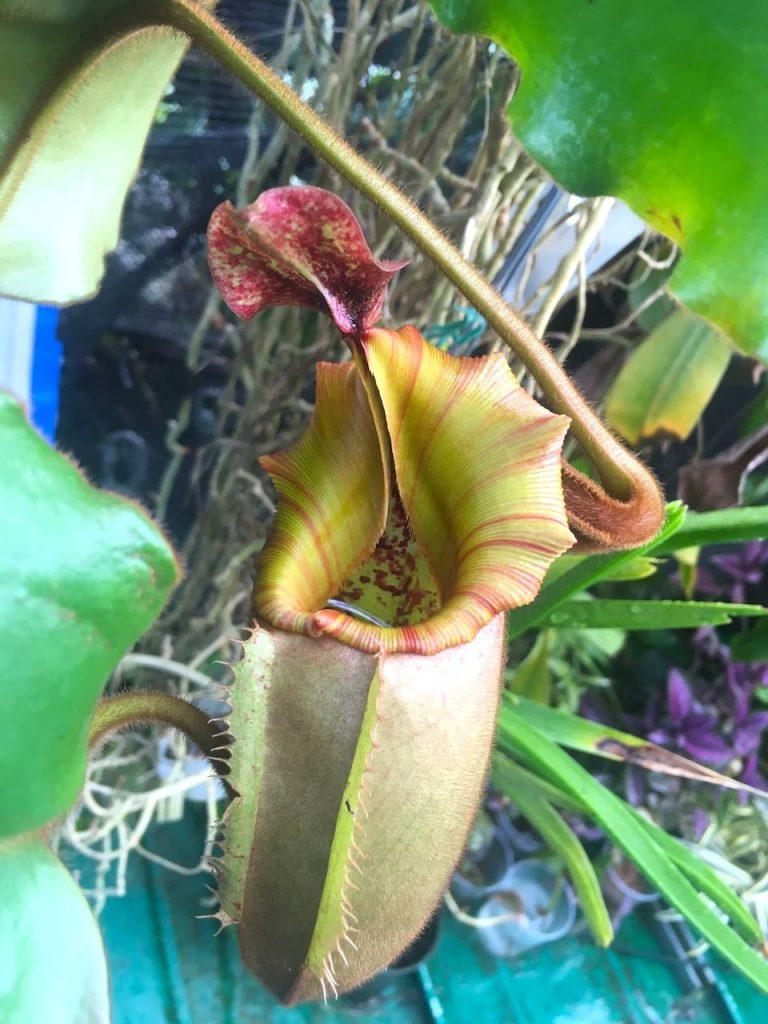 While you are in the area, stop by the Victoria Butterfly Gardens. This autumn they are featuring carnivorous pitcher plants that will be out in full form.

Lesser known is the Japanese garden in Esquimalt Gorge Park. It was originally constructed by Isaburo Kishida in 1907, the same person who built the Japanese gardens at The Butchart Gardens and Hatley Castle. The garden was reconstructed in 2009. Bring your lunch and enjoy a picnic under the colourful Japanese maples. 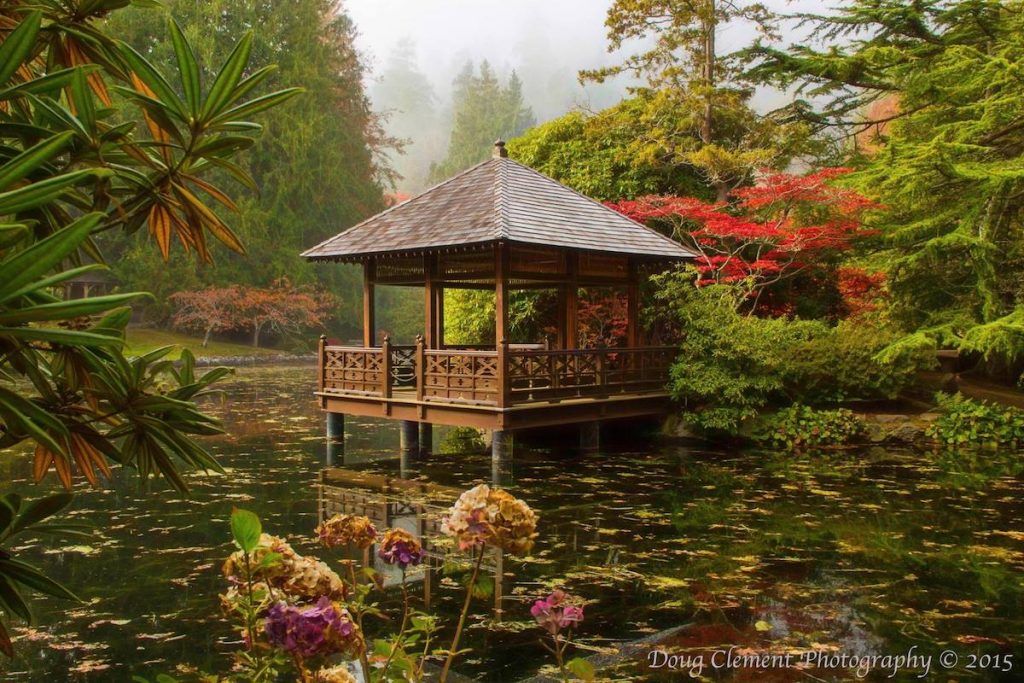 Near Victoria in Colwood, Hatley Park National Historic Site, with its magnificent castle and gardens, is another autumn gem. The Japanese garden, bordered by a lake on one side and bisected by streams, is an oasis of calm with its myriad hues of crimson and gold. Many of the rhododendrons and maples are over 100 years old. 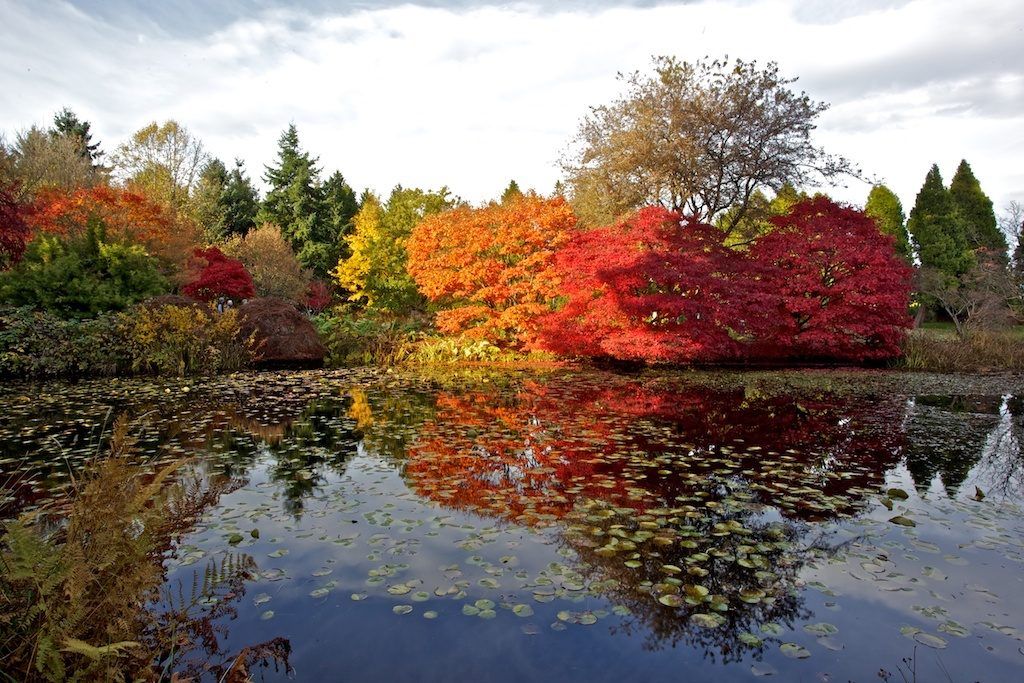 On the mainland in Vancouver, viewing the autumn foliage in Stanley Park is an annual tradition for many locals. Another great place is the VanDusen Botanical Garden. Amid the 7,500 plant species, you can expect to see heathers, autumn crocus, asters, ornamental grasses, rudbeckia, and hydrangeas blooming. The floating bridge on Cypress Pond is a favourite spot for visitors to admire the changing leaves, and the evergreen maze is not to be missed for kids. The garden holds its annual Halloween event, VanDusen Glow in the Garden, from October 24 to 31 this year. 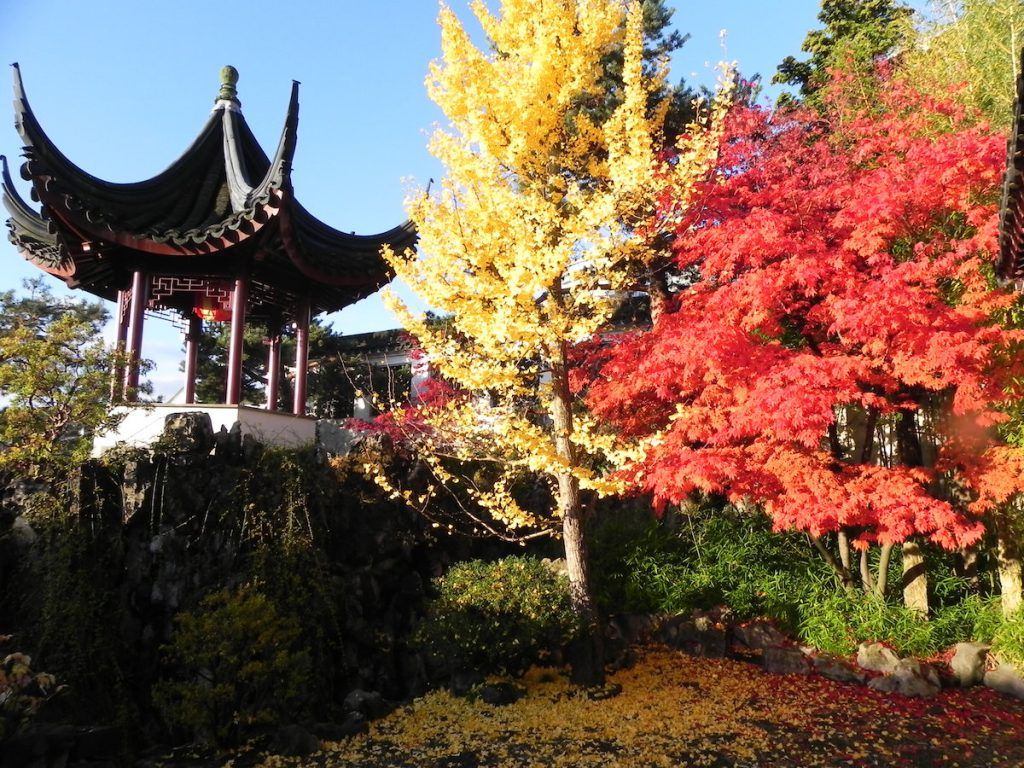 Shades of gold fill the Dr. Sun Yat-Sen Classical Chinese Garden. Slow down and enjoy a moment of solitude in the cool autumn breeze with a cup of hot jasmine tea in your hands. On rainy days, listen to the soothing drips from the furrow-shaped roof tiles, an architectural feature unique to the garden. Don’t miss the stunning foliage of the ginkgo biloba and maple trees in the western corner of the Main Courtyard. On October 6, the garden will host its annual Mid-Autumn Moon Festival. The family-friendly event includes storytelling and live traditional Chinese music. 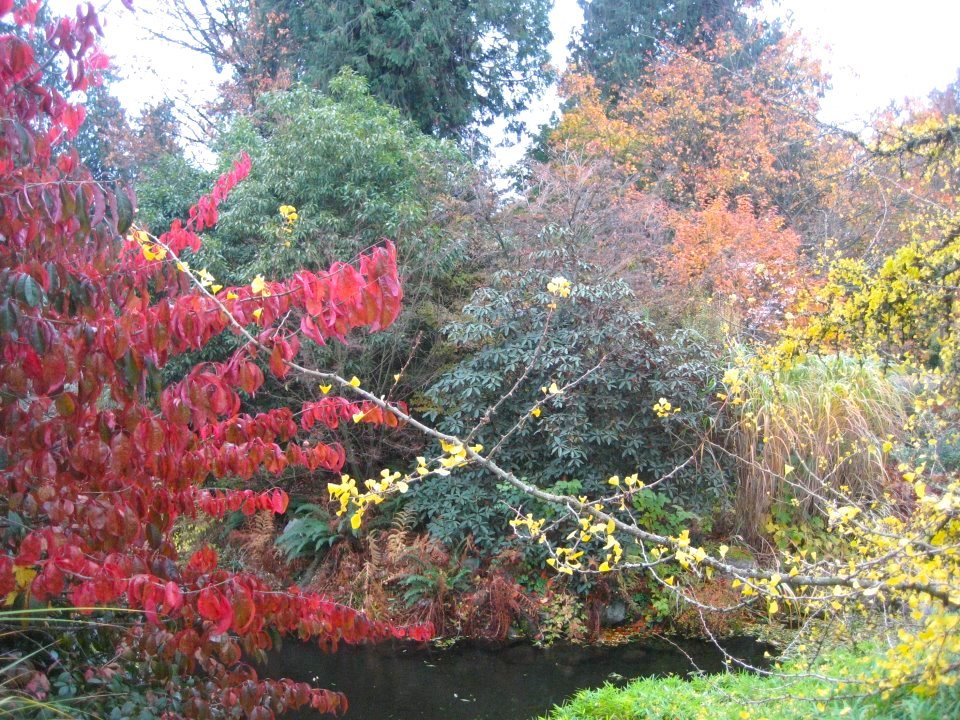 On the University of British Columbia campus, the UBC Botanical Garden is a riot of colour and textured barks, berries, and foliage. The garden’s renowned Apple Festival runs the weekend of October 14 and15, with over 60 varieties of heritage, new, and “tried and true” varieties. 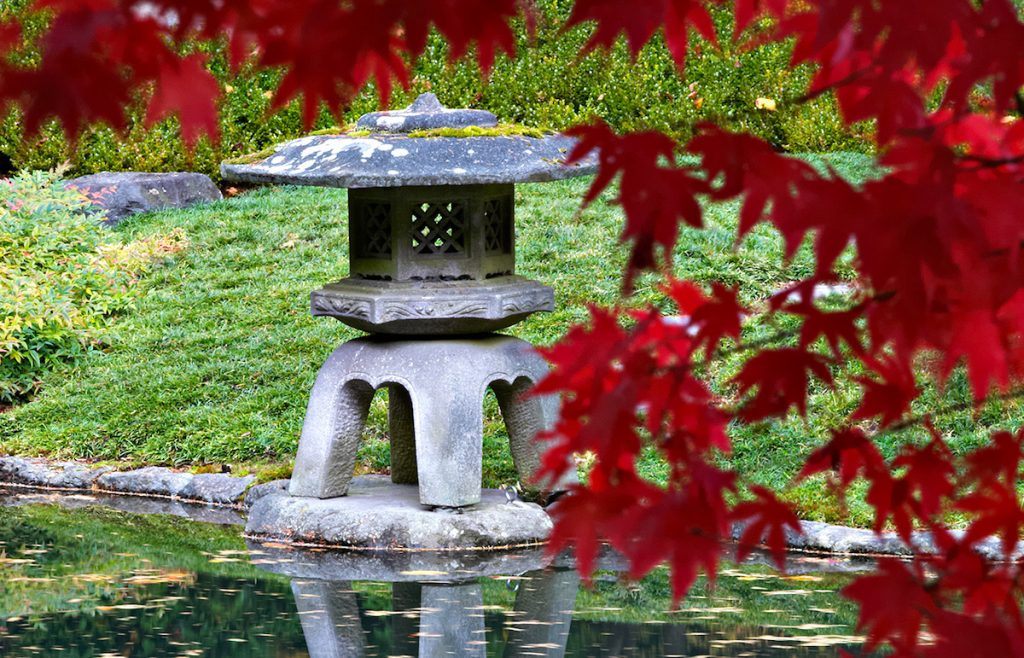 Also at UBC, Nitobe Memorial Garden is considered to be the one of the most authentic Japanese gardens in North America, and among the top five Japanese gardens outside of Japan. The Japanese maples will take your breath away in mid-October as they reflect on the main garden pond.