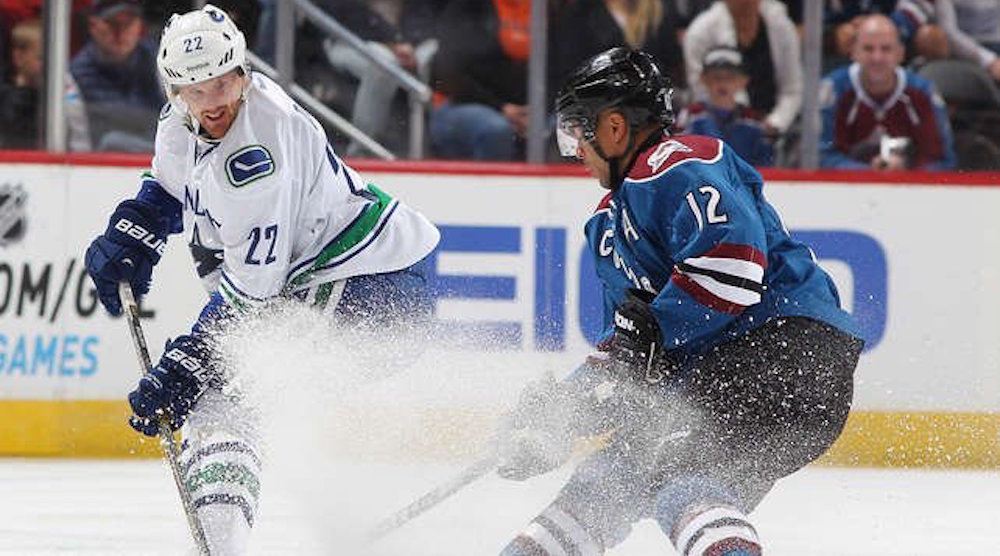 After a tough loss at the hands of the Chicago Blackhawks, the Vancouver Canucks are looking to head into the All-Star Break on the right note. The remaining two games for the Canucks against the Colorado Avalanche and Arizona Coyotes are what you might file under the heading “very winnable.”

First up? The Avs, AKA the NHL’s worst team, who are on pace for the worst point total (51) in an 82-game regular season since the 1999-2000 Atlanta Thrashers. Anytime you’re mentioned in the same breath as the Thrashers, you’re doing something wrong.

Edler says he feels good and will play tonight in Colorado. pic.twitter.com/MRXVK7xwpF

With Ryan Miller getting the call against the Arizona Coyotes tomorrow evening, Jacob Markstrom will start his 20th game of the season. Alex Edler didn’t practice on Tuesday, taking a “maintenance day,” but will play.

With some of the bad luck and miserable stretches endured by the Canucks this season, it’s hard to believe they’re still very much in the hunt for a wild card spot. In fact, with a win tonight, they would leapfrog Calgary and still have two games in hand on the Flames.

This may have something to do with it…

There’s a reason the Canucks have won more than they’ve lost recently and it has much to do with the goaltending of Ryan Miller and Jacob Markstrom. The Flyers 5-4 shootout loss aside, Canucks’ goalies haven’t allowed more than three goals in a game since before Christmas (the fourth Blackhawks goal was into an empty net.)

Markstrom gets the start tonight and in his last five games, stretching back to December 20, the lanky Swede has a record of 2-2-1. However, his underlying numbers tell a different story. On 176 shots in those games, he made 165 saves – good for a stingy .938 save percentage. He’s yet to post a shutout this season and tonight would be a perfect time for it.

Things couldn’t have gone much worse for the Colorado Avalanche this year. From their offence sputtering (2.02 goals per game) to not being able to keep the puck out of their own net (3.38 goals against per game), it’s been a season-long nightmare for a proud franchise.

Players such as Gabriel Landeskog (16 points in 35 games), Jarome Iginla (12 points in 45 games), and Carl Soderberg (10 points in 45 games) have been major disappointments. This is just part of the reason Joe Sakic has declared it open season on anyone not named Nathan MacKinnon, Mikko Rantanen, or prospect Tyson Jost. Popular targets include Matt Duchene and the aforementioned Landeskog.

The whole season has been a mess, but the last 18 games, in particular, have produced a paltry 2-15-1 record. The Avs’ last win was January 6th.

Fresh off a 5-2 shellacking from the San Jose Sharks – a game in which Patrick Marleau became the first player to score four goals in a period since Mario Lemieux in 1997 – this is Colorado’s final game before the All-Star Break.

If the Canucks can’t win this one, they should probably drop out of the playoff hunt and declare themselves a seller at the trade deadline. Well, you could argue they should do that anyway, but that’s beside the point…

Two points tonight would technically make them a wild card team! Canucks win 3-0 and the Avalanche continue to slide.