The Vancouver Canucks are back for Game 3 of the ridiculous five-game late-season series against the San Jose Sharks. This time, the two teams meet up in the bowels of the Shark Tank.

Yes this is the “series” that was supposed to determine if the Canucks could jump back into the playoff race in the Western Conference.

So much for that.

Thanks to a sadistic and unimaginative schedule maker, the Vancouver Canucks and San Jose Sharks are hooking up for their third tilt in less than a week.

Imagine if these games actually had playoff implications.

If not for Vancouver’s management and coaching staff finally coming around to the concept of a rebuild, the remaining games would be an exercise in tedium. Thankfully, we can watch these game with the expectation that the “kids” are finally going to get their shot. And over the last couple of games against San Jose, they haven’t been too bad at all.

The Sharks, of course, have assumed the role of Big Brother playing video games against Little Brother. They’ll keep Little Brother in the game for a bit to boost the kid’s confidence, but there is not way in hell they are going to lose in the end.

This helps to explain how the Canucks have lost their last two games against San Jose despite coming into the third period with a lead.

Betting on the Canucks holding a lead seems slightly over-ambitious at this point.

So what can we expect from “Game Three”? Probably a lot of the same.

The Vets, Brent Burns, Joe Pavelski, Joe Thornton and Patrick Marleau are going to do their thing. They always do.

If I wasn’t on Team Tank, I would be pretty defeated right now.

Linden: fun part of this journey will be watching players develop. About being patient. Can't do it through free agency or trade.

A good friend of mine used those words to describe watching the Calgary Flames last season (although it went much better than he could have imagined). The same goes for the Vancouver Canucks right now. Development is what the remaining fans are here to see.

The tough part about the remaining 19 games is that for the veterans, they are relatively meaningless. However, Vancouver has sworn (kinda…) to give the kids a shot and so far, that’s exactly what we are seeing.

Think of it like watching the Canucks in September. The games don’t mean much, but man is it fun watching the next generation give it their all. Even if you are cheering for the loss:

It took me 24 tries. Are the Canucks allowed to take that many mulligans? 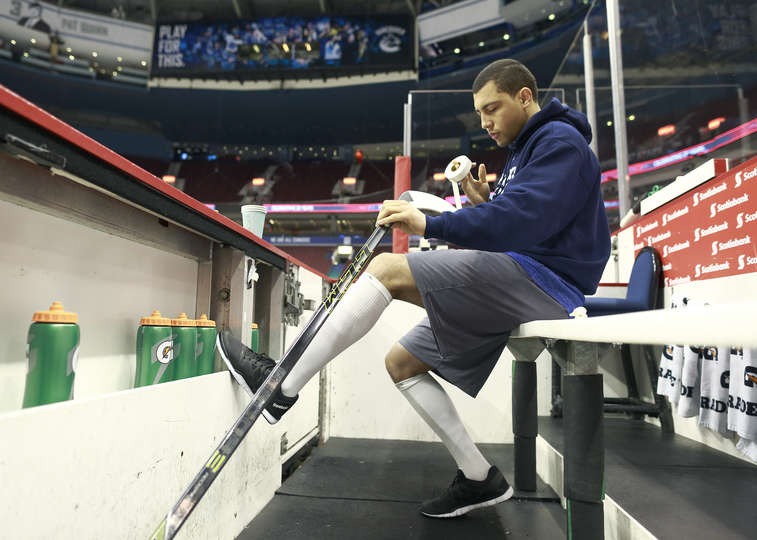 You can view the rotating (well, sort of rotating) winger on the Sedin line in a couple of different ways.

First, they are just trying to fill space until Jannik Hansen gets back from his injury. No one has to be spectacular, but they need to hold their own for a couple of games before Daniel and Henrik’s favourite linemate gets back.

Does a successful run with a young player make Jannik Hansen expendable? You know, like many people are lobbying for before he becomes a diminishing asset.

Jim Benning said as much Friday Morning at the Canuck’s Town Hall. From Omar’s breakdown of the event (READ IT!)

Benning later added: “We might make that move (trading Hansen) in the future. We couldn’t make that decision right now because we have too much uncertainty beneath him. When we can move up a player beneath him we can make those decisions.”

So far, we have seen Emerson Etem play with the Twins and it’s been pretty damn good. You can see a lot of similarities between Etem and Hansen in the sense that Etem has been tenacious on the forecheck and seems to be getting to the right areas.

Putting the puck in the net is a different story, but at least he knows where to go for the most part. Develop some consistency and we could have something here. Has it been as successful as Hansen? Of course not, but you could see some potential there.

With Jake Virtanen looking good on a line with Markus Granlund and Sven Baertschi, Jake’s audition might be on hold for a little while, and there is nothing wrong with that. Sometimes chemistry doesn’t happen over the course of a few games. Give Emerson Etem some more time on the first line and who knows?

Maybe the Canucks can parlay Hansen into one of those coveted third round picks.

Another thing to look forward to is how the defence performs over this last 19 games. And really, it can’t get any worse.

But with the way Jim Benning has been talking about his prospects in terms of next season, it seems there are going to be some tough decisions considering it sounds like he has already given three of the positions next year.

Pedan will be on the team next year – Benning

Well yeah, he requires waivers. So I would hope do#Canucks

Benning said he believes “defensive defencemen are going by the wayside,” and the evolution of hockey benefits Larsen’s style of game. He also said the KHL is a hard league to score in because of the larger ice surface.

“I’m not making this comparison but we’ve seen that Panarin played in the KHL and he’s having an excellent season here.”

And of course, Nikita Tryamkin:

Ferraro: Could see Tryamkin being in your top 4. He isn't a novelty act.

Ferraro is pretty on the ball. This excites me.

So if you assume those three on are the roster, plus Edler, Hutton, Tanev, Biega, Sbisa and maaaayyyyybe Dan Hamhuis, then there is going to be some good competition going down the stretch.

Plus Matt Bartkowski doing not great things. We still have to watch that unfortunately.

The Canucks will be sticking with the same forwards and defencemen as last game. Jacob Markstrom will get the start in goal.

As you have probably already determined, my hopes aren’t high for this one.

For the last few months, the Sharks have been tearing it up and I can’t imagine they are wanting to slow down anytime soon. Thanks to a couple of third period comebacks over the past weeks against the Canucks, San Jose has gained the psychological advantage.

The only thing working against the Sharks is their home record which is an unexplainable 12-13-3. Apparently the Canucks aren’t the only team with issues playing against their fans. Maybe it’s because the fans don’t know what’s going on?

However, my prediction is the Sharks pull it together in front of their “uneducated” fans and win by a score of 4-2. No third period comeback this time.