The good news: the Canucks scored a goal. Make that two of them in their 3-2 shootout loss to the Nashville Predators last night.

The bad news: the Canucks gave up a two-goal lead in the third period and lost another game they could have won.

Or is that good news? Especially for those of you on Team Tank.

No rest for the weary as the Canucks travel to St. Louis to take on the Blues tonight.

These two teams met just six days ago in Vancouver, where the Blues skated away with an easy 3-0 victory.

Ryan Miller was forced to make 47 saves to keep the game relatively close and Daniel Sedin put the team on blast, questioning their effort level.

The Blues sit in second place in the ultra-competitive Central Division: they are two points back of Dallas (with a game in hand) and four points ahead of Chicago. Needless to say, they will be hungry for a win.

Brian Elliott is riding a two-game shutout streak, including the game in Vancouver last week, and should get the start again tonight.

1. Try-ing Nikita on for size

Russian rookie Nikita Tryamkin has been quite impressive in his first five games as a Canuck. He is not a liability while on the ice (he’s a -1) and he’s seen his ice time rise from 11:33 in his debut to between 20 and 21 minutes in his last three games.

He’s able to thwart off defenders with his massive reach and he’s not afraid to be physical. It also helps when you’re 6’8″ and 228 pounds!

His good hockey sense helps him make smart plays especially when he gets beat off the rush. And his penalty-killing shift that ended to end overtime will quickly become legend here in Vancouver.

Tryamkin has been a great story for a team desperately looking for great stories. His arrival has been fascinating to watch. At first many fans were trumpeting him as a saviour even before he had played an NHL shift. Then came the worry that he’d bolt back to Russia next season instead of reporting to Utica if assigned there.

If his first five games are any indication, he’s a good bet to start next season with the big club.

Daniel Sedin: “From some guys right now, the effort is not there. I think those guys know who they are. I think it’s embarrassing.”

While it’s easy to notice a player’s effort when he has the puck, a more telling sign of his effort is how he back-checks and plays without the puck. And in looking at the two Nashville regulation goals from last night, you can see what Daniel is talking about.

On the first Predators goal by James Neal, you see both Bo Horvat and Jake Virtanen skating rather aimlessly into the slot without picking up a man or seemingly aware of the inevitable centering pass.

But it pales in comparison to this one:

Watch the way both Emerson Etem and Linden Vey drift back into the slot without really committing to anything or anyone.

In fact, it’s eerily similar to their effort on a Blues goal from last week:

Over these last weeks of the season, the Canucks’ younger players are all auditioning for spots on next year’s roster. It’s time for them to step their game up.

The Winnipeg Jets won last night and thus leap-frogged the Canucks in the standings. The Canucks now sit 28th overall. 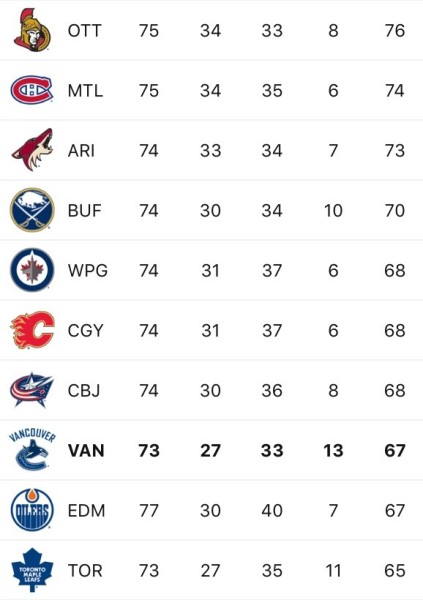 The Canucks can conceivably finish anywhere between 24th and 30th given how tight the standings are at the bottom of the league. For those desiring the highest draft pick (and lottery odds) possible, they are now cheering for the Oilers and Maple Leafs to win and the Canucks to lose.

If the Canucks lose in regulation time tonight, they’ll be mathematically eliminated from the playoffs.

Given the Canucks’ decent effort last night, I’d be surprised if we see many lineup changes except for Jacob Markstrom replacing Ryan Miller in net.

Dorsett in, McCann out (he'll get back in SUN vs CHI). Pedan in, Biega out. Grenier back to Utica. #Canucks

And did I mention that the Blues are well-rested?