The Canucks return to Rogers Arena tonight for an Hockey Night in Canada encounter against the powerful St. Louis Blues.

Vancouver lost 2-0 last night to the hapless Edmonton Oilers in a game that can only be described as a proxy for an effective sedative.

The Blues have moved into elite territory this year within the ranks of the NHL. St. Louis’ 41-22-9 record is good for a tie for 3rd best in the league, but this season will not be considered a success if they cannot make any noise in the playoffs.

St. Louis actually lost their last two games on the road against Calgary and Edmonton, but haven’t played since Wednesday, so they’re well rested. Expect Ken Hitchcock to have his men ready to play on Saturday.

The Blues are led offensively by flashy Russian Vladimir Tarasenko and Alex Steen. Jake Allen has settled in as the Blues’ #1 goaltender, but there always seems to be uncertainty in the St. Louis crease. 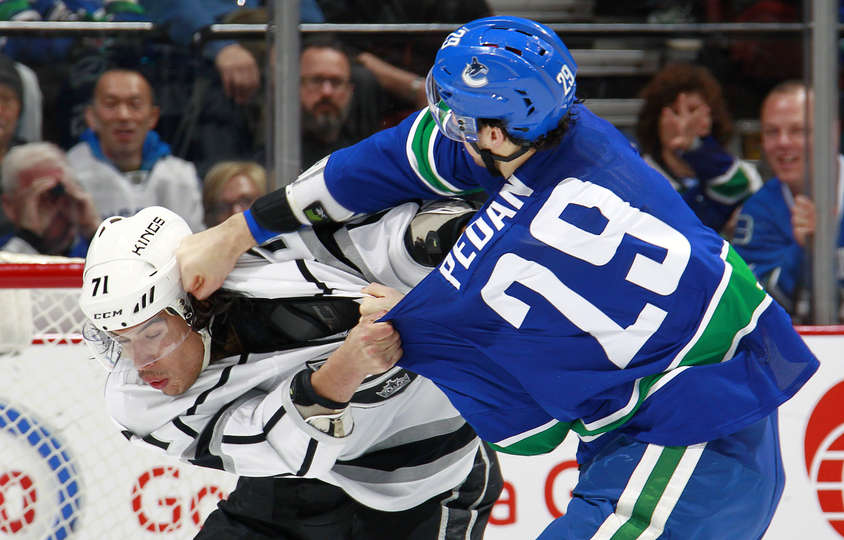 It is a little surprising that more isn’t made of the trade that landed Andrey Pedan in Vancouver. On November 25, 2015 the Canucks sent Alexandre Mallet (who is currently playing in the ECHL) and a 3rd round pick in the 2015 NHL Draft to the New York Islanders for the 6’5″, 215lb defenceman.

Pedan is back up with the Canucks after posting a solid 2015-16 campaign with the Utica Comets and is very likely to stick as a regular in the Canucks lineup next year. Not unlike Nikita Tryamkin, Pedan is a big body with above average skating ability and clearly a player to watch going forward.

Demko and Boeser playing so well this year that if they don't become Cory Schneider & Zach Parise, I'll be a little disappointed

So you thought Nikita Tryamkin had some high expectations placed upon him before playing a game in the NHL? Rob takes it to the next level.

This week, Brock Boeser was named the NCHC Rookie of the Year while Thatcher Demko took home Hockey East Player of the Year honours.

Promising prospects do not always translate into bonafide NHL stars, but early returns on Jim Benning’s 1st two years at the draft are encouraging.

3. Running out the string

Vancouver will be doing the tank dance tonight pic.twitter.com/QW4kIA26u6

The Canucks have 12 games remaining in a season that has marked the beginning of a youth movement in Vancouver. There is little doubt that it is just as hard for the players to get up for these last few games as it is for the fans that watch them.

While the Canucks are likely to lose more than they win down the stretch, the young players are gaining valuable NHL experience.

For the fans it is all about scoreboard watching and looking for the odd glimmer of hope to the future.

In case you didn’t notice, last night Edmonton and the Buffalo Sabres won while the Calgary Flames gained a point in a 4-3 shootout loss to the Colorado Avalanche.

There is always a silver lining!

Ryan Miller will get his turn in net against the Blues tonight. Look for the lineup to be the same as the one we saw last night in Edmonton.

**BREAKING NEWS** Radim Vrbata is out with a lower body injury and Chris Tanev is a game time decision. The Canucks have recalled Chris Higgins from Utica.

The Canucks are playing the second of back-to-backs against one of the best teams in the NHL. Need I say more?

The Blues take this on 4-2 and Canucks fans watch with one eye firmly planted on the out of town scoreboard.