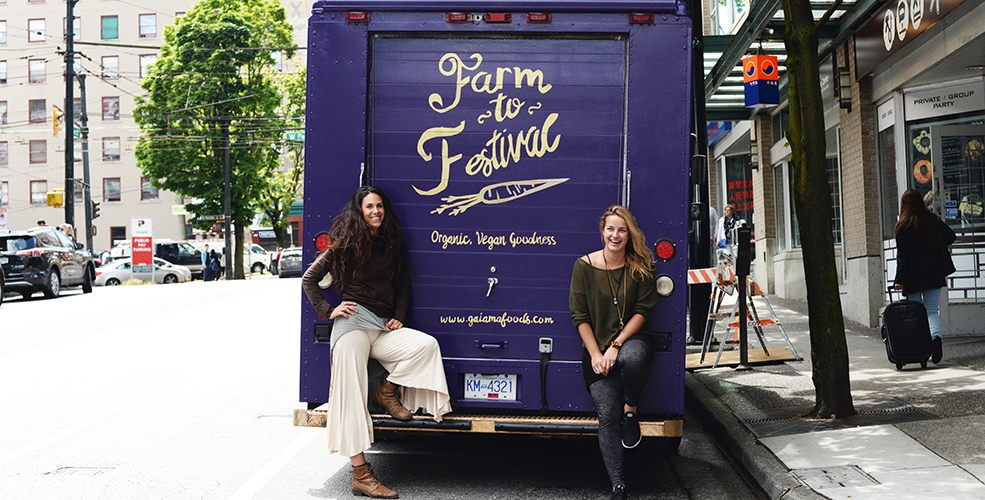 For many summer music festival devotees, what foods are being sold at the event site are key. While you’re likely to burn off the calories from tacos, fries, and ice cream dancing wildly to your favourite band (not to mention hoofing it through the venue) your body may not thank you for what you ate.

This summer, several of BC’s festivals have welcomed a new Vancouver-based food truck into the fold. Gaia Ma, and its founders, longtime friends Chloe Devine and Deva Waring, have hit the road in the province to serve up farm-fresh vegan fare. 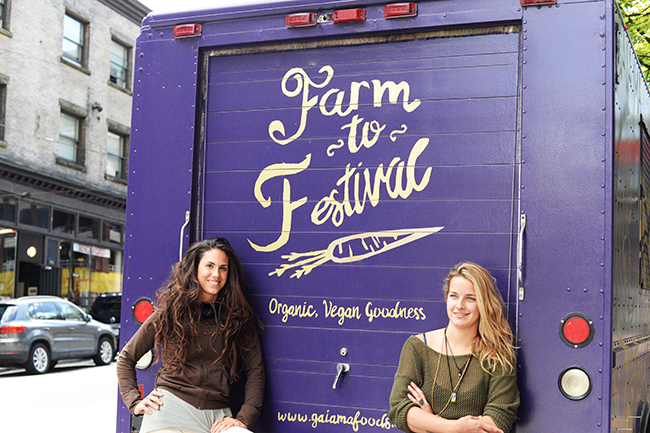 Seeking to fill the void in the usual festival food lineup, Devine and Waring have come up with a way to give people affordable fresh food that’s mindful of dietary restrictions, and that promotes sustainable, local eating.

The duo, who met each other as youngsters growing up in North Vancouver, have been working on the Gaia Ma truck and business plan since late 2015, when they both felt a calling to turn their passion for healthy eating and festival-going into a legitimate business. “The story sort of wrote itself,” jokes Devine of how the pair evolved their professional lives in early 2016 to make way for Gaia Ma.

What it came down to was that they wanted to be part of the change they sought. And so Gaia Ma came to be. The name came to be from the pairing of Gaia (“Goddess of the Earth”) and Ma (“Mother of the Universe”). Pretty perfect for this pair of earth-loving, nurturing women.

From the get-go, Devine and Waring wanted to spend Gaia Ma’s first season working the festival circuit in order for them to get their feet wet in the food truck biz. Booked at popular events like June’s Revival Festival in Squamish, and July’s Pemberton Music Festival, among others, Devine and Waring developed a terse menu of globally-inspired and mostly raw fare, and sourced ingredients from the surrounding communities of each venue. 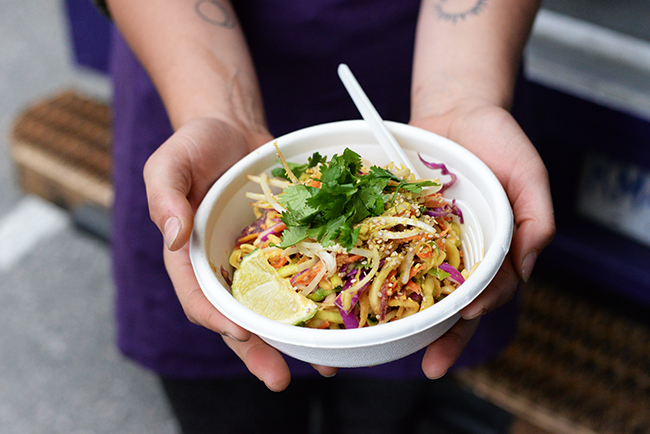 “It’s a lot more work for us, we cut out the middle man, we load up the truck with local fruits and vegetables,” Waring explains. To supplement what they’re culling from local farms, Gaia Ma has been using BC produce from Discovery Organics, too.

The result, however, is that they are able to instantly adapt to what foods are immediately available locally, and keep their prep simple. Their core menu consists of a few mains, including a Pad Thai, a raw lasagna, and a wrap; smoothies and smoothie bowls; and a couple of desserts, including a Chai Brownie, made with raw cacao. The only cooked item on the menu is Devine’s Kitchari–an Ayurvedic “mixed” dish that is often eaten as a nourishing cleanse.

Festival-goers this summer have been giving Gaia Ma a lot of positive feedback. Not only are their customers relieved to see a food option that is plant-based but they are also letting Devine and Waring know the food is satisfying and delicious. “It’s so much easier putting things that are fresh in your system,” observes Waring of the benefit of opting to eat plant-based foods at a festival. They’ve even had some celeb customers: “Die Antwood ate our food after their show!” exclaims Devine post-Pemberton.

Additionally, Gaia Ma offers customers the chance to order items that are readily identified on the menu as raw and/or gluten-free. For Devine, who says she’s been on a long health-focused journey to evolve her diet away from animal products, those customers will find they are welcomed at the Gaia Ma truck.

“When people ask for gluten free, there’s no judgment here. That’s your personal journey. I’m not going to give you a hard time as a service industry person,” explains Devine, noting that in her own quest to eliminate some foods from her diet she’s encountered servers who have made the experience unpleasant.

“We want people to feel good about coming to us,” adds Devine. “We want them to feel comfortable asking questions,” chimes in Waring. While not all festival or truck set-ups allow for the women to talk at length with their customers, they are more than happy to field questions from customers on the line, particularly if it can help people understand more about where their food comes from.

Citing their farm sources on their menu board, as well as noting that all their vegan cheeses and sauces are made by them on-site, Gaia Ma is able to get out some messaging about food sources without saying a word. And, of course, the food itself is the message.

Still, neither of Gaia Ma’s founders want to be preachy, or prescriptive. Waring says her boyfriend is an omnivore who also happens to enjoy her vegan cooking. Devine admits her brother is both a carnivore and a chef, and that they don’t have any tension between their disparate eating and cooking styles. 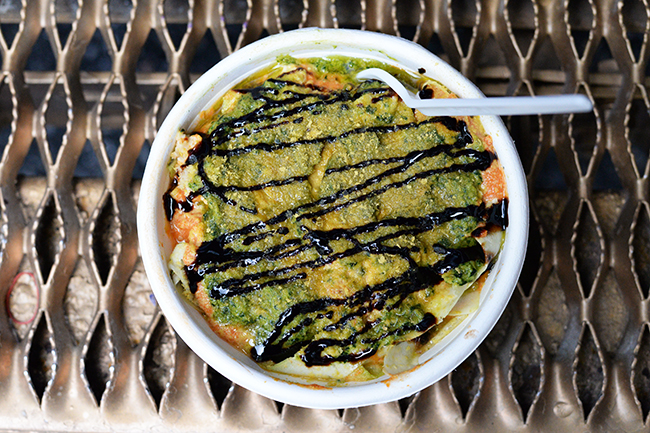 What it comes down to, says Devine, is that “what is on your plate matters. It’s not ‘be vegan,’ it’s not ‘eat raw,’ it’s that what you put in your body matters.”

And since what ends up on our plates often starts with a seed, for Devine and Waring, Gaia Ma the truck is a way to get to their ultimate goal of having a farm, and being able to harvest directly from their own resources to supply the truck. (Speaking of seeds, it’s worth noting the Gaia Ma business card is made on seeded paper; copy the number into your smartphone, stick the card back into the earth, and grow some flowers.)

As summer transitions into fall, Devine and Waring say they will be focused on taking care of themselves and taking a break from the weeks of long days, travel, and food truck life–not to mention the gruelling task they took on of painting their own truck Waring, who is a massage therapist, and Devine, who is a yoga instructor, are eager to take a little time off.

Still, Devine and Waring hope to grow Gaia Ma into much more for its second year. “We’ll come back next year bigger and better,” promises Devine. 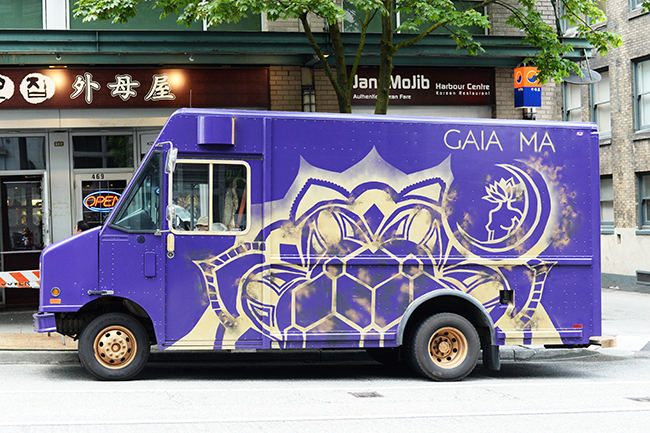