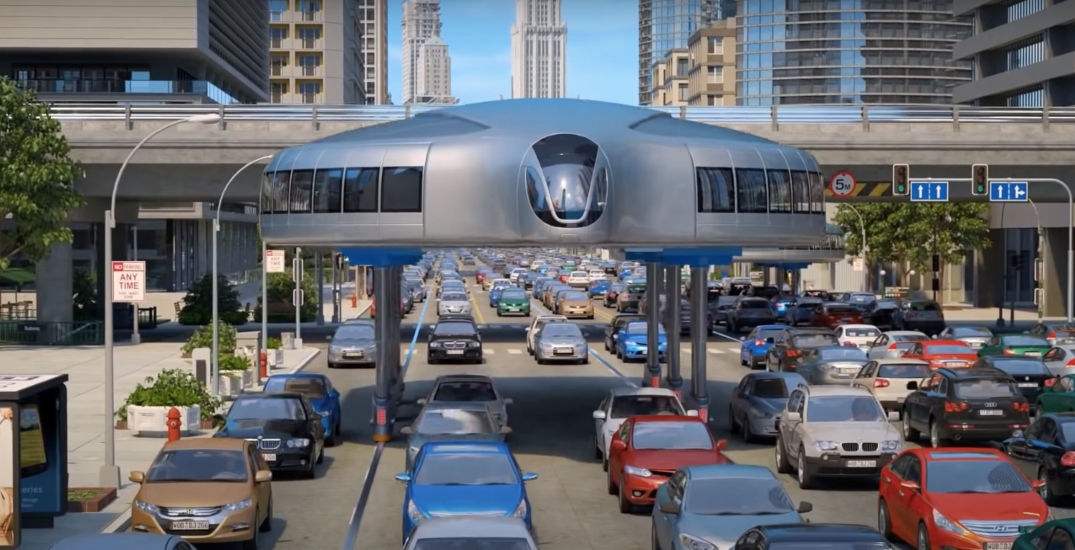 Traffic in major urban areas will continue to be a problem for the foreseeable future until some inventor thinks outside of the box.

This viral concept is NOT the solution.

Twitter user @TheFigen shared a now-viral rendering of the proposed solution to traffic: giant circular trains that would coast over urban vehicular congestion.

The design is actually courtesy of Turkish engineering firm Dahir Insaat and Russian inventor Dahir Kurmanbievich Semenov. The futuristic plan was conceived in 2018 and proposes using a gyroscope vehicle to vault over traffic.

The “gyrotrains” concept dream up using massive disc-shaped buses that balance on narrow legs, cruising between traffic lanes. Designed with towering gyroscopes, the vehicles would maintain their balance while hovering over cars and pedestrians beneath them.

The train’s stilts are also adjustable and stabilized into the ground, allowing them to slip under overpasses. They are designed with solar panels to continue the tops of the disc to continually spin, mainlining its balance.

Near the end of the viral video, you can see the rendering’s proposed solution to accidents, with the gyrotrains comically skidding to a halt and releasing seemingly useless side cushions.

A solution to traffic needs to be realized. It’s just not this. In typical viral video fashion, the reactions have been thoroughly entertaining.

As of this writing, the video has already amassed over 13 million views.

Hmm. Interesting. But what if we…made it long and skinny to increase aerodynamics, made it modular so it could be bigger or smaller depending on demand, and made it lower to the ground so it was more stable?
Here’s a concept image of my proposed improvements. pic.twitter.com/TUPkAbHrXx

People researching the most obtuse and eldritch transportation methods in existence to avoid just building a train pic.twitter.com/B3XPLHLD5t

Is there no gravity in the future?

One of the most stupid designs ever seen.

One of the most stupid designs ever seen.

This is just a worse train

I think this is fake guys. If you look closely it’s cgi

You’re gonna shit when you hear about trains

An extended view of the wild design can be found below, in case any investors want to bring the gyrotrains to fruition.