In late 2014, we had the distinct pleasure of spending five days in the beautiful city of Auckland, New Zealand, having been invited by Auckland Council to share some lessons from Vancouver’s implementation of an AAA (all ages and abilities) bike network.

Despite repeated warnings about Auckland’s reputation as a ‘City of Cars’ (with one of the highest rates of car ownership in the world), we left impressed at how comfortable they made the act of moving by foot in the city centre, so much that we were inspired to assemble a photo essay on the subject, entitled 12 Simple Ways Auckland Gets Walking Right. 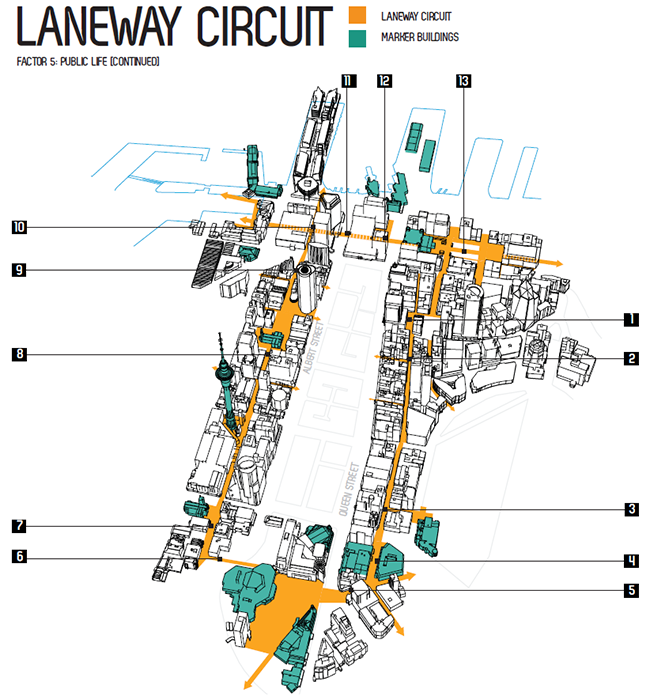 Central to Auckland’s walkable city strategy was a single document: the 2012 City Centre Masterplan, “a 20-year vision that sets the future of the city centre as the cultural, civic, retail and economic heart of the city.” Among a number of bold recommendations, the plan called for the establishment of a network of east-west and north-south walking routes linking Aotea Square (their central public space) to Britomart Transport Centre (their transit hub). These routes would be fully-pedestrianized where practical, but where automobile access is needed for loading and unloading, a shared space model would be implemented. 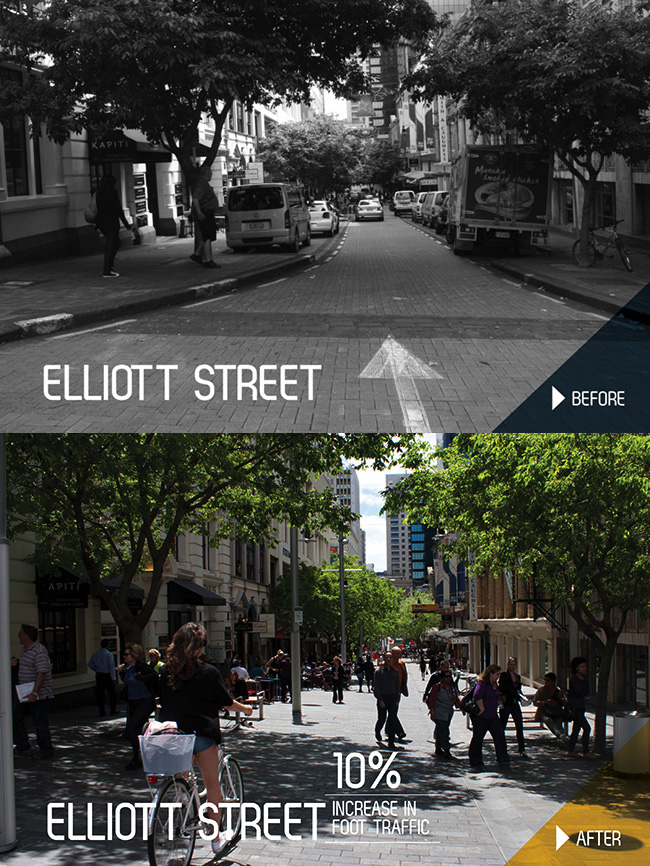 Simply put, a shared space is a corridor that prioritizes pedestrian travel by reducing the speed limit to 10 km/hr, and removing or minimizing all conventional street elements such as curbs, signs, traffic lights, and road markings. The concept dates back to the first woonerfs (or “living streets”) built in the Netherlands during the ’70s, but have since found prevalence across Europe – including a large swath of Vienna’s city centre. They are often seen as a more palatable step towards full pedestrianization – 10 or 15 years down the line – after the general public has been given time to digest the idea of a city with far fewer cars. 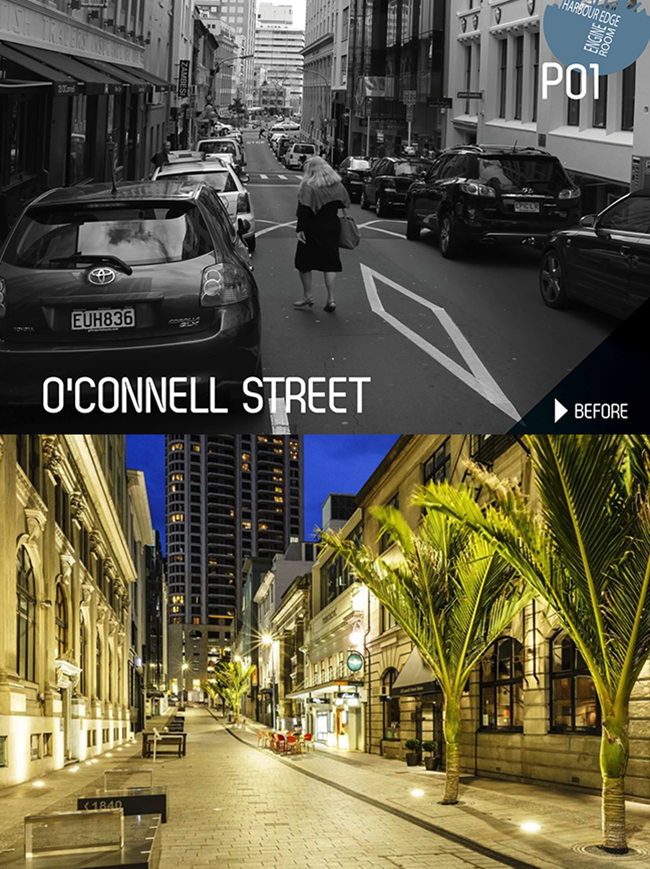 Under the masterplan, Auckland has built eight shared spaces to date, paid for by a small property tax for CBD businesses – over and above the current level of service – raising $20-million annually for such improvements. While the before-and-after photographs are dramatic, Auckland Council has also done a remarkable job tracking the specific metrics around these transformations, and they are truly remarkable. Not only are there fewer cars moving at slower speeds, but there are far more people travelling, stopping, and spending in the area, with Fort Street seeing a staggering 439% increase in hospitality spending. 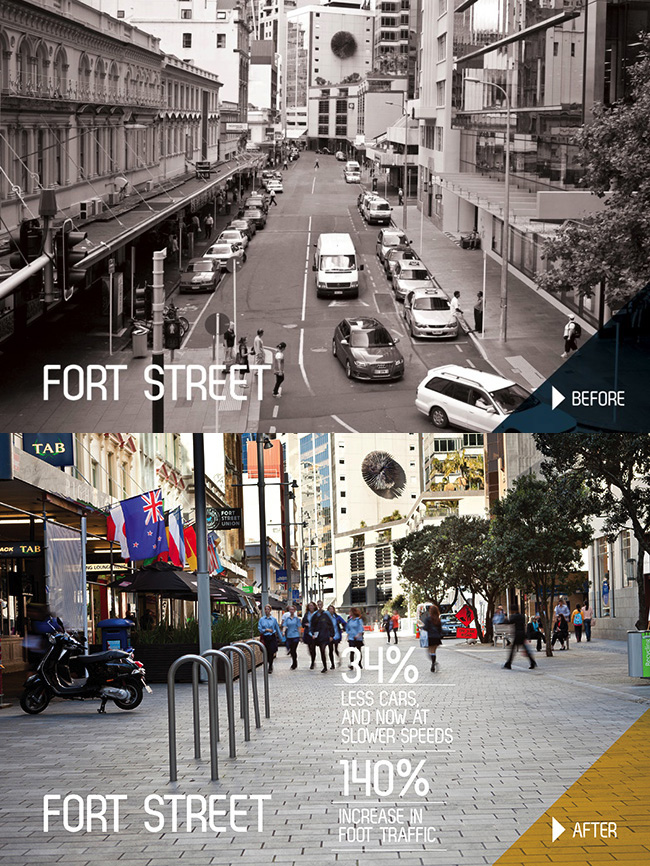 And so, with that in mind, we applied those lessons from Auckland, and selected five possible sites where the shared space model can, and almost certainly will succeed in Vancouver. 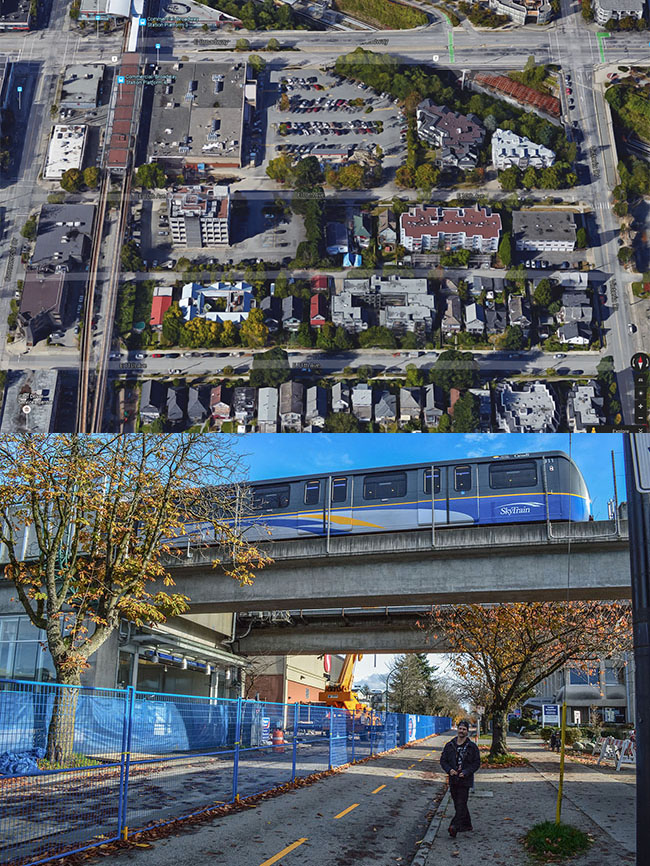 This short section of the 10th Avenue bikeway between Commercial and Victoria Drive is tailor-made for the shared space model. Existing traffic calming measures already limit the flow of cars, and the ongoing expansion of the Expo Line platform will lead to an increase in the number of people spilling out of the station. While full pedestrianization is ideal, a shared space maintains access to Safeway and medical buildings, as well as adjacent laneways. 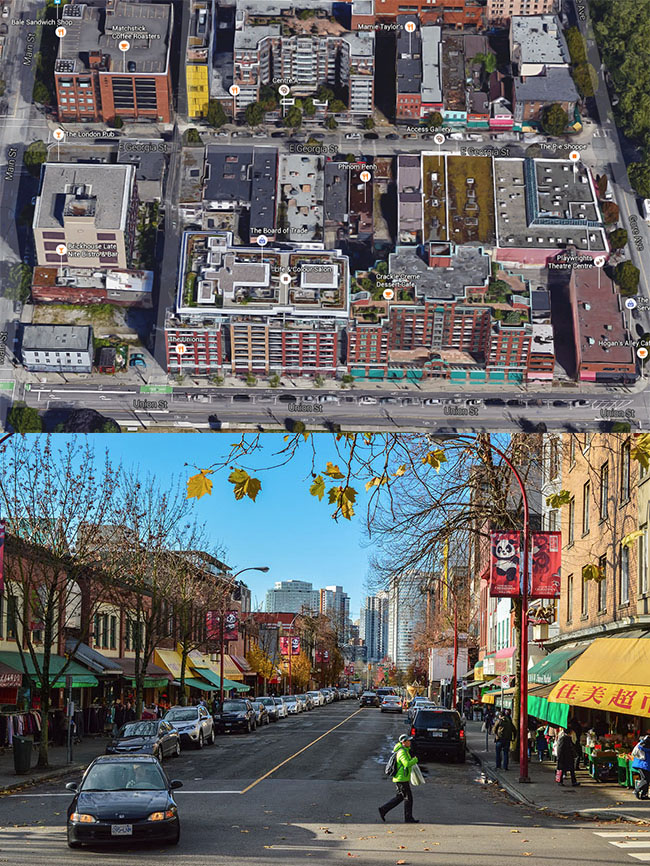 This naturally-calmed block of E. Georgia Street between Main Street and Gore Avenue is lined with the historic markets that have defined Chinatown for many generations. However, the sidewalks are dark, narrow, and incredibly cluttered, while the vast majority of the street is handed over to car movement and storage. A shared space would open up this street to all of its users, benefiting the small business owners (while allowing important deliveries), and improving safety for those on foot, many of whom are elderly with limited mobility. 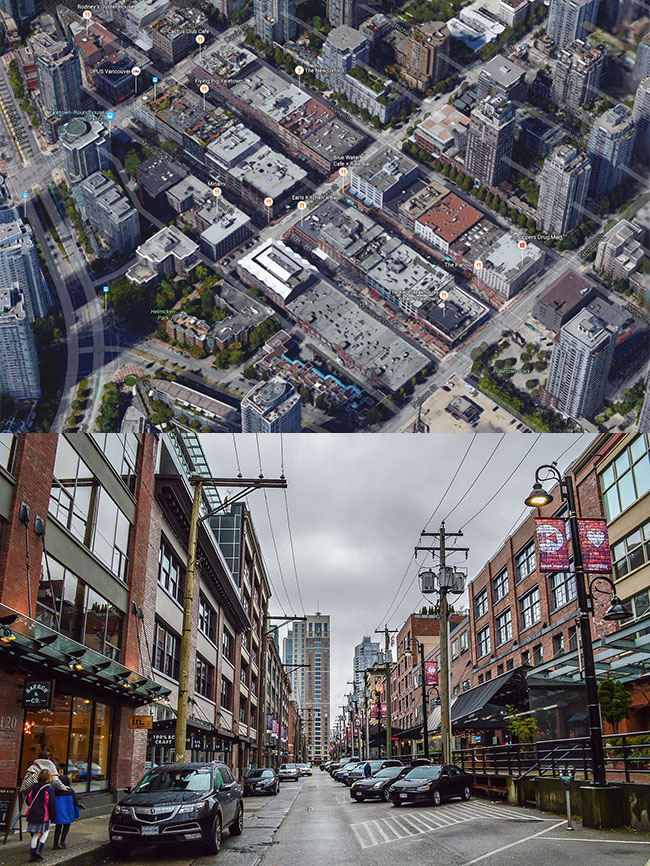 While a case could be made for shared space along either Hamilton or Mainland Streets (or perhaps both), we decided to focus on the former because of the distinct lack of through traffic. As it stands, Hamilton Street is essentially a parking lot, flanked by a narrow sidewalk that fails to do both merchants and customers justice. A shared space would serve as a functional and vibrant pedestrian thoroughfare from Roundhouse Station to Yaletown Park, as well as provide improved and increased patio space for neighbouring restaurants. 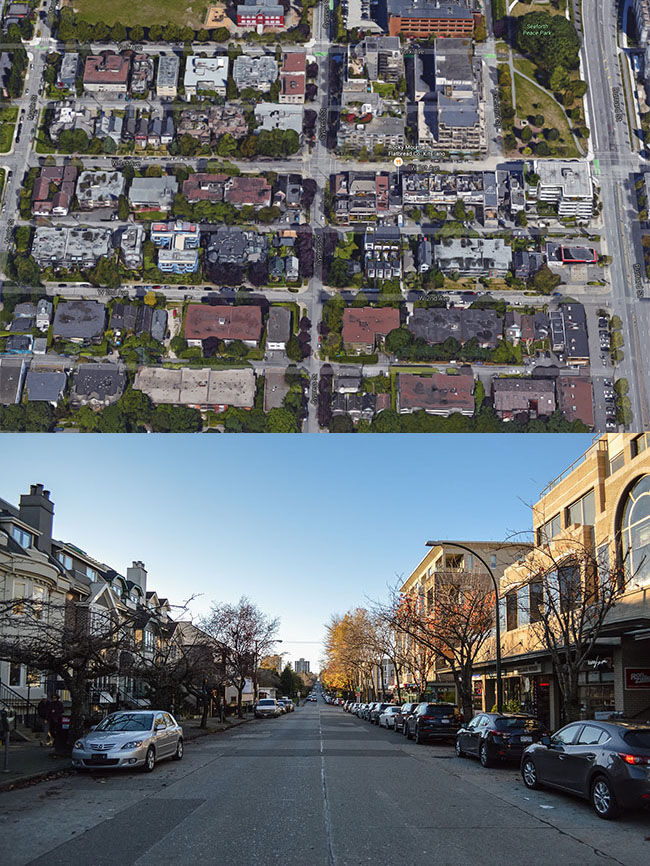 This stretch of W. 1st Avenue between Burrard and Maple Street is already a relatively successful mixed-use area, combining office, residential, retail and dining destinations. But it has a huge amount of potential just waiting to be unlocked. Further traffic calming, and a shared space model that expands the sidewalk into the street would allow for increased dining opportunities, make it even more desirable for potential employers and customers. 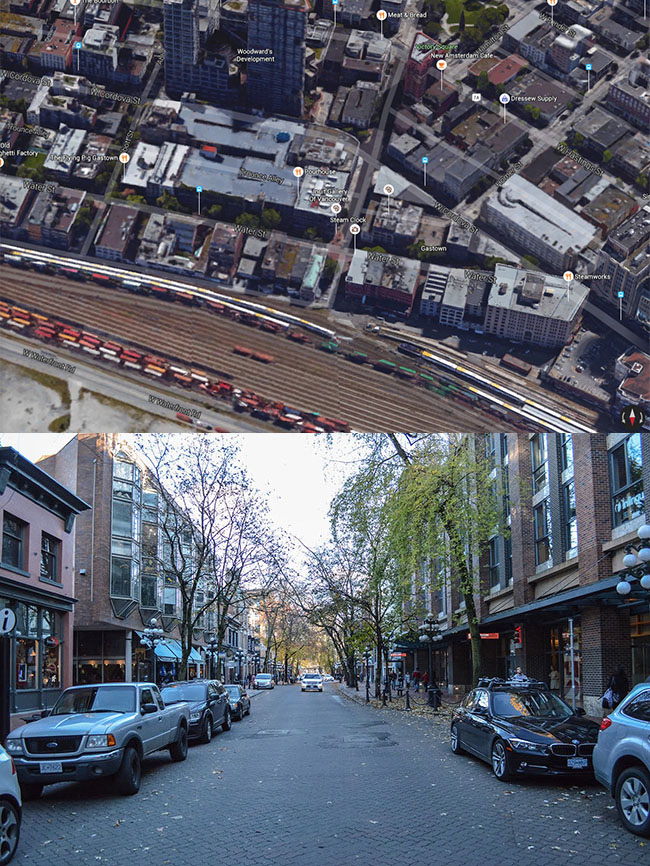 Finally, with Water Street due for a maintenance upgrade in the coming years, we must start a meaningful discussion about how to transform this already-successful place into the gem of Vancouver. While some have made the case for a pedestrian mall, adjacent parkade and laneway access is still needed, and we have an administration concerned about being portrayed as ‘anti-car’. A shared Water Street, if designed and implemented correctly, would be a resounding win-win-win for Vancouverites, tourists, and business owners alike.

These are by no means a comprehensive list, but are designed as a conversation starter. Have any suggestions for shared space sites? Leave them in the comments section!

Authors’ Note: Many thanks to our friend and colleague Darren Davis at Auckland Transport for generously providing his time and expertise in helping us write this post.