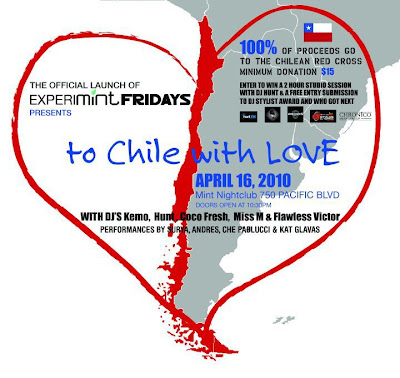 ExperiMint Friday’s in association with the Red Cross Presents : To Chile with love

Since the 8.8 magnitude earthquake that devastated the Maule Region of Chile and its surrounding areas on February 27, 2010, authorities estimate that more than 340 people have died and two million people have been affected. The Red Cross has launched an appeal for $7 million to support the relief efforts in Chile. Funds raised will be used to help provide aid relief for 15,000 families with goods, tents, tarpaulins and field hospitals, water and sanitation teams and logistics to support the country over the next six months.

Come have a few drinks and enjoy some of Vancouver’s most talented and amazing DJ’s a night full of great music and 100% of proceeds going to the Chilean Red Cross to help out as many families as we can.

Vanguards consist of Big Sype, hAZEL, Vago, Don Cristo and Fac. Respected beyond the genre of hip hop, Vanguards, went on to produce Kardinal Offishal’s double platinum selling lead off single ‘Dangerous’ featuring Akon from the album Not for Sale (2008, Konvict Muzik). ‘Dangerous’ was also on Billboard’s Top Five Hot 100 chart and one of the most performed songs for 2008.

DJ’ing was first a hobby for Coco Fresh. As she grew older she took the craft more seriously where she started DJ’ing assemblies, dances and private parties throughout high school. Through the party circuit Coco Fresh met DJ Kemo, Flipout and Jay Swing. As they took notice of her they also gave her pointers on scratching and how to excel with her DJing. DJ Coco Fresh’s guidance and influence comes from some of Canada’s finest DJs; Starting From Scratch, Baby Yu, Wristpect, Atrak and Kap N Kirk. Prior to all of this, Coco Fresh would stay in her room, crank the music loud and practice DJing on vinyl. Her ultimate goal is to bring great music to people around the world; therefore, eventually being a tour DJ.