Leading up to opening night of the BlackSpear Productions performance of Hamlet at the intimate Shop Theatre, I had reservations. I’ve been brought up on classical Shakespeare, watching the likes of Laurence Olivier, Kenneth Branagh, and even Mel Gibson perform the role of the brooding, melancholy and ultimately violent Prince of Denmark.

What could I possibly have to say about a gender-bending, off-the-wall performance in a very un-classic setting?

Turns out, quite a lot!

First, we all know the story, right? Prince Hamlet’s father King Hamlet, has died suddenly, and the young Prince is inconsolable and enraged by the fact that his mother Gertrude has swiftly married his uncle, the younger and dashing Claudius. And as if this weren’t bad enough, Hamlet is visited by his father’s ghost and is told that Claudius actually murdered him with snake venom poured into his ear while he slept.

Hamlet vows revenge – and his vengeance heaps tragedy on everyone he knows – including his best friend Laertes and Laertes’ fragile, innocent sister Ophelia. But that’s where the talented troupe, under the direction of Kaily and Sam Spear, takes this play off the rails. And it’s quite a ride.

First, throw away the notion that you’ll be transported to a foggy, dark and medieval Denmark – this starkly set play is very much in the present, complete with paparazzi, social media and smart phones. And the pivotal roles of Hamlet and Laertes, as well as many other roles, are all played by women. And in my opinion, these ladies rocked Elsinore Castle.

For me, there were a few elements that were central to the success of the performance. Libby Osler’s intense, very physical Hamlet is riveting, especially as she progresses into madness. Unlike many Hamlets I can recall, she moves constantly, running wildly around the stage in her agitated state, even throwing herself to the ground in a writhing lump of despair. She’s also pretty handy with a foil, as the fencing scene with Annette Reilly as Laertes will reveal. 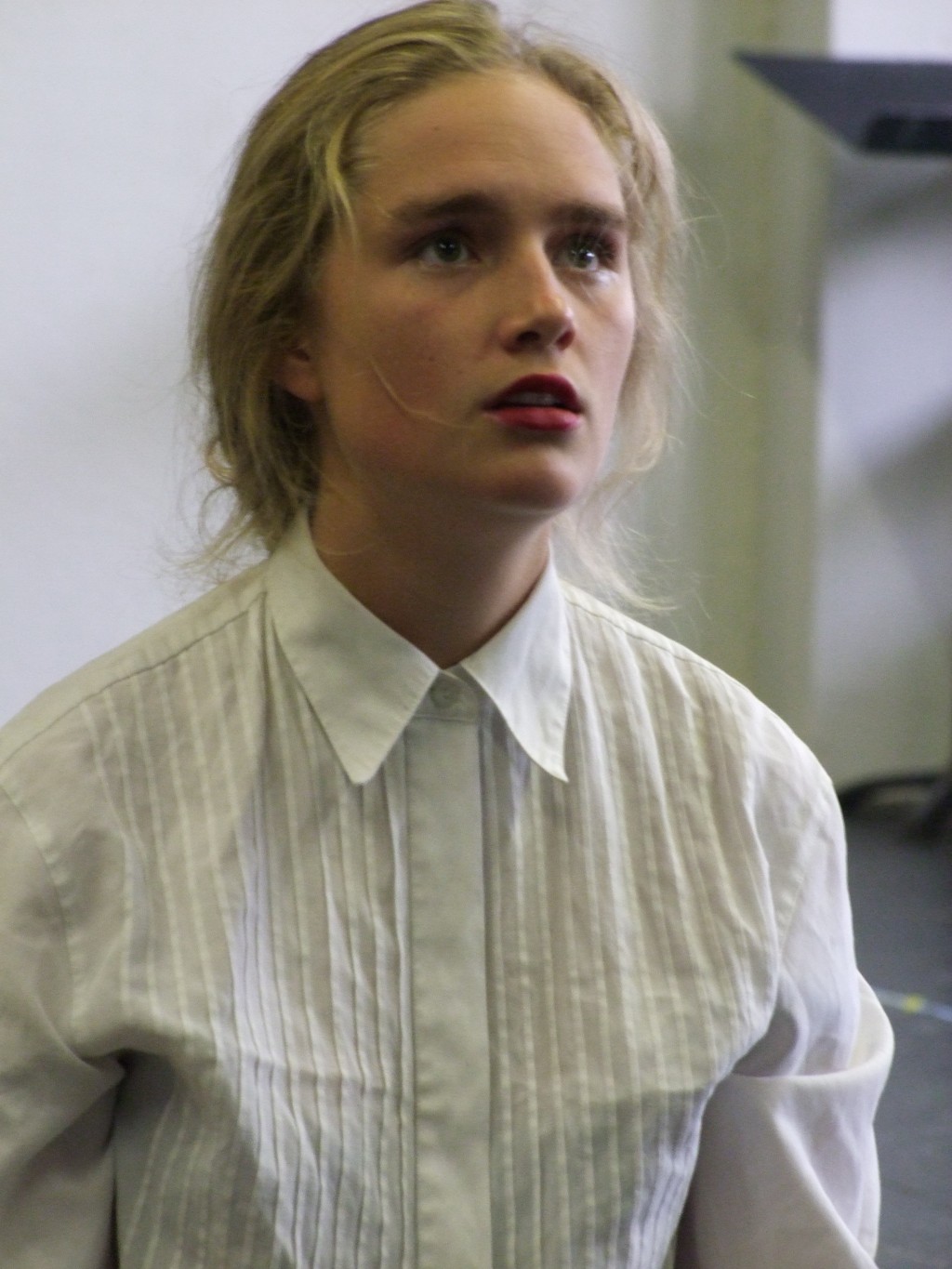 Reilly’s performance as the loyal friend whose love turns into hate after the death of Ophelia and father Polonius is conflicted, seething and surprisingly sexy. Though she wasn’t on stage as much as some of the other characters, she owned it when she did appear.

The other aspect of the play that held my attention and made me giggle out loud was the clever integration of the social media that rules our celebrity-obsessed world. As the play and Hamlet’s madness progresses, screen shots and video clips of news coverage, Facebook posts, tweets and Hello! Magazine articles capture every detail. I was surprised and amused at how well it worked. The sound track was at various times eerie, thunderous and very contemporary. It was fantastic.

Overall, my first gender-bending Hamlet was a great experience. My recommendation – GO! You can catch 7 pm performances Thursday November 6 through Sunday November 9.

Tickets can be purchased through Brown Paper Tickets or at The Shop Theatre, 125 E. 2nd Ave. Tickets are a steal at $20, but they at a premium, since the venue has limited seating.