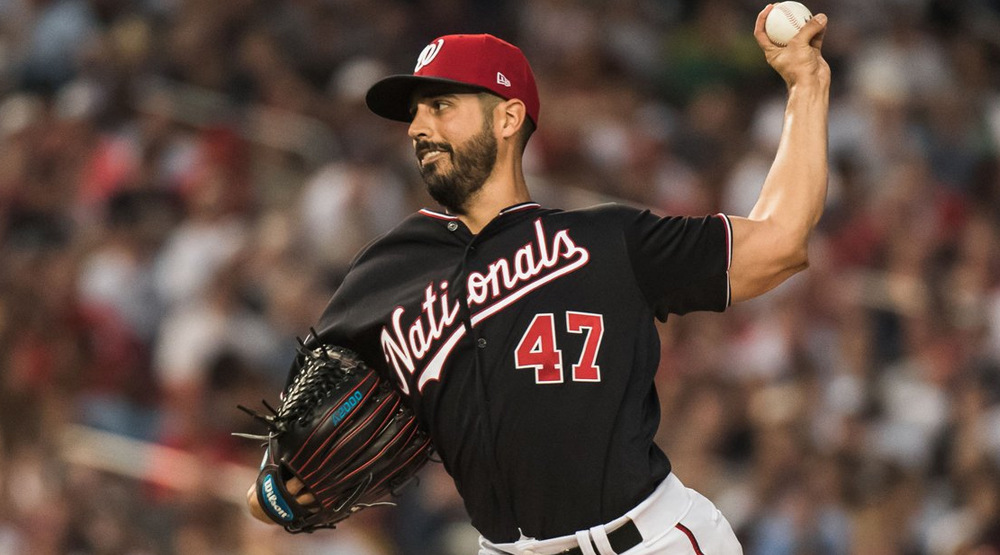 Not every team will make a trade this offseason, but they’ll all assuredly sign a free agent at some point.

With an unofficial rebuild underway in Toronto, the Jays won’t likely make any big splashes when MLB’s free agency period officially opens up this Saturday, but they still have to field a respectable team.

Starting pitching and bullpen help are two distinct needs for them next season, but adding an established utility infielder (or two) couldn’t hurt, either. Here are five free agent names who could help the Blue Jays in 2019.

There was once a time when Gio Gonzalez was among the best arms in the National League. Unfortunately, that time was six years ago, but the man has been incredibly consistent over the course of his 11-year big league career.

He’s made at least 27 starts every season for the past nine consecutive years and his 3.49 ERA over nearly the past decade is quite impressive. With a starting rotation full of question marks, Gonzalez is about a sure thing as the Jays will find on the free agent market.

Coming off a playoff run with the Brewers, the veteran lefty will be in high demand. A multi-year deal would be necessary to land Gonzalez and the Blue Jays would need to outbid at least a half-dozen teams shopping for starting pitching.

In comparison to his breakout campaign of 2017, Marwin Gonzalez experienced a down year with the Houston Astros. Even still, in 145 games with the AL West Champs, he posted respectable numbers across the board. Gonzalez’ real value lies in his versatility; he played every position for the Astros in 2018, save for catcher and centre field.

The Blue Jays already have a glut of infielders and a less polished version of Gonzalez in the form of Lourdes Gurriel, but Gonzalez’ seven years of experience and ability to play all over the diamond is a tremendous asset.

He would be a luxury on a team like the Jays who have ample bodies in the outfield and infield, but Gonzalez would be an upgrade for Toronto at the second base position (Devon Travis) and left field (Teoscar Hernandez).

The Tampa Bay Rays made headlines this past spring when they opted to use Sergio Romo as an “opener” to start a series of games. In total, Romo opened five games for the Rays in 2018.

The reason the Rays were able to do that was Romo’s numbers fared well against right-handed heavy lineups. Their starting rotation was also decimated by injuries, so they really had no choice but to deploy this inventive method to get eat up innings.

Even at 35, Romo’s still a talented right-handed reliever. His slider has been one of the best among relief pitchers and he signed with the Rays last year for a modest $2.5 million. The past two years, the Blue Jays filled out their bullpen by signing similar calibre relievers like Joe Smith, Tyler Clippard, John Axford, and Seunghwan Oh.

Romo has proven he can navigate the American League East. By bringing in this veteran right-hander on a one or two-year deal, he’d provide some stability for the back end of the Blue Jays bullpen.

The Arizona Diamondbacks signed Daniel Descalso for a bargain last winter, getting the veteran infielder for a mere $2 million. Split between first, second, and third base, Descalso was the Diamondbacks’ Swiss Army Knife all-purpose utility player this past season.

His skill set mirrors that of the aforementioned former Houston Astro in Gonzalez, but if the Blue Jays can’t land him, Descalso would be a nice fit on their roster in 2019.

Picking through the D-Backs leftovers again, Jake Diekman evolved into Arizona’s setup man in the second half of the season. He bounced back in 2018 after missing a significant portion of the 2017 season after undergoing surgery for colitis.

With Aaron Loup no longer part of the Jays organization, they’ll be looking to anoint a new top-tier left-hander in the bullpen. Diekman could not only fill that role, but he’s proven he can be more than just a LOOGY and can be trusted in high leverage late-game situations.