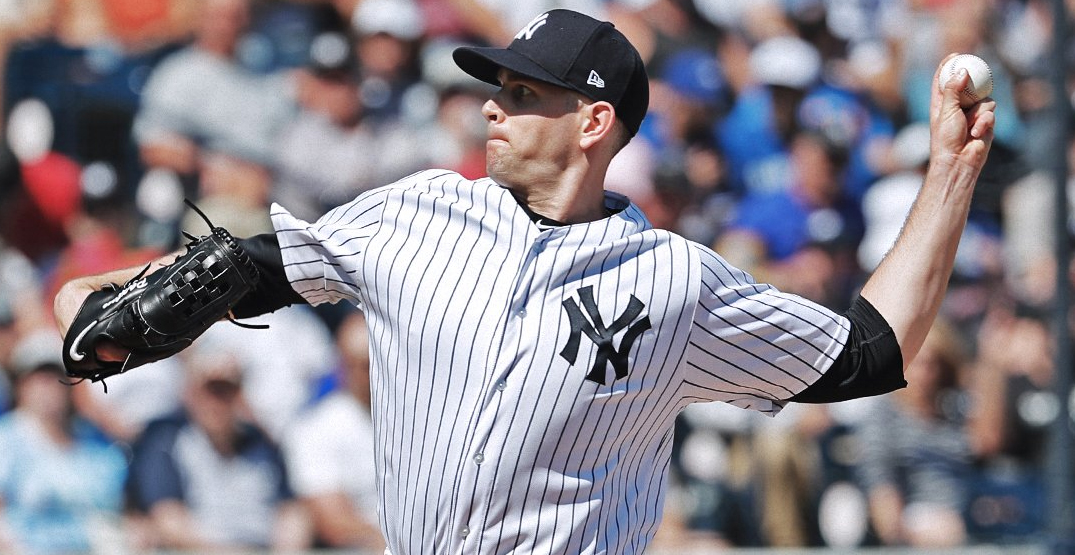 For the second consecutive winter, the number one priority at the top of the Toronto Blue Jays’ wish list is pitching, pitching, and more pitching.

The Blue Jays also lost a pair of relievers (Anthony Bass and Ken Giles), so the front office also has holes to fill in the bullpen. While there isn’t a ton of top-end talent in the free agent pool this offseason, there is a dearth of mid-to-lower tier pitchers available for the taking.

With plenty of room for improvement on their pitching staff and a modest payroll heading into the 2021 campaign, the Blue Jays could upgrade their roster by signing at least two (if not three) of these free agent pitchers.

Heading into the 2020 season, James Paxton poised himself for a big payday. But a debilitating forearm injury left Paxton on the shelf for the last month of the season.

At best, the Ladner, BC native might settle for a one-year pillow contract to re-establish his value and head back into free agency next year seeking a multi-year deal. In the meantime, despite the risk, it makes all the sense in the world for Big Maple to head home.

This is one rare instance where the Blue Jays have an advantage over 29 other teams, that they can offer Paxton the chance to play on home soil (at worst case, Buffalo).

He’s one year removed from his second-best full season as a starter, when he posted a 117 ERA+ with the Yankees in 29 starts with the Yankees. A modest one-year deal worth $10 million with a club option for a second year at $15 million gives Paxton and the Blue Jays some options beyond the 2021 season.

Walker provided the Blue Jays with a crucial shot of adrenaline they needed to squeak into the playoffs. Arguably, he was also the most valuable trade deadline acquisition of any team this past season.

The 28-year-old was very effective in the second half, pitching to a 1.37 ERA in six starts in a Blue Jays uniform. When the Blue Jays were running on fumes at the end of the season, Walker gave some much-needed stability to their starting rotation.

In doing so, the Blue Jays may have laid the groundwork to re-sign Walker on a multi-year contract. Interestingly enough, he’s the youngest free agent starting pitcher on the market this winter.

He’d be a worthwhile investment for the Blue Jays, given that he’s familiar to the team and the coaching staff. Armed with one of the best fastballs in baseball, Walker would be an ideal No. 2 in Toronto’s rotation behind Hyun-Jin Ryu.

Once viewed as the future ace of the Baltimore Orioles’ starting rotation, Kevin Gausman bounced around to three different teams since being traded from Baltimore to Atlanta at the 2018 trade deadline.

The 29-year-old had an incredible season with the San Francisco Giants in 2020 and was by far the best pitcher on their staff. His 1.5 fWAR is the third-highest of any free agent starting pitcher on the market this winter.

At 29 years old, Gausman is right in the wheelhouse of any team looking for some multi-year stability for a pitcher who has top-20 potential in the league. It will take a two-year or even a three-year deal to land him, but the Blue Jays can bolster their rotation by bringing Gausman back into the American League East.

Brad Hand was one of the best relievers in the American League in 2020, but for some reason, the Cleveland Indians declined his $10 million club option, and no teams put a claim on him, thus making the Reliever of the Year award finalist a free agent.

Given his pedigree as an elite reliever over the last five seasons, plenty of teams will gun for the former Indians closer in the coming weeks. His skill isn’t the question, the dilemma is whether teams will commit big money on a multi-year deal for a reliever.

After losing Ken Giles and Anthony Bass to free agency, the Blue Jays need help in the back-end of their bullpen. Whether it’s in the closer’s role or more of a setup role, Hand as a left-handed high-spin reliever would be a welcome addition to Toronto’s bullpen corps.

The Oakland A’s struck gold in 2018 when Blake Treinen came out of nowhere to become one of the best relievers in baseball. He earned an All-Star nod; he picked up Cy Young and MVP votes, and was dominant all year long.

After a rocky 2019 season, the Athletics cut ties with their former star closer last winter, then he signed with the Los Angeles Dodgers and went back to doing Treinen things again in 2020 (although, not as stellar as he was in 2018).

Even though the Blue Jays have their “closer of the future” in Canadian reliever Jordan Romano, they need all the help they can get in terms of high leverage relievers. Treinen is no stranger to pitching when the game’s on the line. Heck, he just pitched three games in the World Series with the Dodgers.