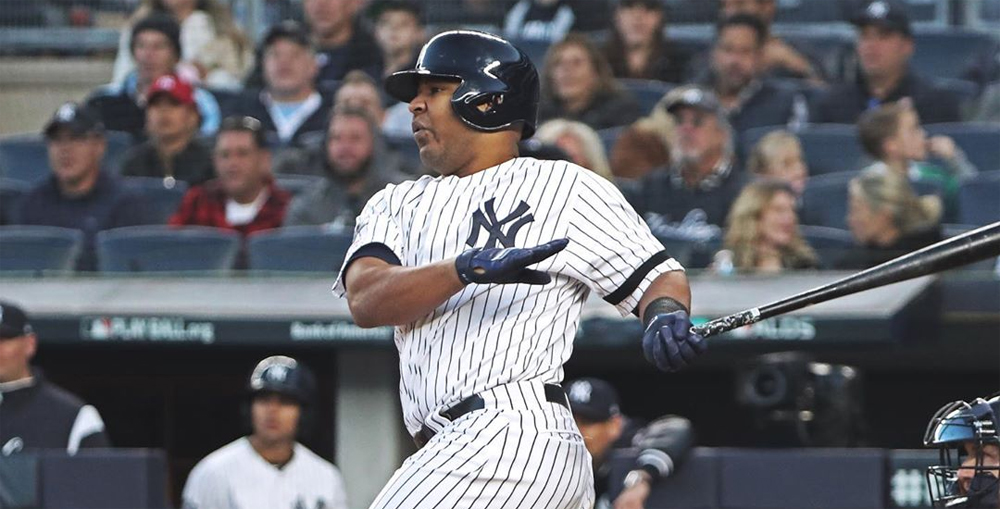 Pitching is the number one priority for the Toronto Blue Jays this offseason, but they still have plenty of holes to fill on their roster this winter.

With vacancies at first base and a crowded outfield picture, the Blue Jays use free agency to help firm up a few positions on the diamond. While the crop of free agent first basemen is rather thin, there is an abundance of outfielders available.

If any team can afford to sign a few free agents this offseason, it’s the Blue Jays. They have the least amount of money committed to active payroll in 2020, with an MLB-low $37 million on the books for active players.

From a few old friends to some players hitting free agency for the first time, these are five of the most attractive hitters on the market for the Blue Jays.

Old friend alert! Blue Jays fans remember Edwin Encarnacion all too well. His career took off in Toronto and he parlayed that into a three-year, $60 million contract with the Cleveland Indians in January 2017.

Encarnacion bounced from the Indians to the Mariners last offseason, and Seattle shipped him to the New York Yankees head of the 2019 trade deadline. The Yankees held a $20 million option on Encarnacion, which they declined on Thursday, making him a free agent.

A reunion with the Blue Jays makes all the sense in the world. They have a vacancy at first base, but more than likely, he slots in as a designated hitter for any American League team.

Given his age and defensive limitations, there are only a handful of teams who have the roster flexibility for a player like Encarnacion. That makes the Blue Jays a perfect fit for the 37-year-old.

Encarnacion wouldn’t help push the Blue Jays over the top in 2020, but even at his age, he still provides decent power numbers and could play a handful of games at first base in a pinch.

Looking at his peripheral numbers, 2019 was a down year for Corey Dickerson. Split between the Pittsburgh Pirates and Philadelphia Phillies, the 31-year-old was limited to just 78 games because of an early season shoulder injury.

Even though he only clubbed 12 home runs, his advanced metrics looked great; a 127 wRC+ and .320 wOBA paint a positive picture for the veteran outfielder.

The Blue Jays boast a pile of outfielders, but what they lack is true bonafide outfielders who can hit for power and play plus defence. Dickerson checks all those boxes and could add some sorely needed veteran experience to the outfield.

Old friend alert 2.0! There’s a segment of Blue Jays fans who might not even remember that Eric Thames was once a Toronto Blue Jay, but it’s true. He spent a season-and-a-half in a Blue Jays uniform before being traded to the Seattle Mariners in 2012.

Then, Thames struggled for a few seasons before elevating himself to superstar status in the Korea Baseball Organization and even won an MVP award while playing abroad for the NC Dinos for two seasons.

The 32-year-old played the bulk of his 149 games with the Brewers this past season at first base, but Thames can also play in the outfield. Ideally, he’s suited as a first baseman, but could also shift to designated hitter.

This is all conditional on the Brewers declining Thames’ $7.5 million option for the 2020 season. Even if they pick up that option, Thames would be an ideal trade target for the Blue Jays since he’s under control through the 2021 season.

Jose Abreu signed a six-year, $68 million deal out of Cuba with the Chicago White Sox way back in 2013. While the White Sox never developed into a contender over those six seasons, Abreu blossomed into one of the most consistent first basemen in baseball.

He’s flown under the radar playing with the underwhelming White Sox, but Abreu is still the real deal at first base. His 179 total home runs since 2014 are tied for the second-most among all first basemen.

His glove could use some work, but Abreu’s bat plays at the first base position. He’s never played fewer than 128 games in season, so he’s the model of consistency at his position.

Yet, as the biggest free agent first baseman on the market, Abreu’s services will be in high demand, meaning a team like the Blue Jays need to fork over a sizeable multi-year deal to secure Abreu.

Somewhere in the three-year, $50 million range seems appropriate for a first baseman of Abreu’s calibre.

Stop us if you’ve heard this one before; beleaguered player signs with the Rays and finds new life under the tutelage of Tampa Bay’s front office. Avisail Garcia bounced back in a big way in 2019, setting a new career high in home runs with 20 round-trippers.

At 29 years old, he’s one of the youngest free agent outfielders on the market. With eight years of big league experience, Garcia is more than capable of handling the bat.

He isn’t revered for his defence, but at the very least, Garcia isn’t a liability in the outfield, which is more than some Blue Jays outfielders can say for themselves. *cough* Teoscar Hernandez. *cough*