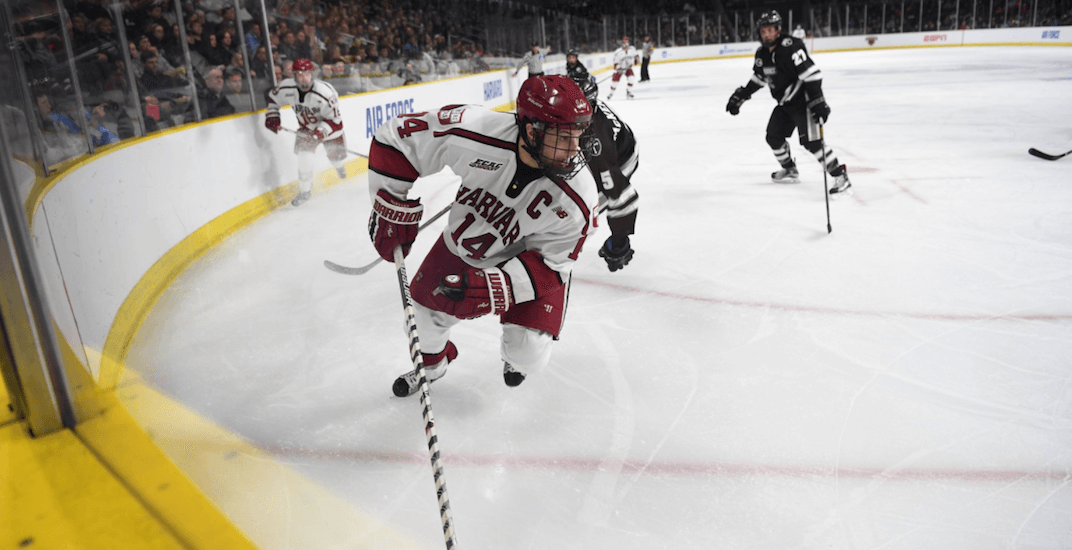 Alex Kerfoot is officially a free agent, and he’s testing the waters.

The 23-year-old West Vancouver native never signed a contract with the team that drafted him in 2012, the New Jersey Devils. The NHL’s collective bargaining agreement stipulates that players in Kerfoot’s situation – unsigned after completing four years of NCAA hockey – become unrestricted free agents on August 16.

That’s exactly what happened, and the Canucks are reportedly interested. Who can blame them?

The son of Vancouver Whitecaps owner Greg Kerfoot, Alex represents a ‘free’ prospect for the team that signs him. For the Canucks, he would be another good young player in an ever-improving prospect pool, which is exactly something that should appeal to a rebuilding team.

So the Canucks are interested, that’s no surprise. Now it’s up to Kerfoot to make a decision.

News 1130’s Rick Dhaliwal spoke with Kerfoot’s agent, who relayed the information that his client had a meeting with Canucks management.

That’s credible information from a credible source, and should absolutely be believed. But no, we are not backing off our original report.

Daily Hive reported on July 30 that Kerfoot would not be signing in Vancouver. Our writer that broke the story, Grady Sas, has multiple sources with direct knowledge of the situation. His sources told him that while the idea of playing in front of friends and family in Vancouver appealed to him, the logjam of centres penciled ahead of him on the Canucks would limit his chance of a prominent role with the team going forward.

As of this week, that information had not changed.

Kerfoot isn’t an 18-year-old kid coming out of junior. He’s 23 and he needs an opportunity to prove himself at the NHL level, and soon.

So why did Kerfoot meet with the Canucks? It could be for a myriad of reasons.

It’s a similar situation to Milan Lucic last year, who we reported was not likely to sign with the Canucks before he met with management in Vancouver.

Kerfoot is likely doing his due diligence at the off-chance that the Canucks can offer him something he’s not aware of. Perhaps his agent believes that meeting with Vancouver would help his bargaining power with another team. Maybe he’s just being polite.

Vancouver is not the only city that Kerfoot will visit. #Canucks

The free agent centre is reportedly going to meet with other teams. We believe he will choose one of them.

It’s important to note that Kerfoot is a human. He can change his mind.

If he does, we’ll report as soon as we know.