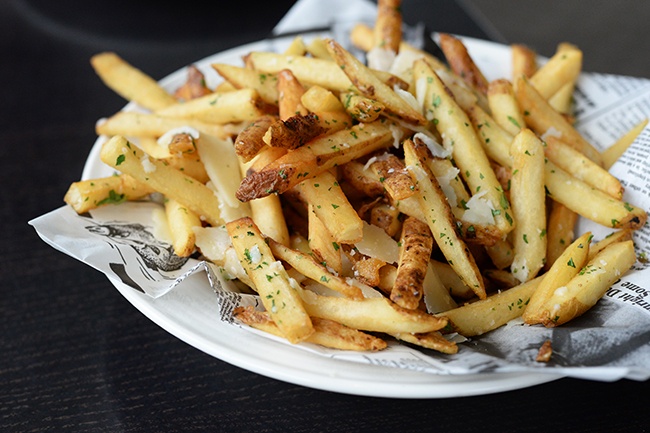 This is my second week of entertainment from Fourplay, and I haven’t been disappointed.

I’ve arrived a little earlier this time and I get the chance to see the last minute preparations for tonight’s show. Jason and Corina (Sean & Heather – not yet in character) are doing some last minute rehearsal, and Director Myriam Steinburg is putting the finishing touches to the set. There’s a heavy playing card motif at work here – which makes sense, since magic and illusion is going to a central theme of the evening.

I’ve got time to grab a few photos before I head back upstairs to join the other guests and Myriam gives us our briefing for the evening: cell phones are to be switched on, audience members are encouraged to talk to the characters, offer them advice and generally get involved in the performance.

For those of you who didn’t catch my review of last weeks show perhaps a little explanation is in order; Fourplay is a piece of dinner theatre by In House Festival which charts the progress of a relationship between two not-so-strangers across four episodes, all held in Gastown’s Salt Tasting Room. The twist? There’s no stage and no curtain – our characters are our fellow diners sitting among us at the table chatting with the audience and, on more than one occasion, seeking our advice our help in the tribulations of their romance. This performance doesn’t finish at the end of the night however – we can follow Heather on Twitter (@Hthr4ptHarmony) to track the progress of the story between shows. Fourplay blurs the line between the audience and the characters during the show itself and in the online world.

This week we see Sean and Heather around a year into their relationship. I must confess, I do miss their bickering from episode one (is there anything better entertainment than a public argument?) but the characters still have the awkward charm which made them so endearing last week. Without giving too much away, their relationship has moved on over the last 12 months and Sean has a very important question to pose to Heather, if he can only get the chance to ask it.

As with last week’s show episode two features a supporting character in the form of Travis Bernhardt, a Vancouver based magician. I always think pulling off a magic act well is tricky – you have to steer clear of the smug, pseudo-mystical nonsense of David Blaine – but Bernhardt does a fine job. He’s funny, accessible and able to poke fun at himself as well as the audience. We’re treated to a mixture of close up and stage magic including one amazing trick (I won’t give away specifics) that involves the entire audience. Bernhardt is a part of Sean and Heather’s story as well, serving as a constant foil to Sean by blocking his efforts at every turn to pop a certain question to Heather.

As with last week, the food is excellent. Jason (as Sean) announces that he has personally selected tonight’s menu to symbolize his feelings for Heather. Cue a series of groan-worthy puns (think ‘Apple of my eye), which, despite my best efforts, I still find charming. The Heather Group’s head chef Alain Chow oversees the four-course dinner and the effort he’s clearly put in is well worth it.

The food is delicious, the company is great, the atmosphere is relaxed and the addition of Bernhardt makes the whole experience different enough from part one to keep me entertained and excited to see what they will come up with next.