I’ve finished my dinner, left the restaurant and boarded the bus home – but the show isn’t over. I’ve just finished watching the first performance of Fourplay; a piece of live theater that’s playful, inventive, entertaining and, by degrees, genuinely touching. But this play has added another dimension to the characters I’ve come to know over the past 2 hours – once the performance finishes I can log on to twitter and have a window into their thoughts, their feelings and the progress of the relationship between them that I’ve watched spark into existence tonight.

Arriving at 7:30 in the cozy and relaxed atmosphere of the Salt Tasting Room, there’s time for a drink and a chance to meet the rest of the audience. Before we’re ushered downstairs into the Salt Cellar that will serve as the theater director Miriam Steinberg explains a few peculiarities of tonight’s performance – we MUST keep our cell phones switched on and, if we’re willing, anonymously leave our numbers on the wall. This show is taking audience participation to a whole new level – any of us might be called upon to step into the action, helping to move the story forwards, taking texts and phone calls from the characters, becoming part of the play.

Downstairs we’re introduced to our narrator for the night’s entertainment – Deneh Thompson playing an amiably eccentric scientist – explaining that what we are not about to watch a play at all, but rather his grand experiment into the nature of love and relationships; an investigation of how we react differently in romantic situations when we think we are being observed. Thompson is great in the role adding to a dash of the absurd and wonderful to a play grounded in reality.

I already know the venue, and I know there’s no stage, which rather begs the question of how the Salt Cellar is going to host a play. Regardless we’re seated at the large communal table – informality and making new friends over dinner is definitely encouraged at this performance – but two seats opposite me are still empty. Two late arrivals appear and are about to fill them, but it appears the pair already know each other and aren’t best pleased about it.

These are, of course, the cast, but it takes me a minute to realize it. Without giving away too much of the plot, the awkwardly loveable pair (played by Jason Harder and Christina Wells Campbell) explain the origins of their animosity in a noisy and public argument across the length of the table, bringing up old rivalries and showing that both can bear a grudge. However, it seems that the pair have another connection that they aren’t aware of – their online personas feel quite differently than their real world counterparts.

There’s no formal intermission and no need for one. Our food arrives (a Red Pepper Poup followed by an Arugula Salad and a Turkey Stew, courtesy of Alain Chow, one of the head chefs at the Heather Hospitality Group) and the cast, guests as much as the rest of us, take a break from their performance to eat with us. It’s a wonderfully informal atmosphere and the audience are soon comfortable intervening in the tribulations and squabbles of the cast without needing any prompting – the issues the pair bring up clearly touch nerves on both sides of the never-ending battle of the sexes.

Thomson’s character serves throughout as a witty plot device, freezing the other cast members in time and granting the audience a window into their private thoughts, bringing us back to his original question of how we change our behavior when we know we are being watched. Periodically audience members are contacted by the cast as well – text messages and phone calls arrive from the characters seeking advice or urging the audience to intervene. 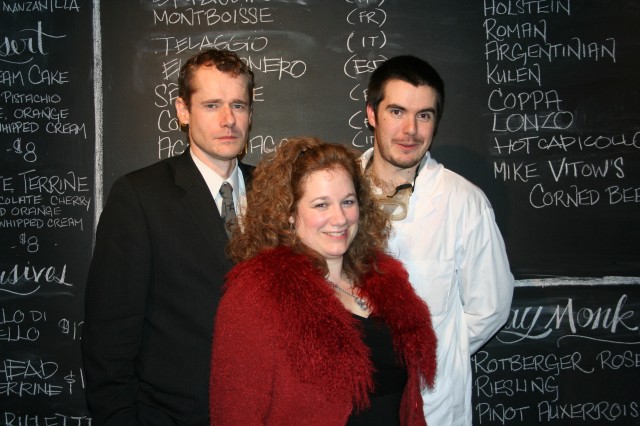 On the bus home I’m checking my cell, hunting for the next tweet from @Hthr4prtHarmony. I’ve enjoyed good food, good entertainment and good company with the lines blurred between them all. Dinner is part of the show and the rest of the audience, myself included have been part of the play. Part 2 of Fourplay, scheduled for the 20th of this month will give us another window into the lives of our characters a year into their relationship. Until then, I’ll have to be satisfied with the glimpses I can get of the story through Twitter and Facebook, and for those of you that missed part one, you can keep up with the story in just the same way.