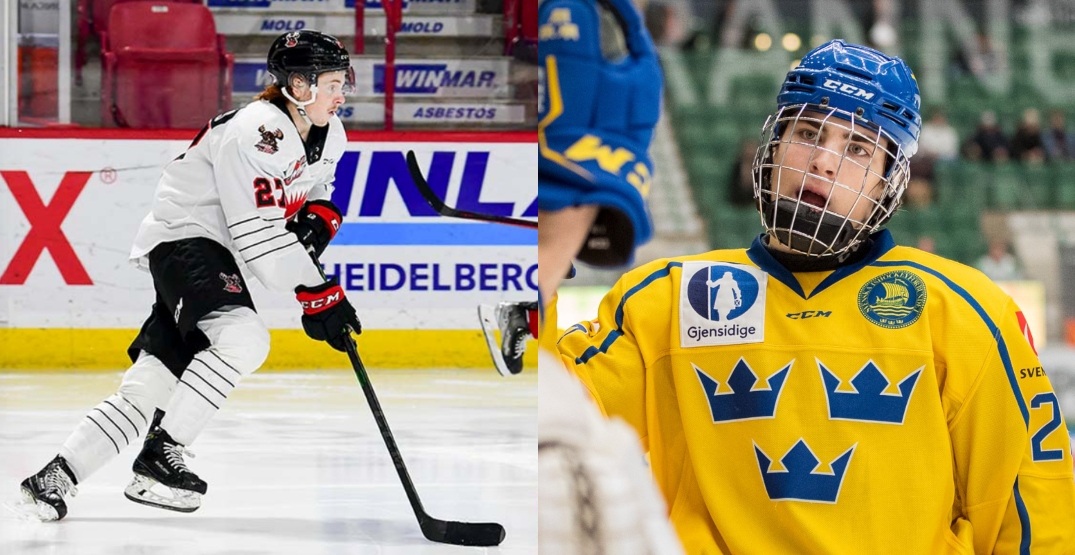 The Vancouver Canucks will have a new management team in charge of the draft for the first time since 2014. The intrigue of who they might select, what they might do with the 15th overall selection, and what the organization values in players, is palpable.

After profiling potential defenders the Canucks could draft, today we’re looking at a cross-section of forwards who could be available when Vancouver steps up to the podium on July 7.

The following players all represent a different package of sense, tools, and projection, and while some might be gone by the time Vancouver is on the clock, players in this range are very close, and all represent solid options to help propel the organisation forward.

Liam Öhgren has had a busy season to say the least. Across the year, the Stockholm-born winger has split time between the Swedish Hockey League, the J20 Nationell, and various international tournaments, even captaining Team Sweden in the World Junior U18 tournament.

Öhgren pushed a large volume of shooting across the season, and it’s not a surprise how he did it. A proactive mover to high danger areas in the middle of the ice, the Swedish winger does an excellent job timing his activations, blending handling to work past contesting defenders, and flexes an above average shot, highlighted by a violent wrist fold as he releases.

While he’s a fairly average skater, Öhgren employs tactile bursts of pace. Watch as Öhgren attacks defenders’ triangles, changes the angles of his shots, and take note of his puck placements when he fires off his shots:

While Öhgren’s shooting ability is an easy stand out feature of his game, his vision and playmaking ability represents a more translatable aspect of his game. Constant slip passes, often through intense defender layering highlight his ability. He passes into space, will actively move to open up new passing lanes, and ‌has a lock on teammates positions.

Projection: Öhgren profiles as a complementary player who can help a high-end centreman produce. Flexible because of his tool and sense blend, he has a top-six projection in the NHL.

Marco Kasper made the jump from U18 Austrian league play to the Swedish hockey circuit in 2020. Since then, the Austrian-born centre’s play has earned him a spot with the pinnacle of hockey in Sweden, the SHL.

The 18-year-old was an impact player across his minutes this year for Rögle BK, regardless of his production. His work culminated in a dominant playoff performance where he put up six points in 13 games. Kasper captained Austria at the World Juniors last winter and played in the men’s World Championship this spring as well.

Kasper is a pace merchant. His motor, will, and ability to work in-and-around the net front creates an extremely translatable package. Able to handle pucks in-tight, fight through pressure, protect using superior body-positions, and retrieve end-board pucks through his forechecking and physicality, Kasper constantly is pushing advantages.

In transition, the Rögle BK winger flashes more skill. He sets up his handles with hip-pocket holds, pushes off with his outside leg to create deceptive weight-transfer rush patterns that always devolve inside, and he layers NHL average shooting and passing ability.

Projection: Kasper possesses both a high floor and a high ceiling. He may top out as an extremely valuable middle-six player who pushes pace and hard skill, but it wouldn’t be shocking if his tools continue to expand to ‌where they grade above the NHL average. He’s well liked in the industry, and will probably be gone before pick 15.

Conor Geekie’s Winnipeg Ice team has been thoroughly combed over by scouting staff across this entire season. Geekie, along with Matthew Savoie and Mikey Milne, headline draft-eligible fire power for the Winnipeg-based club.

The mammoth 6-foot-4 centre is the younger brother of Morgan Geekie of the Seattle Kraken, and was the second overall selection in the WHL draft in 2019.

Geekie’s rush creation was monstrous this season. Able to drive into power moves, dropping his shoulder into net crashing attacks, he is also an unabashed attacker of the middle of the ice while on-puck, flashing puck handling and shooting ability.

He has a ton of passing skill, implementing hook passes, slips in motion, and one-touches. While he is rather imposing at the WHL level, ankle-flexibility and the cascading effects that has on his stride causes some translatability concerns. Will he be able to power past NHL defenders and blend his skill? He could with some improvement, which is a tantalizing proposition.

In sustained pressure, the Manitoba-born forward is a net-front occupier, timing movements and exploiting his size advantages. Able to handle off the walls and into the inside, this will only expand if he can become a better mover.

Projection: There are real scenarios where Geekie ends up being a premier player of the draft because of his size, skill, and tool blend. Added ankle flexibility will expand his entire game and allow for Geekie to push a power game at the NHL level. If not corrected, he could easily work into a role as a skilled middle-six centre role.

Other than having the best name in the draft, Jagger Firkus was an extreme climber in public draft rankings. While the Alberta-born centre is exceedingly slight at 154 pounds, he still managed to not only score the most goals of a draft-eligible WHLer, but also the second-most points, behind only Winnipeg’s, Savoie.

If Firkus isn’t the best shooter in this draft, he’s undoubtedly in the top-three. Possessing a hair trigger, angle-changing release, and full selection of shot variety, including cross-body attempts, the slight centre is a sniper in every way.

Part of Firkus’ success is his occupation of high-danger areas, and ability to handle into these areas. Toe-drag dekes into wrist shot opportunities represented some of his best sequences this season.

Arms-unlocked-from-body handling ability, blended weight-shifts, and sharp lateral cuts allow Firkus to get the inside. A dual-threat scorer, the Moose Jaw Warrior can also finish in-tight.

Projection: While Firkus handles physical pressure on the walls fairly well for being 154 pounds, he’s at major risk, even at the CHL level, of being physically dominated. He has top-line potential, and has the tools/sense/ability to overcome his size, but he will undoubtedly have to put on weight to survive the rigours of the NHL.