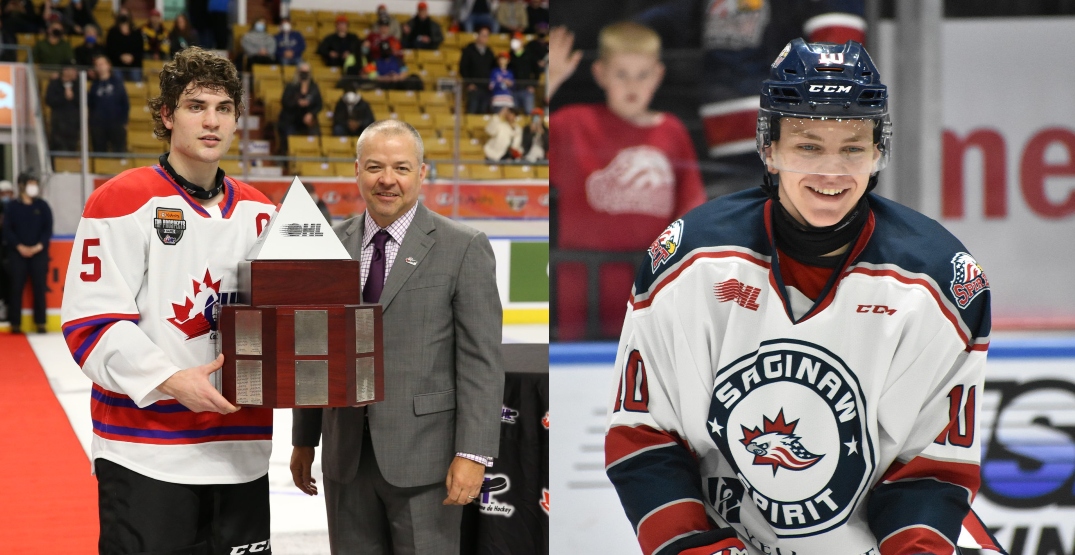 The 2022 NHL Draft is nearly upon us, representing one of the major focal points of the offseason.

The Vancouver Canucks hold the 15th overall selection, and barring a trade, is their only selection in the first 73 picks — a significant launching point for an organization full of fresh faces and decision makers.

With the Canucks’ prospect pool needing high-end elements at every position, selecting the best available player will be key for providing the maximum asset value in the coming years. But all things being equal, they’d surely love to add a defenceman.

While variance and unknowns can create added uncertainty when you are picking near the middle of the order, we can still dive into a group of players who may be available when the Canucks step onto the stage in Montreal on July 7 — starting with defencemen.

Beyond Slovak defender Simon Nemec and Czechia-born David Jiříček, whose play this season should push them to near the top of the draft, a second tier of blueliners exists.

Here are four defencemen the Canucks could consider drafting.

Hailing from Winnipeg Manitoba, Denton Mateychuk showed out in his second Western Hockey League season for the Moose Jaw Warriors. The left-shot defender put up big numbers, scoring 64 points across 65 regular season games this season, good for first in points-per-game for defenders across the WHL.

The 5-foot-11, 187-pound defender is one of the best dictators of pace in the entire draft, as a commanding on-puck presence who infuses high-end tools and sense to manipulate advantages all over the ice.

Play on the ice bends to Mateychuk’s whim, all centring around his hockey sense. East-to-west activations through his four-way mobility, a delay game, a penchant to move pucks wall-to-slot puck, anticipation to jump into lanes to counterattack, and constant slot passes; it really looks like Mateychuk plays as freely as possible.

Projection: Mateychuk has all the tools and sense to run his own pairing while pushing strong defensive results. A top-four projection isn’t out of the question, as a player who can contribute across all special teams and drive offence.

Pavel Mintyukov, a Moscow-born defender, was one of the most productive blueliners in the Ontario Hockey League in the 2021-22 season. So productive, in fact, that the left-shot defenceman’s 62 points across 67 games was third across all OHLers and first among draft-eligible defenders.

The 6-foot-1, 192-pound blueliner was the Saginaw Spirits’ offensive catalyst this season, pushing otherworldly activations off the blue line, one-on-one handling skill, and high-end shooting ability that almost allowed him to score 17 goals across the regular season.

An uber-aggressive defender off the rush, Mintyukov would rather kill controlled entries high in the neutral zone, then let clean entries. This aggression pays off consistently, but he can get caught high as play breaks the other way.

Projection: Mintyukov has true top-pairing upside, the tool and sense blend to push high minutes. It’s unlikely that he will be available at 15, as sky’s-the-limit for the offensively inclined defender.

Saskatoon-born Kevin Korchinski is a bit of an enigma. A gifted playmaker off the blue line, the 6-foot-2 185 pound defender is practically a human highlight reel in the offensive zone. Korchinski pushes an inordinate amount of dynamism on-puck, flashing handling and shooting skill, all while activating to open up new passing lanes that he can layer the puck through.

Through 67 regular season games, Korchinski produced 65 points — first overall for draft-eligible defenders in the WHL. While he only scored four goals in 67 regular season games because of poor shot locations, Korchinski was able to find the back of the net six times across 17 playoff games. This is only an area that will grow, as his shot possesses the proper mechanics to do damage.

Where Korchinski becomes an enigma is in transition and in his own zone. He becomes far too static as he breaks the puck out, leading to nuclear meltdown-level errors. Even when he carries the puck in-motion, he holds the puck in front of his body,  devoid of protection.

Korchinski refuses to defend with good body positioning, often facing away from attackers. This is a byproduct from stride inefficiencies and decision-making issues. He chases in his own zone, stacks with teammates, and often loses his check.

Projection: The left-shot defender has every offensive tool to do damage on a power play unit at the NHL level. For projection-sake, he must become better at defending, or NHL coaches will have trouble letting him capitalize on the offensive end of the puck.

Manitoba-born defender Owen Pickering stands at 6-foot-5, with an extreme amount of room to grow. At 179 pounds, the left-shot defender isn’t even close to reaching his professional weight. With that, a lot of Pickering’s game is based on projection, because the runway he needs is significant.

Pickering, who put together a 33-point season with a young Swift Current Broncos team, showed some positive habits across his play this season. He’s a great activator on and off-puck, understanding high-danger areas, often planting back-door, or cutting to the inside off the walls to push high-chance offensive sequences.

Pickering’s shot attempts, while limited in volume, often create second-chance offence through rebounds. He is also strong off the rush, popping into high-danger areas as a trailer. With added strength, tools like his shot and skating ability should only become heavier and more explosive, respectively.

In Pickering’s own zone, while he doesn’t really exploit his huge physical advantages as much as you would like, he consistently locks down secondary-threats, and is aggressive with his use of his range to poke pucks away. He can be over-committing and can miss threats in his peripherals because of a lack of scanning, but the size/close out potential is so strong.

Projection: With an active enough imagination, the thought of a 220-plus, 6-foot-5 defender, who pushes solid offensive habits, is pretty enticing. A top-four projection isn’t inconceivable.