Well, there you go. @EdmontonOilers made it official. Kassian for Scrivens. Because Kassian cleared waivers pre-Xmas, he can start in AHL.

No collective fanbase seems to irrationally hate Zack Kassian more than Oilers fans, so I really hope they trade for him. It'll be funny.

Sometimes things happen in sports that make you laugh.

Case in point, Zack Kassian being traded to the Oilers of all teams.

You have to remember, the Oilers are a fan base that once wondered if criminal charges should be laid against Zack Kassian for an errant high stick on Sam Gagner that ended up breaking the Oilers player’s jaw (or deliberate high stick as argued by some).

They are also a team that once had the media ask then coach Dallas Eakins why the team had let Kassian “run their show” and were openly wondering why retribution hadn’t been handed out.

Many people around the league had come to realize what Kassian was: A big body who had a decent shot, underrated play making skills, but not the great white unicorn power forward people had hoped he would be coming out of Juniors.

In Edmonton, though, he became a larger than life figure of sorts. A monster in the shadows, sent out to destroy everything Edmonton loved and held dear to their hearts.

And to be fair, Kassian had some of his best troll moments in Edmonton.

Who can forget him standing up in the penalty box celebrating a goal in Edmonton:

Or Kassian sarcastically clapping for a ref in Edmonton:

Or him just mean mugging the Oilers: 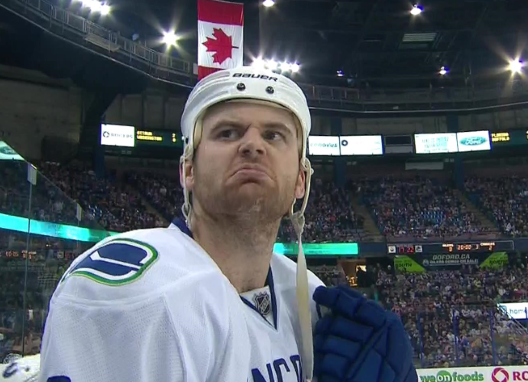 So you can excuse many in Edmonton for getting caught up in the Kassian hype-train. He’d injured some of their players, he was constantly chirping their guys, and in the zenith of his “Troll Edmonton” movement, it looked like he made fun of Gagner’s face shield.

He broke the man’s jaw, then mocks him for it? Ice. Cold.

The problem with getting caught up in the “Kassian is a monster” narrative, though, is things like this:

@Bob_Stauffer @SportsnetSpec Oilers should of grabbed Kassian would of been a protector for McDavid .

I think it’s safe to say at this point that Kassian is not, and never will be, a player who protects other players with revenge hits or fights.

Yes, he will drop the gloves and throw down, but he doesn’t do it as often as you think. Aside from his second year in in the OHL (63 points in 61 games, 13 fights), he usually averages less than five fights or less in a season.

As for hits, he really doesn’t land many big ones, at least not in the way you’d imagine a 6″3 220 pound player might.

As many fans in Vancouver witnessed, even his protection of the puck wasn’t what you’d expect from a player of his size.

It’s not just Edmonton that has these expectations, though, as even Montreal bought into the power forward hype train, wondering if “the Canadiens found the power forward they have been looking for” when they traded for him at the 2016 draft.

Vancouver wondered the same thing when they traded for him from Buffalo.

Buffalo wondered the same thing when they drafted him.

It’s as if the idea of Kassian being a power forward is something teams are reluctant to let go of. If he doesn’t go out and start dropping people with huge hits and bull rushing to the net, teams start viewing him as not playing the way they feel he should.

That’s not to say Kassian doesn’t have a viable skill set at the NHL. His speed is decent, his shot is good, and he can pass the puck. He might well be a very useful bottom six player in the NHL. He managed to get 10+ goals in two of his three seasons in Vancouver, playing with less than ideal line mates at times (shout out to Tom Sestito). It’s not crazy to think he might provide some offensive punch if given another shot.

You also have to wonder how much his off ice issues derailed his on ice play, as well.

So there is definitely something to be said for rolling the dice one last time on Zack Kassian, especially if he finally has his head on straight. There have been far more head scratching projects than Zack Kassian in the NHL (shout out to Tanner Glass).

Edmonton just has to accept the fact that Kassian is not likely going to be a power forward, kicking ass, and taking names.

For Vancouver fans, though, sit back and enjoy watching Edmonton fans try to come to terms with a previous public enemy number one joining their ranks.