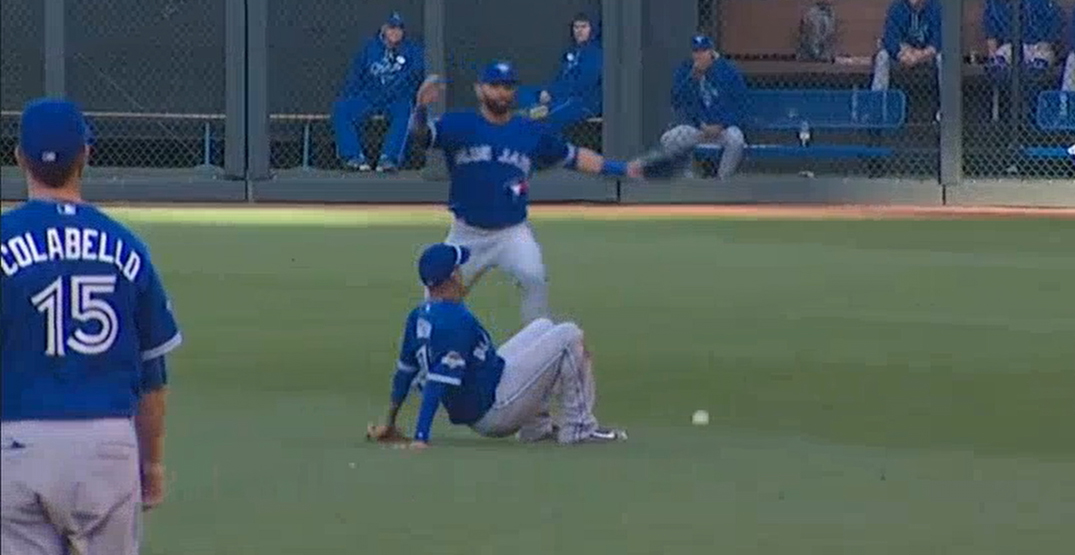 The 2015 Toronto Blue Jays had a magical season, but they didn’t get the fairytale ending everyone was hoping for.

Despite capturing the AL East title that year, making the playoffs for the first time in 22 years and dispatching the Texas Rangers from the ALDS in dramatic fashion, the Blue Jays came up a few wins short of the World Series.

Had a few key plays turned out a little differently in Games 2 and 6 the ALCS against the Kansas City Royals, maybe things would’ve ended much differently for the 2015 Blue Jays.

Game 6 featured a handful of turning points, but there’s one play from Game 2 that always sticks out in Blue Jays’ fans minds: the dropped pop up between Ryan Goins and Jose Bautista.

Almost six years later, there’s a little more insight into how that key play unfolded, which led to the Royals rallying for five runs in the bottom of the seventh inning and winning Game 2.

“You go back and you think of the play in the little triangle between GoGo and Bautista when a fan yelled: ‘I got it, I got it,’ and they both pulled up. That was the end,” Thole explained.

According to Baseball Reference’s Win Probability chart, the Blue Jays had an 87% win expectancy heading into the top of the seventh inning of Game 2 with nine outs left to play.

David Price was cruising towards his first postseason win as a starter, pitching six innings of shutout-one-hit ball against the Royals. It wasn’t until that fateful pop fly by Ben Zobrist landed at the feet of Goins that the game unravelled for the Blue Jays.

“I stuck my glove up, I thought I heard something, but it wasn’t, so I didn’t go after it aggressive enough,” Goins told Richard Griffin of the Toronto Star. “It dropped, and that was it. It led to a big rally by them. I just thought I heard ‘I got it,’ but it was nothing.”

While Goins came out and took the brunt of the blame, Bautista had curt answers when he spoke to reporters post-game. When asked about the confusion in shallow right field, Bautista said: “There was no confusion. I don’t know what you’re talking about.”

After rewatching that scrum, it’s easy to see how some could construe Bautista throwing Goins under the bus for that play. With the Blue Jays having lost a pivotal Game 2, he likely wasn’t in the mood to talk about a botched play that became a turning point for the Royals.

After the dust settled a few days later, Bautista took his teammate on a shopping spree to Canada Goose to help bury the hatchet.

Right after that misplay in right field, TV cameras captured a brief exchange between the Blue Jays teammates. After analyzing this clip dozens of times, my best lip-reading attempt I can make of the exchange between Goins and Bautista went: “I had it, did you say stop?”

This is totally unrelated to tonight's game, but by chance are there any amateur lip readers out there who could help decipher this?

Bautista said he heard someone call him off, so he backed off, assuming it was his second baseman taking charge. Goins also thought he heard something, but given the excessive crowd noise at Kauffman Stadium, both scenarios are probable.

It all lines up with what Thole said on the podcast and what Goins remarked initially, that Goins thought he heard Bautista calling for the ball.

Along with the disputed home run call from Game 6 and the questionable strike three call to Ben Revere in the top of the ninth inning, the ball that landed in the Bermuda triangle between Bautista and Goins will haunt Blue Jays fans for years to come.

Given the passage of time, the wounds from the 2015 ALCS haven’t quite healed yet, but fans can take solace with an explanation for at least one of the turning points in that playoff series.