The Bank of Montreal’s chief economist seems to think foreign investment is a key driver in out-of-control Vancouver housing prices.

Douglas Porter says that home prices tend to ebb and flow with household credit growth, but in the last year, home prices have shot up while credit growth has remained steady. The only exception was during the 2008 financial crisis.

He admits the follow chart doesn’t fully prove their point, as they’re going on anecdotal evidence that foreign buyers don’t borrow money when purchasing a home. 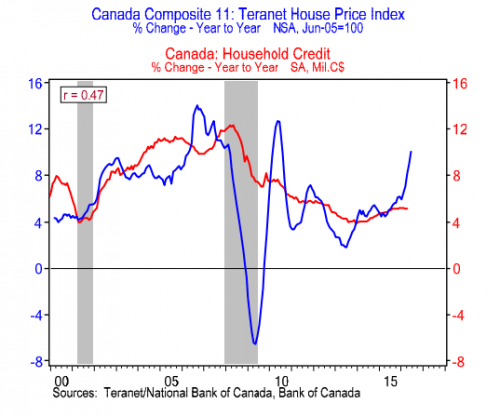 “Something besides domestic borrowing has clearly fanned the flames,” Porter said in his report.

Porter says condo prices have increased 25% year-over-year due to a 19% spike in condo sales in June. He thinks that “lean inventories and a mad scramble for affordability” might keep prices high this year; however, he notes prices could come down due to record construction numbers in Vancouver – 23,700 units are being built as we speak.

“The region needs up to 20,000 housing units per year to meet demographic demand and it normally takes three years to complete a condo tower,” notes Porter.

“If speculation is also driving prices higher and causes overbuilding, then prices could cool a lot faster.”

Porter isn’t the only economist who believes foreign investment has a stronghold on the city. Daily Hive recently spoke with UBC Sauder School of Business’s Thomas Davidoff to weigh in on whether or not Vancouver is in the midst of a housing bubble. He said as long as foreign investors continue to flock to the city, things will likely continue on an upward trajectory.

“When demand grows, we don’t get more supply, so much as we get higher prices,” he told Daily Hive. “In the long run, there’s going to be more rich people chasing after Vancouver real estate for sure – in the last year, we know there’s been an exodus of money from China.”