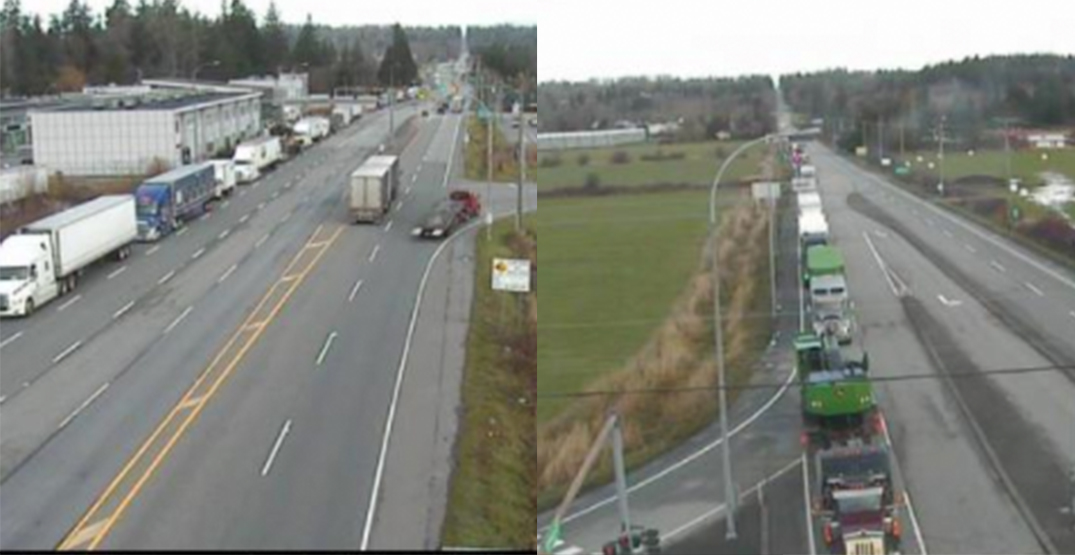 Many residents of South Surrey have seen longer-than-normal lines of transport trucks trying to cross the border this week as flooding, construction, and highway closures snarl traffic at the Pacific Highway crossing.

Pacific Highway connects South Surrey with Blaine, Washington, and is used by big rigs that are prohibited from crossing at Peace Arch.

Dave Earle, president and CEO of the BC Trucking Association, confirmed to Daily Hive that lines have been long lately at the Pacific Highway crossing. Much of the extra volume is because the nearby Sumas crossing is closed due to flooding in Abbotsford. 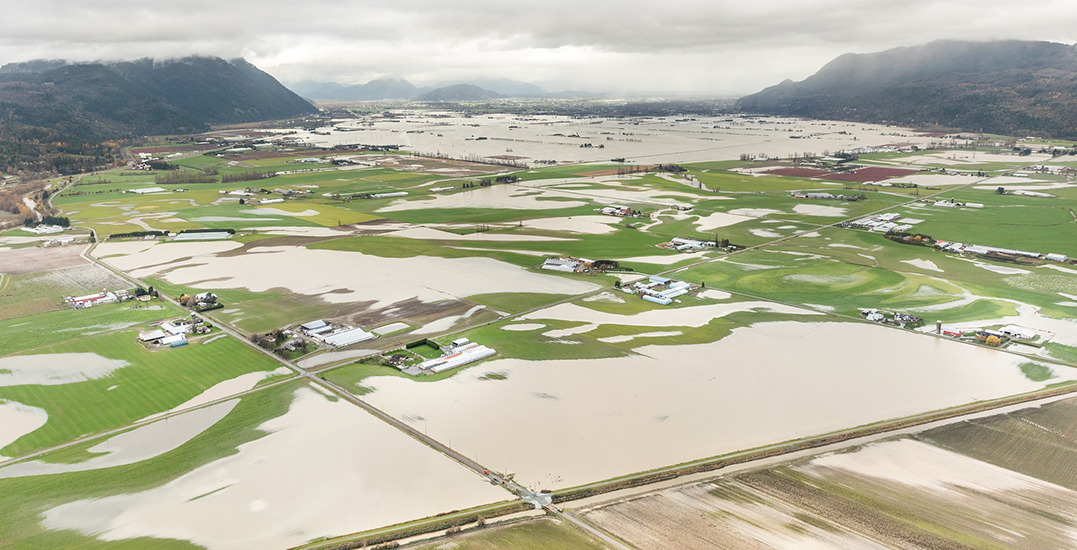 Flooding in Abbotsford has forced the Sumas border crossing to close. (BC Gov/Flickr).

“This work was planned and begun long ago as winter is usually a lower volume period, and CBP is working to streamline processes where they can,” Earle said.

What’s more, some trucks are diverting through the US to deliver goods to BC’s Interior while the Coquihalla and Highway 1 are closed.

A Daily Hive reader sent in photos Wednesday morning of trucks lined up all the way across the Highway 99 overpass at 8 Avenue in South Surrey, suggesting the line stretches longer than images seen on DriveBC webcams. 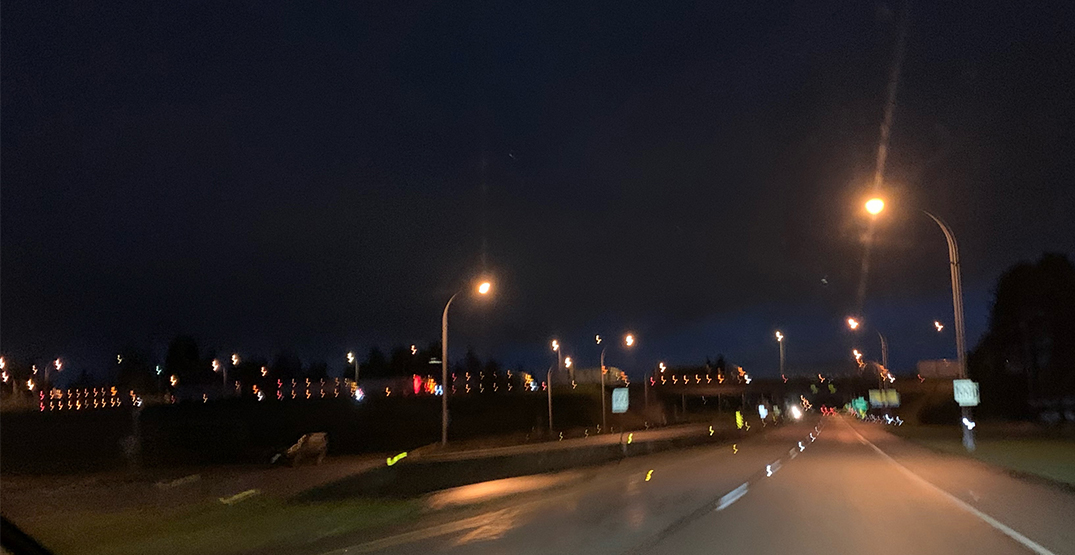 Trucks lined up at the Highway 99 overpass at 8 Avenue in South Surrey. (Submitted)

That overpass is quite far from the border crossing, and the reader said the trucks appeared to be at a standstill waiting for the line to move. 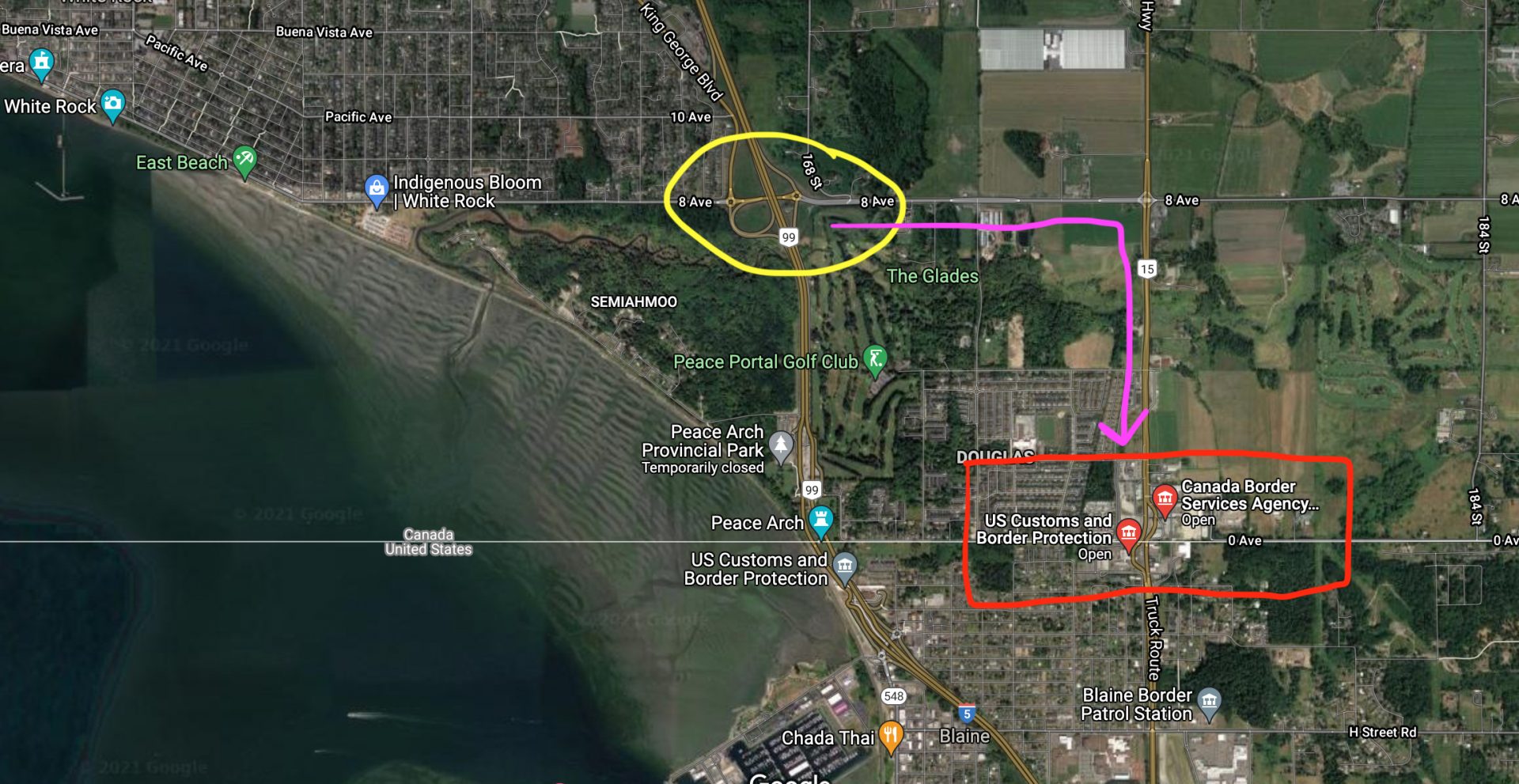 The yellow circle is where trucks are backed up to, and they follow the purple route to the border crossing circled in red. (Google Maps)

Other nearby residents have taken to social media to share that the long lines of trucks are making regular driving difficult.

Canada and the US came to an agreement last month to allow some truckers to bypass the usual red tape around working in the US to deliver goods to BC’s Interior. Several of the province’s major highways remained closed due to flooding and washouts from a record-setting atmospheric river in mid-November, and some trucks are re-routing through the States to deliver goods.

There’s no word yet on when the Sumas-Huntingdon border crossing will reopen. It connects Abbotsford with Sumas, Washington, and is impacted by Sumas Prairie flooding. Abbotsford Mayor Henry Braun was optimistic at a news conference Wednesday that flood waters could recede in the coming days with no new rain expected.