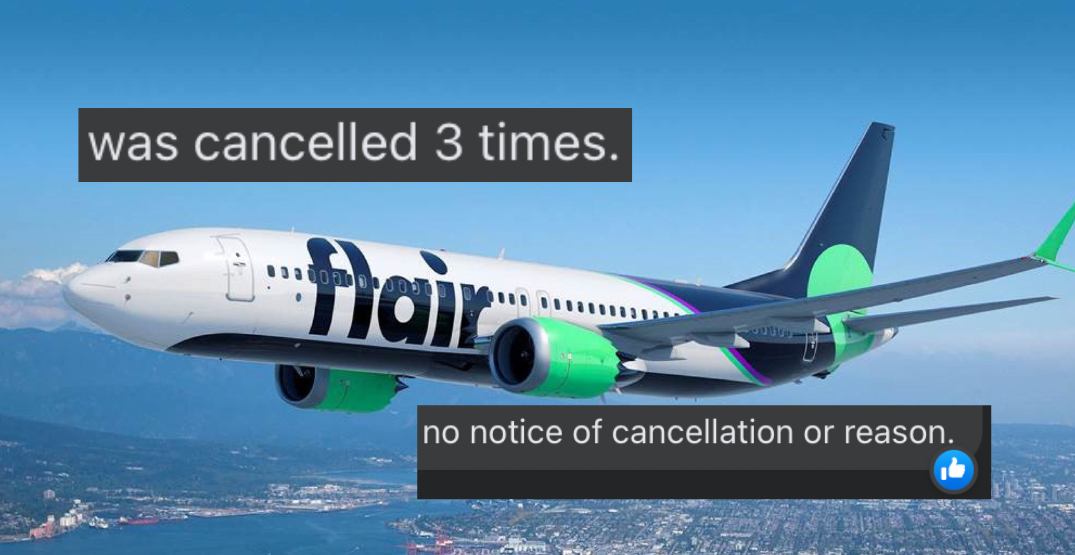 Canada’s low-cost airline Flair has apologized after complaints about its service went public.

Flair Airlines, which advertises ultra-low-cost airfare like its $29 flights from Victoria to Edmonton, has become an enticing option for travellers in Canada.

They often undercut airlines like WestJet and Air Canada with their cheap flights, and one customer tells Daily Hive that there’s another cost to the affordable tickets.

Kevin McElligott told Daily Hive that in April, he booked a flight with Flair to Anchorage, Alaska, from June 16 to June 20 for $300.

The flight was cancelled on May 31, a day ahead of an anticipated Canadian Transportation Agency decision on the airline’s status as a Canadian company.

“I think companies like Flair Airlines bank on customers to eventually forget their grievances and move on, but I just can’t abide,” he told Daily Hive.

“Although Flair cancelled our flights, we still had to go through the process of requesting a refund.”

McElligott isn’t the only one with grievances against the airline.

In a Facebook group called Flair Airlines Nightmares, members are sharing their frustrations with Flair’s service and policies.

From complaints of lost luggage and missing refunds to confusion over why flights were cancelled, one post keeps a running tally of members’ cancelled flights.

“We hate seeing customers feel let down, and we totally understand their frustrations,” said a Flair Spokesperson in a statement to Daily Hive.

“Flair is not perfect, but we’re trying hard. Sometimes events happen beyond our control, such as weather, maintenance issues or even bird strikes.”

Flair pointed out that per Canadian Aviation Regulations, there are strict rules around flight duty time limitations and rest periods for their crews.

“Our objective is to fly as many Canadians as we can at the very lowest fare, and we want to fly our schedule as planned.”

“We’re really sorry for anyone inconvenienced here, and on a case-by-case basis we try to remedy the situation.”

As for McElligott, he eventually got his refund but ended up cancelling his trip altogether after the ordeal.

“I am still upset about the late cancellation,” he said. He and his friend lost about $300 each on hotel bookings and race fees for a marathon they had planned to attend.

The Flair spokesperson said, “We fly upwards of as many as 400,000 happy passengers per month, and we want every single one of those passengers, young and old, to have a great experience with Flair.”