Tiananmen Square, Forbidden City, The Great Wall… Beijing’s got it all. But behind the bustling crowds are some hidden gems that will show you a new face to the capital city and its rich history.

Next time you’re in Beijing, embrace the madness around you and go local. Here are some of my favourite new discoveries.

Before the summer palace there was… another. Not far away from the attraction that everyone else goes to, you’ll find a European-style city lying in ruins. Yes, in the middle of China. 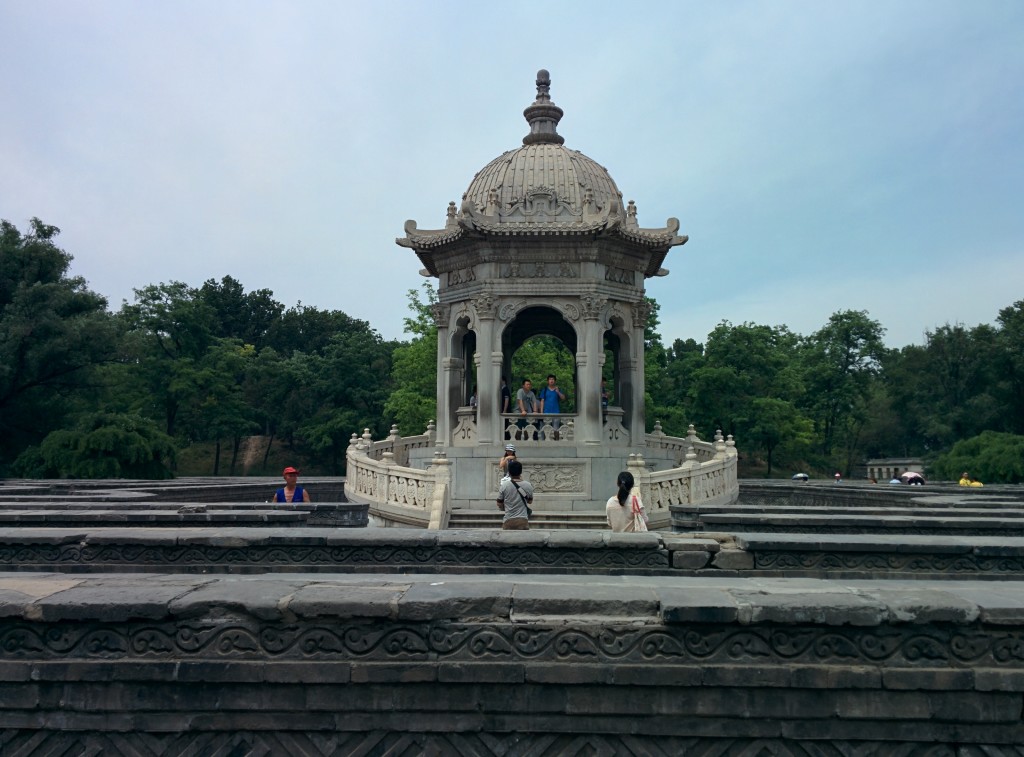 Back in the 18th century, or so Wikipedia tells me, Yuan Ming Yuan (圆明园) was built to satisfy the Qianlong emperor’s taste for exotic and foreign buildings. While only a fraction of the original site, the ruins are now among the only remnants left over after the Second Opium War. Instead of building over what was left, the ‘current’ Summer Palace (颐和园) was built not too far away, and was most famously reconstructed and enlarged by Empress Dowager Cixi.

Do both sites, if you have the time. You’ll probably want to hit the Summer Palace as early in the day as possible, to avoid the crowds and the ominous tour groups. Then, take the metro back two stops to the Old Summer Palace. The ruins are in the far back corner of the park (also: it’s a big park).

2. People Watching in the Forbidden City 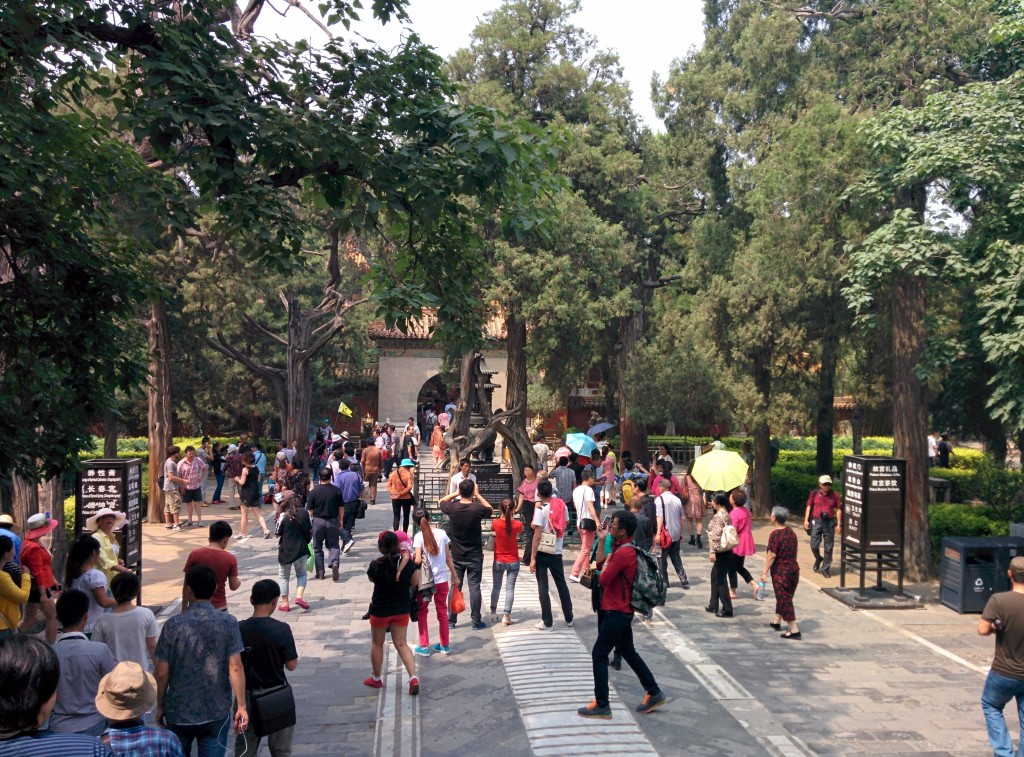 When you’ve had your fill of the majestic temples and halls around you, turn your attention to the crowds that you’ve been dodging all morning. As tourist capital of China, you’ll see some pretty diverse groups of people, all dressed up fancy for the pictures. (Yes, even in 40 degrees heat.) I’d recommend cooling your heels inside the Imperial Gardens towards the back of the Forbidden City, polishing off a popsicle (see below), and watching the crowds that are watching you.

3. Dining on the Run

Move over Peking duck, locals know how to grab quick and tasty dishes that are easy on the wallet. 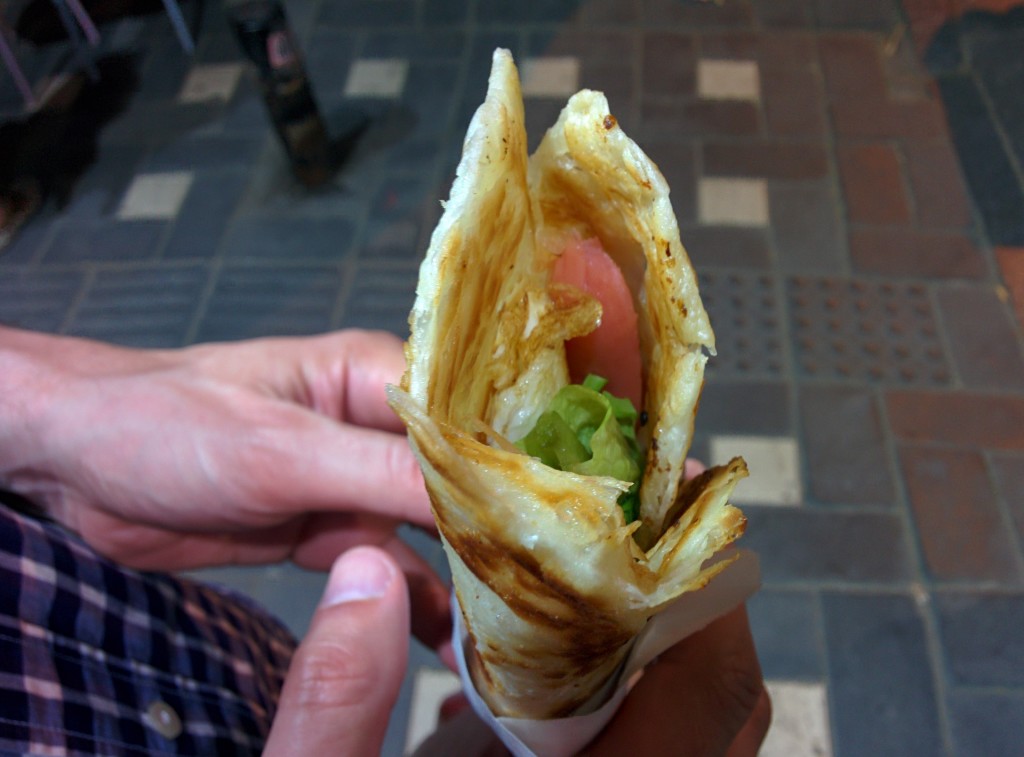 Crepes for Breakfast – Grab and go places are easy to come by, but my favourite Beijing breakfast has to be a Chinese crepe. You can find these little stalls huddled outside busy street corners, and for a few RMB, you get one custom made crepe with all of the fixings. 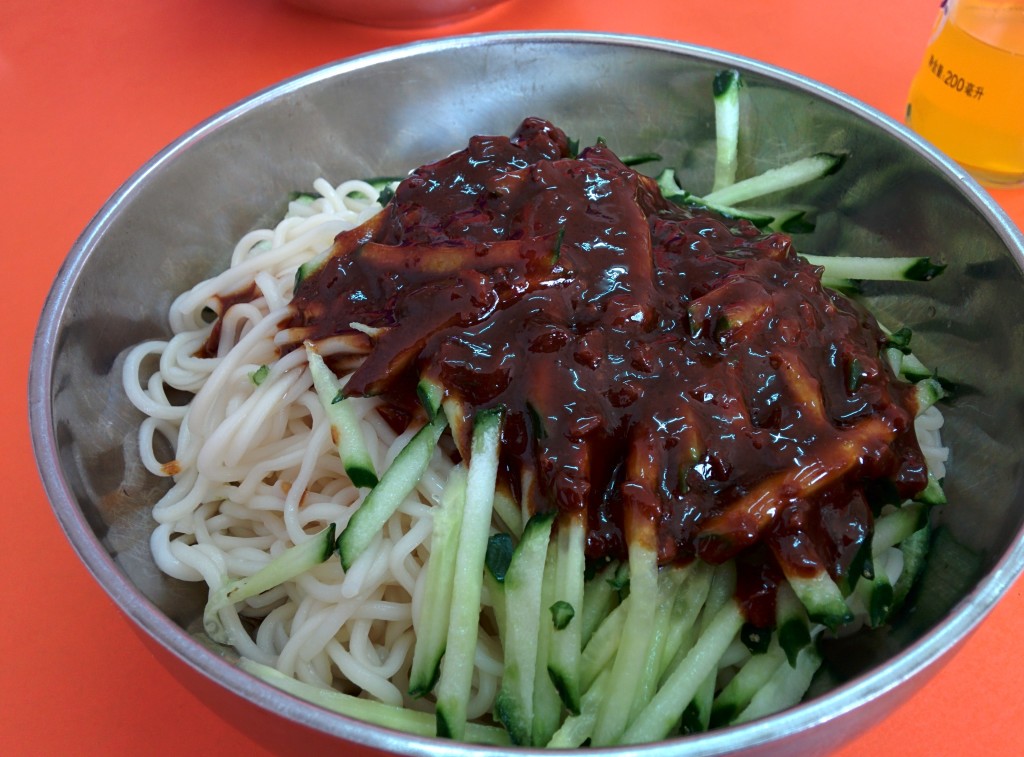 Lunch Favourites – Za jiang mian (炸酱面), or fried sauce noodles, is a refreshing dish for lunch. Have it cold – noodles mixed with a mysterious meat sauce and sliced cucumbers. Try it with some homemade dumplings or bao on the side. Basically rule of thumb – look for the cheapest, no-frills eatery around. If it’s packed, then it’s probably a good place.

Frozen Delights – you don’t know popsicles until you go to China. My favourites: green/red bean, or milky popsicles. Just look at the display and pick out what looks best! You can get them anywhere for a couple of RMB, and even within the most touristy of places, they still remain one of the cheapest and most satisfying options. 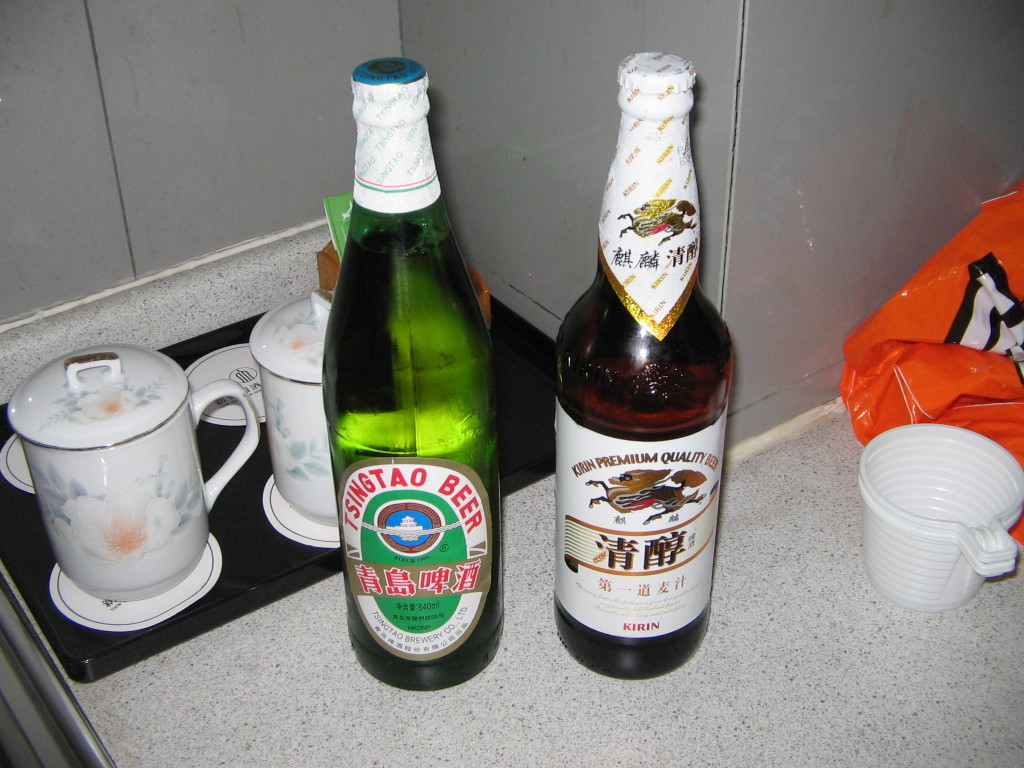 Local Beer – need I say more? Tsingtao is the most well-known brand, but there are tons of other domestic beers that taste pretty much the same. It’s more like beer-flavoured carbonated water, but at least it pairs well with almost everything. For the more adventurous, try rough-and-rocky Chinese spirit Maotai. 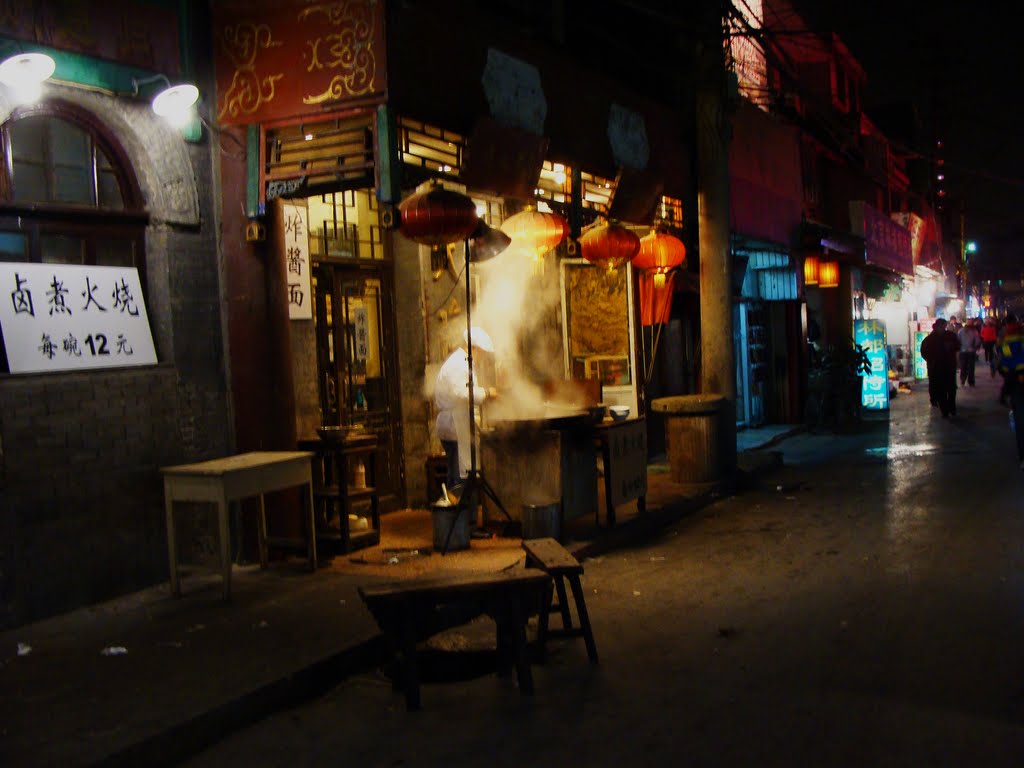 Sure, Beijing doesn’t hold a candle to Shanghai’s nightlife. But it’s got unique things to do at night, all situated in one of the coolest settings around. Hutongs are basically the old streets of Beijing, the narrow streets that outlined traditional family residences. While most have been demolished, there’s still a historical area brimming full of cool restaurants, bars, and youthful energy. You’ll find expats in droves, interesting un-touristy shops, and some cool local bands. A great place to cap off your night, or to start it before you take off to clubbing district Houhai (后海).

Full disclosure: I wasn’t able to make it there this trip. The day was hot, and the cab driver refused to take me. That’s right, you heard me – refused. (He told me that I shouldn’t take my white friends there. Nothing to see.) Challenge accepted. 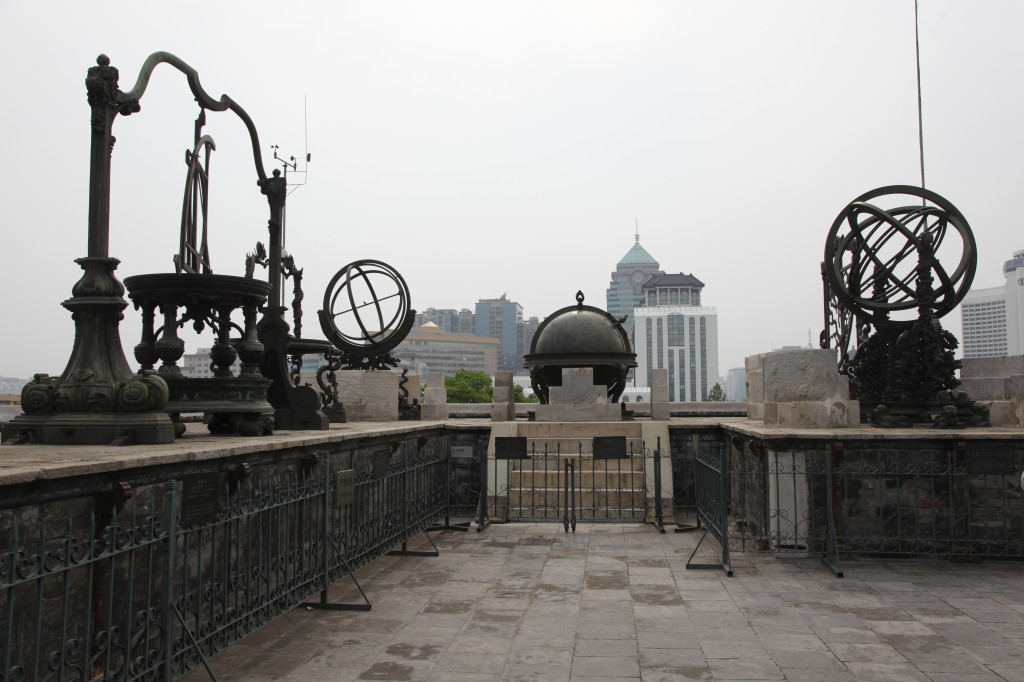 According to this page, the Ancient Observatory is worth seeing because:

Eight bronzed astronomical instruments stand on this platform, all of which are ornately carved, having been well preserved since the time of the Qing Dynasty. They are huge but exquisitely carved. The design of the instruments reflects both the influence of Oriental craftsmanship and European Renaissance understanding of measurements and physics.

What’s your favourite way to ‘go local’ in China? Let me know your best tips for my next trip!